The worldwide INTN headquarters is home to two cats, one of whom, Willow, has recently been treated for hyperthyroid disease. The treatment consisted of injecting her with low doses of radiation. This meant for the last two weeks we were not allowed to be closer than a foot to poor Willow for more than one hour per day to avoid becoming over radiated. We originally got cats because we were told they are solitary creatures and so our not being home a lot would be acceptable. We were misinformed. They generally follow us around from room to room and constantly want to be petted and when appropriate (which is often) fed. In fact, as I typed that sentence, our other cat, Putter, leapt onto the desk and waltzed in front of the screen, annoyed that I was paying attention to you all instead of him. So although our words may contain an extra radioactive glow to them this week, they also describe where manufacturing will locate in the future, what executives think will happen in China and what people around the world think is important for immigrants to do. It’s this week’s International Need to Know, the Schrodinger Cat of important international information, both alive and dead at the same time (nothing goes over better than a quantum mechanics joke).

Where Will Manufacturing Go?

Notwithstanding that all countries are likely to have fewer manufacturing jobs in the future, where will be the top centers of manufacturing in the coming years? Deloitte asked the question of manufacturing executives under the assumption that if anyone would know, these folks would.* It is no surprise that these executives rate China first for manufacturing competitiveness in the current year. But, perhaps, surprisingly, they believe by 2020 China will fall to number two behind the United States (this survey was taken before the U.S. election, btw, so current Trump Administration actions had no effect on these rankings). China slips because of its rising wages and a perception that the U.S. is well ahead of China in advanced manufacturing technologies. Overall, North America and Asia dominate the rankings with only the UK and Germany making the top ten. Perhaps the other headline lurking in the list is the executives’ expectation that India will rise to number five by 2020. We find this a rather bold and intriguing prediction. India’s continued economic rise would have implications far beyond manufacturing.

*As of yet, we take no position on whether this is a good assumption or not. Ask us again in 2020. 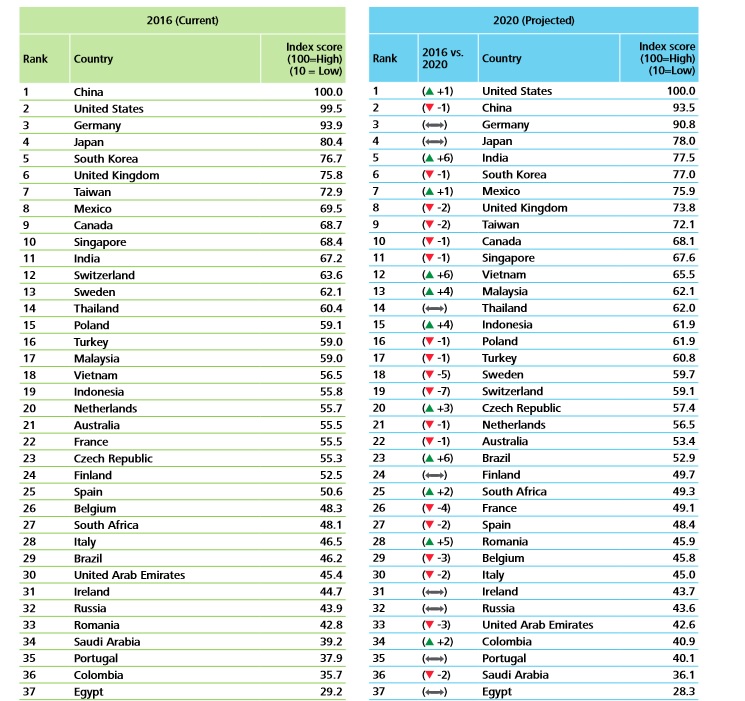 Speaking of China, Executives and Manufacturing

We don’t mean for this week’s edition to mirror the Trump Cabinet–full of business executives–but AmCham China also surveyed this prized and interesting species–this time ones in China, and it too provides much grist for the INTN mill. They quizzed the execs on a variety of issues for their 2017 Business Climate Survey. For the second year in a row, 25% of respondents to the survey reported they have moved operations out of China in the last three years or are planning to do so. And as we pointed out in this space recently, even as the U.S. pulls back from its world leadership role, China is a square peg for the round hole role of global leadership. According to the Survey, “More companies are slowing investments and deprioritizing China as an investment destination due to slowing growth and increased concerns over barriers to market entry, the regulatory environment, and rising costs.” Further, “Eight in 10 say they feel foreign companies are less welcome in China than in the past, and more than 60% have little or no confidence that the government is committed to opening China’s markets further in the next three years.”  It’s hard to see China as a leader on free trade when it has so many barriers to entry of its own. But, I guess that’s the world we’re living in now. 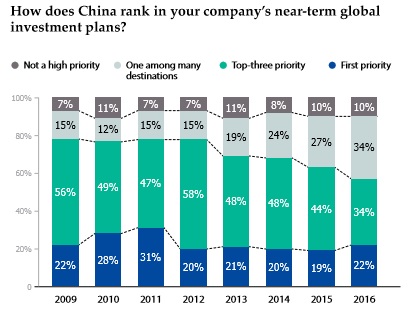 Unless you’re the Atlanta Falcons offensive coordinator and completely unaware of what is going on around you, then you have probably noticed that immigration has been in the news lately. So has the Pew Research Center which has a timely survey on national identity. It turns out that in many countries most people don’t view where a person was born as providing their national identity. Pew notes that “Only 13% of Australians, 21% of Canadians, 32% of Americans and a median of 33% of Europeans believe that it is very important for a person to be born in their country in order to be considered a true national.” You’ll see in the chart below that a few populations put a premium on where a person is born, such as those in Japan (no surprise), Hungary and Greece. Learning the national language is a bigger deal: “Majorities in every country surveyed say it is very important to speak the dominant language to be considered truly a national of that land. This includes a median of 77% in Europe and majorities in Japan (70%), the U.S. (70%), Australia (69%) and Canada (59%).” So, go ahead and move to another country, but learn the darn language, I guess. Of course, with computers getting better and better at language translation, perhaps that will become a lesser issue in the future. 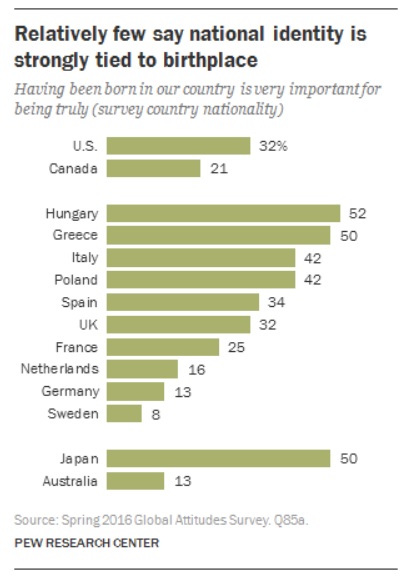