As you may have noticed, music is important to us and we make a point of getting to live shows when we can. You may also have picked up that we are big fans of New Orleans. So when the Hot 8 Brass Band out of the Crescent City comes to town, you know we’ll be there. They are the Rolling Stones of brass bands to the Rebirth Brass Band’s Beatles, combining funk, hip-hop, bounce and the call backs of the sanctified church with the long tradition of brass bands. One of our favorite shows we’ve ever been to was a Hot 8 second set in NOLA around 1 am in a venue not much larger than our living room. The slide of the trombone nearly hit us. Tuesday night’s show was fantastic too with the guys jamming in top form. With all that divides our world, music often brings us together–whether here in Seattle, down in New Orleans, over in Manchester, or even in Tehran. On the latter, we came across the video below of two Iranian buskers, a woman bassist and a man playing the guitar, covering Radiohead’s Creep. Check out the short video below and then tap your feet as we examine yet again how different Japan is, delve into whether we should worry about China following Japan’s economic path and then breathe in, but not too deeply, the latest data on air pollution. It’s this week’s International Need to Know busking for knowledge and information on the streets of our hustling, bustling world.

We love Japan. It has one of the most unique cultures in the world and we are a sucker for those who march to the beat of their own drum, even when it’s an entire nation. Of course, there are trade-offs in everything in life and Japan’s uniqueness can lead to challenges. For example, in Japan, CEOs are far older on average than in other countries. As you can see in the chart below, the average age of a Japanese CEO is 61 while globally it is 53. Further, only 33% of Japanese CEOs worked in another company at one point in their career while globally the figure is 74%. An article in the Nikkei Asian Review notes that “because many Japanese CEOs build their careers in a fairly culturally homogeneous environment, Japanese companies are at a big disadvantage when it comes to competing globally.” That cultural homogeneity makes our world much more heterogeneous, but like Japan’s lack of immigration and its other insular ways, homogeneity also has challenging effects for the country and economy. 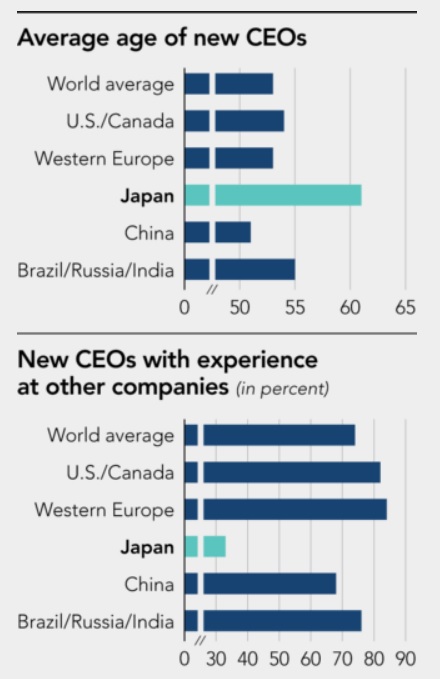 No we don’t think China’s CEOs will suddenly become old but people are making comparisons between the two countries’ economies. The Financial Times notes a number of eerie similarities between China’s economy and the pre-bubble, late-1980s Japanese economy, just before Japan’s long economic slog. But, the FT, which we esteem as much as the next person, misses two factors that typically, for the ever complicated China, point in various directions. First, is a demographic comparison. China, like Japan, like most of the world, has an aging population and most important has a shrinking working age population. The chart below by Charles Schwab, shows that under current projections China’s aging demographics are closely mirroring Japan’s. As we’ve noted before, economic growth goes up due to a larger working age population and due to productivity increases.* Unless trends change, China will face a future demographic headwind. However, China does not have the same closed society culture that Japan has so it’s possible it’s working age population could increase due to immigration (like America) or perhaps its birth rate will start going up again. Nonetheless, the graph below is worrisome. The other thing the FT article neglects to mention is that although Japan’s economy has been problematic, if one looks at GDP per capita, Japan does not look so bad. Of course, GDP overall is not growing and we shouldn’t expect it to expand with a shrinking population. But, the economy, when discussed in per capita terms, is not so bad. Whether China follows Japan’s path we do not know, but there are plenty of short-term worrying signs.

*China productivity, like the rest of the world’s, is way down in recent years. 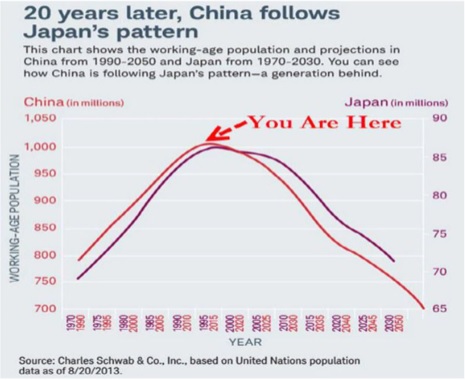 The Air Up Here

Depending on where you live, the air you’re breathing is full of particulates and other pollution. In recent years, Berkeley Earth began a major project to start tracking such pollution. In the map below you’ll see the worst areas in reds and purples (those colors sure seem to get a bad rep in graphics and metaphors while green just keeps skating on by–like much in life, our perceptions of colors are unfair). Berkeley Earth measures PM2.5 — particulate matter measuring 2.5 microns across or smaller–to determine where air pollution is problematical. Large parts of China, of course, look like Jake Lamotta’s face during a Raging Bull boxing match. But they are by no means alone. India is full of purple and red too. You’ll even see some yellow in parts of Europe and the United States. Berkeley Earth has not mapped Africa yet. Berkeley Earth has calculated “daily exposure to PM2.5 in terms of cigarette equivalents. Red is like smoking five cigarettes a day, purple brings you up to 10 and the brownish purple is the equivalent of Humphrey Bogart in a saloon in north Africa–15 or more Pall Malls a day. During a really bad day in Beijing one might as well inhale a pack of 25. But, as Berkeley notes, China is trying to address air pollution–and the incentive is not so much climate change but because of these localized air pollution health issues. There may be a lesson in here for addressing a variety of transnational issues resistant to solutions. 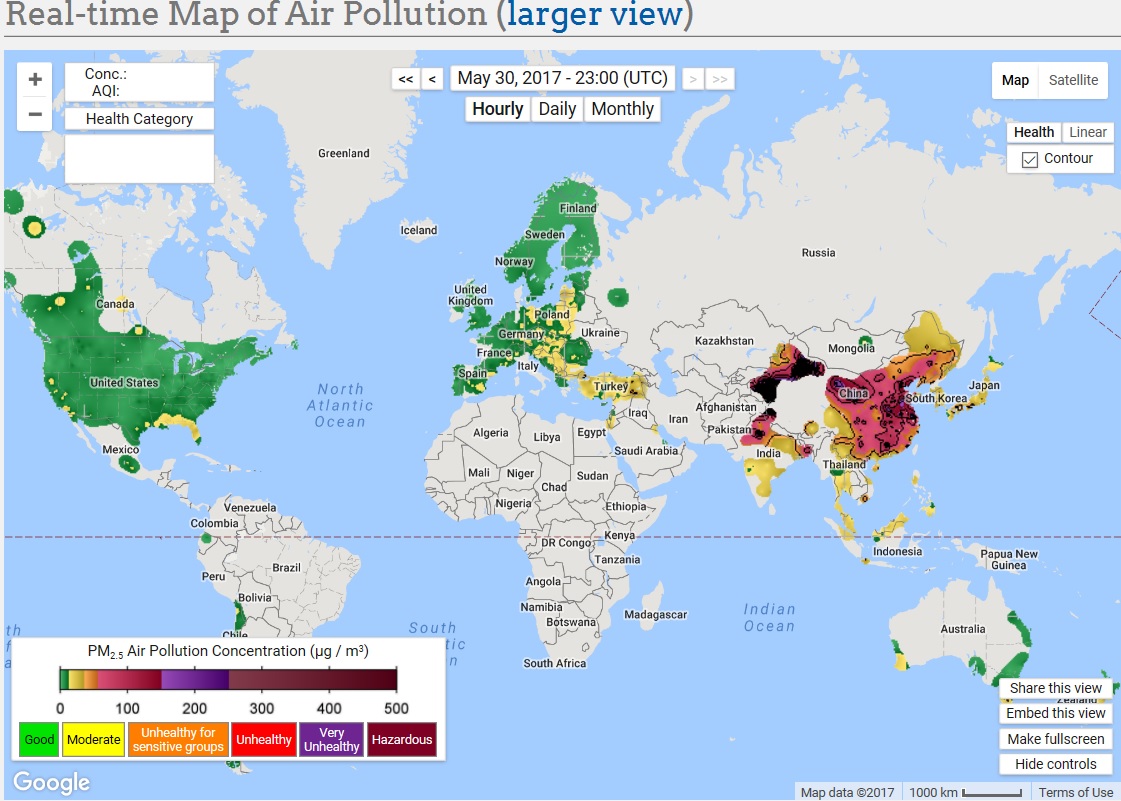 Unproductive World, Is China Smaller than we Think and Forest Bathing Germans Wore Grey, the End of Moore and the Spread of Intelligence
Scroll to top