New Orleans continues to be the greatest city in the world (and we’ve seen lots of world cities to compare it to) even though like most cities today the finely manicured claws of gentrification are rooting out some of the creative messiness that makes it great. Nearly every one of our Uber, Lyft and taxi drivers–many of whom are musicians, Mardi Gras Indians and other creative types–told us they now live outside the city (more evidence for our theory that suburbs are going to be more interesting than urban cores). But not even gentrification can completely destroy the glorious soul of the Crescent City. Only in New Orleans would we be able to enjoy an extraordinary concert experience on a random Tuesday night in November. After basking in the sounds of a young brass band busking on the street (the future is in good hands), we walked by a club and heard a band laying down a groove so deep and heavy George Clinton beamed happily on the Mothership. So we popped into the Blue Nile, not even paying a cover charge, and listened to Water Seed tear the house down. Until recently, the band members were Katrina refugees living in Atlanta, now they have returned triumphantly to New Orleans. As we advise you to check Water Seed out, we get down on the rise of the robots, boogie to brexiting the UK and try not to go into a funk about sexual violence data. It’s this week’s International Need to Know, the second line of international news and data. (Note: we’ll be making our world famous stuffing next week for Thanksgiving, back on November 30th)

Rise of the Robots

On our flight back from New Orleans we read a sobering article that claims in 40 years robots will take over all jobs. This led us to read with interest the 2017 Industrial Robots report from the International Federation of Robotics. It turns out that last year robotic sales reached a new peak with a 16% increase to nearly 300,000 units. The automotive industry continues to be the largest consumer of robotics followed by the electronics sector. Interestingly, the beverage industry is also seeing a large increase in the use of robotics. Unsurprisingly, given its role in final assembly, Asia is by far the largest purchaser of robots, with nearly four times more than either Europe or the Americas. And, of course, China accounted for nearly a third of all robot sales last year. The top five purchasers of robots are China, Korea, Japan, the U.S. and Germany. Mexico, starting from a relatively low base, is rapidly increasing its use of robots, which should be no surprise given its increased prominence in the automotive manufacturing industry (we need to re-negotiate NAFTA because all our jobs are going to Mexican robots, or, uh, something like that). According to the report, around the world there are now “74 industrial robots installed per 10,000 employees in the manufacturing industry.” South Korea has by far the highest concentration of robots with 631 industrial robots per 10,000 employees. We are a long way from robots doing all work but the report does note that one robotic trend is “smarter” robots, often connected to the cloud–as they become smarter, robots will indeed be able to do more of our jobs. But we must ask: when robots take over will a robot be the executive director of the International Federation of Robots? 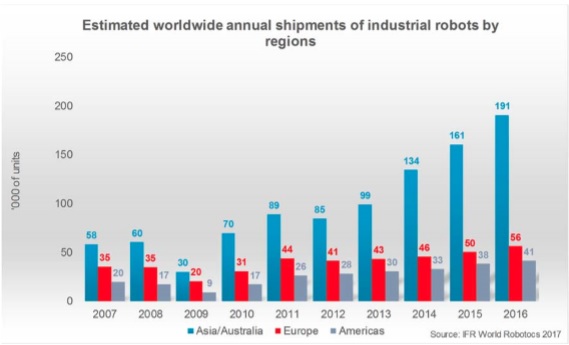 So what is happening to the UK as it continues to take a long, slow walk off a Brexit cliff? The economy has not cratered but there are many worrying signs as are evident from an economic survey by the Organization of Economic Cooperation and Development (OECD). The UK’s economy is growing but at a much lower rate than the EU’s or other developed economies, per the first chart below.  More ominous, labor productivity has stalled, as you see in the second chart. Net migration to the UK is falling which is apparently what Brexit boosters want but we always believe that people not wanting to come to your country is a bad sign of economic and political health. London, which by a large majority voted against Brexit, continues to spend on infrastructure, much of it from UK funds. But, as you see in the chart below, the parts of the UK which voted for Brexit, received more funds from the EU. And the British education system does not seem to be helping much with the UK doing poorly compared to the OECD average in a number of categories, including the number of students exiting school early. There are reasons for the discontent in much of the British population that led to the Brexit vote. Unfortunately, it is unclear how Brexit fixes those problems. In fact, it exacerbates them.

Given recent high profile news, it seems a good time to highlight the chart below detailing reported cases of violence against women around the world. Such data is, of course, incomplete, given that not all countries reported data to the United Nations (only 128 countries reported) and even in countries that did report, there may be underreporting. But of the countries that did report to the UN, Sweden, the UK, Botswana and Australia “had the highest reported rates of sexual violence.” The United States is especially high in rape. In addition to the basic human rights issues, gender inequality is a drag on economic growth. A McKinsey report calculated that improving gender equality would add $12 trillion to the global economy (see 2nd chart below). Me too is both a social and economic matter. 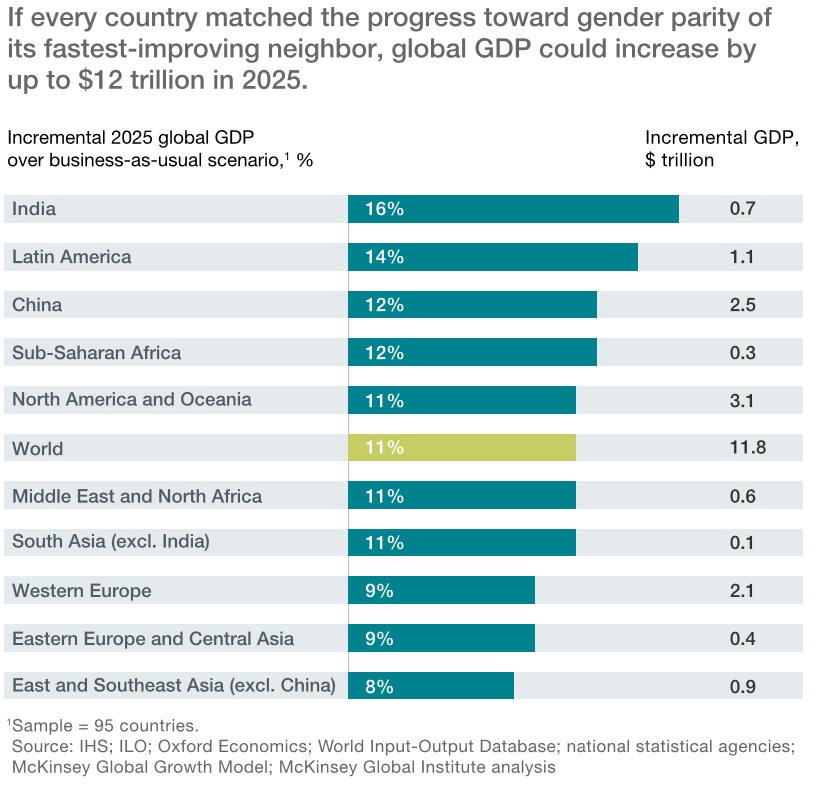