When I moved to Seattle from Washington, D.C. many years ago, I became friends with a guy who had recently moved to Seattle from Hollywood. Naturally we exchanged stories of our respective experiences in the industries of politics and entertainment. I had a thin magazine of salacious stories of bad behavior by elected officials and their staff. A bartender told me of a drunk Ted Kennedy’s boorish behavior in his bar, Chuck Schumer’s staff detailed his screaming fits and abusive language, and I knew one of the (many) women who Oregon Senator Bob Packwood harassed. Most of my stories, however, were of men and women working conscientiously for the public good. But my friend from Hollywood? He had Dickens sized volumes of tales of viciousness, brutish behavior and the general craziness of Hollywood executives and their enablers. These were stories of people treating other people in the most horrible ways. I came to the realization that the only industry more vicious and cut-throat than politics was Hollywood. This week, both appear to be in a desperate race to the groping bottom. But today we shift our eyes towards more important matters and analyze China from three perspectives: the world economy’s increasing reliance on it, its leadership grasping at a new way to conduct central planning, and its progress in artificial intelligence. It’s this week’s International Need to Know, the source of international information for men and women of all levels of IQ.

Last week we detailed positive economic growth in the global economy, with nearly every market currently seeing increases in their GDP. We also noted that what goes up will eventually go down and the risks of a synced world economy is there could be a simultaneous swan dive in our future. Which brings us to the increasingly prominent role China plays in the global economy. Shaghil Ahmed of the Federal Reserve Board recently detailed China’s growing importance, its opportunities, its risks, and what would happen to other economies if China runs into economic trouble. In regards to the last point, Ahmed notes that “if China went into a crisis, which admittedly is a tail risk, the effects around the globe would be substantial…aggregate emerging economies would drop 4 percent below the baseline, roughly equivalent to what transpired in the Mexican 1994-95 crisis.” Advanced economies would suffer too, with Ahmed estimating a 3 percent decrease in GDP growth. Even the U.S. would see growth reduced to 1 percent in Ahmed’s models. Ahmed’s is a fascinating, if complicated paper, and I urge you all to check it out. Ahmed does not expect a China economic crisis but the world’s increasingly intricate ties to the Chinese economy are why people worry over Chinese debt levels, liquidity and other economic challenges. Which brings us to our next story: China’s central command fetish. 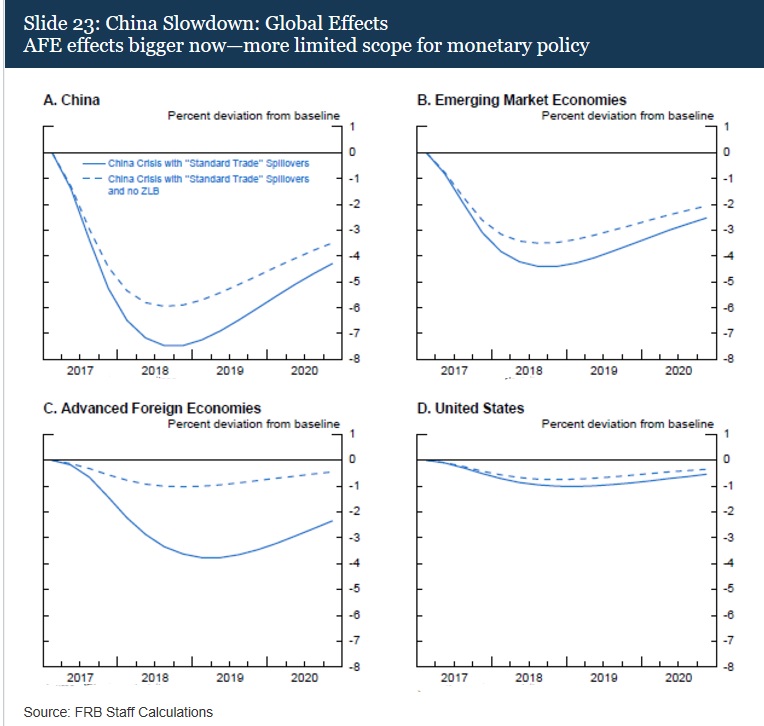 A problem for those advocating for an economic system based on communism or socialism is the real world results of the past 100 years.These economic systems have repeatedly failed throughout history. But China, according to Sebastian Hellmann of the Mercator Institute for China Studies, believes successful central planning is now possible due to technology and big data. With the advent of more powerful computers and new artificial intelligence methods, Hellmann asserts that “With the help of Big Data, China’s leadership strives to eliminate the flaws of Communist systems. In the former Soviet bloc, administrative planning created a shortage economy due to a lack of price signals and reliable feedback on supply and demand. Today, a growing number of Chinese economists and technology experts believe that Big Data will fix these deficiencies of national economic co-ordination.” President Xi’s team terms this new technological central command “top-level design.” We are tempted to conjure up Hemingway’s words, “Isn’t it pretty to think so?” but it is worth wondering what AI and big data will allow in the future. Perhaps technology will allow central planning of an economy to be more efficient than markets–we doubt it but as significant progress is made in AI, our lives will change in all sorts of ways, and maybe this will be one of them. Also, China is pretty successful already with, while not a central command economy, not exactly one based on western liberal economic philosophies either. As the economist Tyler Cowen recently noted, “For the first time in my lifetime, America finally has a peer country… in terms of human talent, GDP, China right now is in most ways a peer country to the United States.” Which leads us to this week’s last story on China.

Ranking the HALs of the World

There has indeed been lots of progress in artificial intelligence in recent years with promise of more to come. For China to achieve its digital central planning dreams, their AI capabilities will need to become better yet. Interestingly three AI researchers from the Chinese Academy of Sciences (one of them is also associated with the University of Nebraska of all places) recently published a paper to evaluate where AI currently stands with human intelligence. They conducted this research to assess the risk of AI to humanity but the rankings are interesting regardless of that angle. In 2014, they developed a “standard intelligence model” that claims to allow the researchers to test IQ levels of both machine and humans in a standard way. In their rankings (see table below), machines still lag far behind humans. But three of the top four ranked machines are all Chinese based, followed by three in America (all mighty, all knowing, all invasive Google ranks first, though still behind a six-year-old). We’ve discussed China’s intense efforts in AI before. Regardless of whether AI progress allows them to accomplish central planning and/or leap to high income status, it is likely to have a large impact on China and the world one way or another.