This week, we had the honor and pleasure of having lunch with two retired businessmen who once worked for what was then a prominent Seattle company. They both did business with China while Mao still lived. They were pioneers. Since it was a personal lunch, we won’t tell their stories but we’ll tell one of our own that did not make it into our book, Challenging China, and which we have been thinking about since the Gates split up. We helped organize the gala dinner for the visit of Xi Jinping when he visited Seattle in 2016. One of our responsibilities was figuring out who sat where at the head table which was full of dignitaries and CEOs representing companies who sponsored the dinner at a certain dollar level.

One afternoon a staff person for Bill Gates called me up and said he assumed I knew that Bill Gates was attending the dinner and the Chinese wanted him at the head table. I did not know this. The Gates Foundation was not a sponsor. I got off the phone and told the chairs of the host committee that I wasn’t planning on telling Bill Gates, then the richest person in the world, he couldn’t sit at the head table but did they want to? They did not. The next day I received another call, from another person at the Gates Foundation, who told me they assumed I knew that Melinda Gates was coming to the gala dinner and that the Chinese wanted her sitting at the head table. I told this person, as a matter of fact, Bill and Melinda didn’t usually consult with me on their dinner plans but I would get back to them.

I went back to the chairs of the host committee and said no other spouses were allowed to be at the head table* but this was after all the Bill AND Melinda Gates Foundation so I wasn’t sure which one was the principal and which was the spouse. We all agreed both Bill and Melinda would sit at the head table. This caused some consternation with the logistics people as it was already quite a large table and there was only so much room in the hall. But we worked it out. Unfortunately, or perhaps fortunately, Bill and Melinda didn’t work it out (was this an early indicator they were going their own way?) and now Melinda has bought a house not too far from ours. While we wait for her assistant to call and inform us that Melinda is on her way over for dinner, we provide you the most innovative companies in the world, Canada helping human rights activists and whether China’s military is competent or not. It’s this week’s International Need to Know, an Olympian of international news and data.

*We can tell another story of spouses and requests to be at the head table but that must wait ‘til later, perhaps after many drinks

Our first work trip in a year and a half is next week. INTN will return on Thursday, August 12th.

We see rankings regarding innovation all the time but always wonder about their accuracy. Defining “innovation” itself is difficult so just think how hard it is to rank companies by how innovative they are. The rankings will mainly be based on how the ranker defines what is innovative. But Boson Consulting Group takes a crack at it in its annual Most Innovative Companies Rankings.* For all the concern about America’s decline that we read and see, American companies continue to dominate BCG’s list of the top 50 most innovative companies. Of the top ten, seven are American companies, including the top five (although Tesla is increasingly reliant on China for its market—20 percent of its sales, but will that continue as China increasingly turns inwards?). The non-American top ten innovative companies hail from Korea (Samsung), China (Huawei) and Japan (Sony). A German company, Siemens, claims the 11th spot. Of the top 50 on the list, 27 are American companies, with China and Germany tying for second at five companies. Will China’s crackdown on consumer tech decrease the number of companies on this list in the future or increase it? By sector, 32 percent of the companies on the top 50 list are technology, 32 percent consumer goods, 20 percent health care and 12 percent transportation and energy (in the interest of climate change let’s hope this percentage increases). 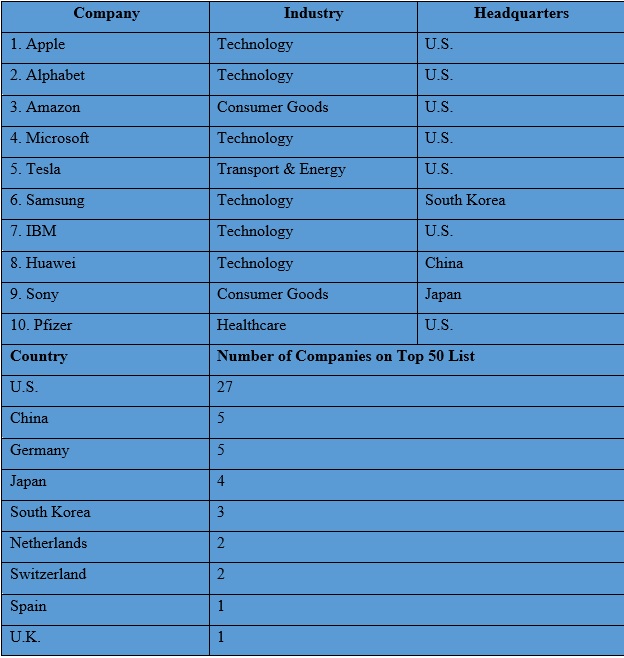 *BCG created their rankings by surveying 1600 global innovators (who makes the list is a decision of definition).

China Corner:  How the CCP Keeps the Military Loyal

It’s hard to hire good help…especially when you value loyalty over competence. This turns out to be especially difficult for authoritarian governments when constructing their militaries according to new research by Dan Mattingly, a political science professor at Yale. He studied how the Chinese Communist Party (CCP) ensures the military remains loyal to the party and hopes to have an effective fighting force. He gathered data on 10,000 appointments to the People’s Liberation Army of China, from Deng Xiaoping’s time to the current Xi Jinping era, and took a fine-toothed comb to the data to “trace career connections between individual officers and civilian leaders of the CCP.” He found that “senior-rank PLA generals with career ties to CCP leaders are about 40 percent less likely to have gone to college than their peers. Yet with a prior career tie to a top CCP leader are also more than 2.5 times more likely to be promoted to full general.” He also observes that during times of domestic turmoil, connections to party leaders rises and competence—based on military experience and education levels—falls. In other words, CCP leaders pack the military with loyalists when they’re most worried about the loyalty of the people. Such occurrences happened during the 1989 protest movement that led to the Tiananmen Square massacre and during the Bo Xilai incident in 2012 (read Challenging China for more about the latter). If our book is correct that China is facing a more challenging economic era due to demographics and other factors, than its military is likely to be less competent in the coming years as well. 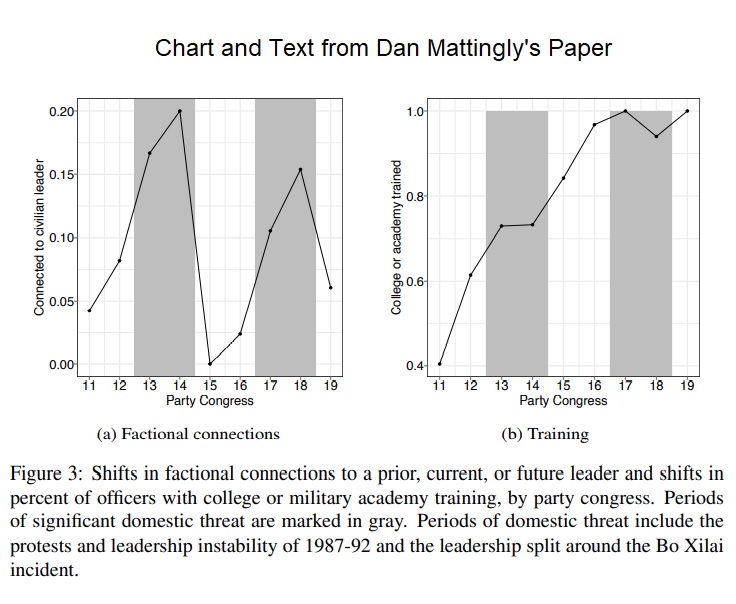