What People Value, Panama! and A Competition of Competence

What People Value, Panama! and A Competition of Competence

Some of you may remember that in our later days we hope to live in New Orleans in the winter; a musically, culturally, epicurean light to the dark rain of Seattle. So perhaps we should understand the cluster flies who have decided to winter in our attic. The term “wintering in your attic” was used by the owner of the pest control company we hired to rid ourselves of the flying pests, as he explained that we were doomed. Cluster flies, it turns out, seek refuge in the cold months, usually in a tree, but sometimes they stumble on a place as hospitable as an attic, where they settle into hibernation. But the warmth and light of the rooms beneath them confuse the flies into thinking it is spring, and so randomly they wake up and fly into the household.

Poison them, we assumed would be the solution. But the company owner patiently explained that because of our blow-in insulation, it would be impossible to remove the dead flies after killing them and further that their remains would then attract a certain species of beetle* who would swarm into the attic to eat the carcasses and from there take over the rest of the house. The beetles, he explained, were a far worse foe than the flies. He cheerfully told us the flies would leave with the spring sometime in April or May (being a math major we quickly calculated that was nearly half a year they would be squatting like unwelcome Airbnb guests). He suggested in the meantime there was nothing to be done but for us to hang a light in the attic above a box, to which the flies will be attracted when they accidently waken from hibernation, hover by its brightness and then expire, falling into the box. Said receptacle we must empty every few days in hopes that the 2000 or so flies (a number at which if we had any breath left in us would have elicited a gasp) would be removed by this crude, time-consuming method.

We should probably mention that accessing our attic requires placing a ladder in the small closet that has the narrow accessway in the ceiling and pushing ourselves up into the fly room using our shoulder that we are currently getting physical therapy for from an old injury. So, as you lament whatever worries may shadow your days and nights, we hope you will take a moment to think of a solution for ours. In the meantime, we examine condos immediately available in New Orleans while we examine what countries value, Panama’s success and China’s futile democracy fight. It’s this week’s International Need to Know,  a spider web of information and data to a world full of flies.

*We don’t remember the species name, at this point too traumatized by our diptera predicament, to concentrate on his every word.

I’ll be home for Christmas goes the popular carol (and one of the saddest songs ever written when you know the context and listen to the lyrics) and it ring-a-lings true because Americans, and people around the world, value their family most. This is illustrated by Visual Capitalist which took data from the World Values Survey and determined a) what countries value the most and b) which countries have the most similar values. Respondents of the survey were asked which aspects of their lives are most important: a) family, b) friends, c) leisure time, d) politics, e) work and f) religion. Visual Capitalist tells us that for the 94 countries surveyed, all valued family most except for Indonesia, whose population considers religion most important. “After family, work was the most valued, with 46 different countries identifying it as their second-highest priority. Friends came next, followed by religion, and then lastly, leisure.” Apparently nobody valued politics. Visual Capitalist took this data to determine which countries are similar in terms of these values. The U.S. is most similar to South Korea, Singapore and the U.K. Perhaps there’s a reason BTS and Squid Game are so popular here. 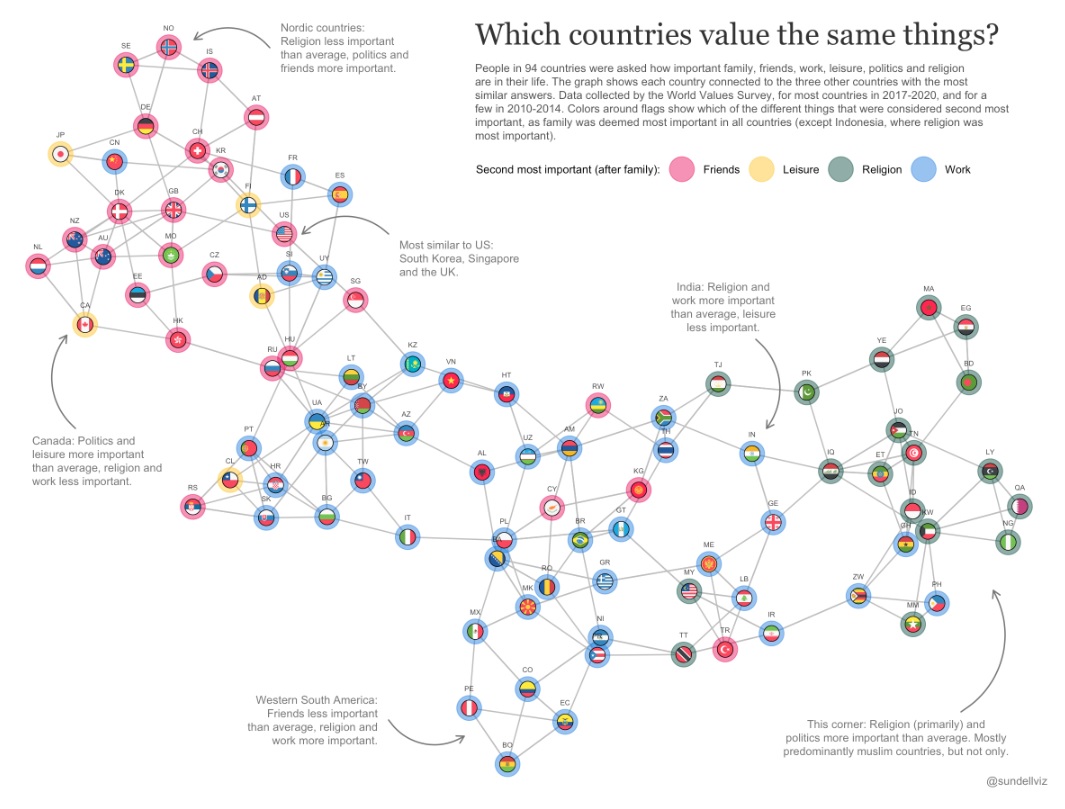 We regret not having spent more time in Panama, both in this space and in the country. We’ve only been there once and saw the Panama Canal up-close as part of a study delegation from Seattle that included officials from the Puget Sound area ports. The canal and the country were both impressive in our brief time there. The country continues to impress as the IMF details in a recent blog post about convergence, the idea of developing countries catching up to the U.S. economy, at least in terms of GDP per capita. As you can see in the graph below, Panama is a star in Latin America in closing the GDP per capita gap with the United States. We also note that our most underrated country of Chile is doing relatively well too. Panama’s 2020 GDP per capita was $12,373. The IMF projects Panama will continue to grow at 5 percent per year and “at this pace, Panama could catch up with the U.S. by 2056.” Projections 34 years into the future are about as worthwhile as our annual Seattle Mariners predictions (they’re going to the World Series next year—if there’s a season, and there may not be because of labor strife). Much of Panama’s success is due to the Panama Canal. Will the Canal still be as important in ten years? Twenty? Regardless, we plan on keeping a closer eye on Panama going forward. 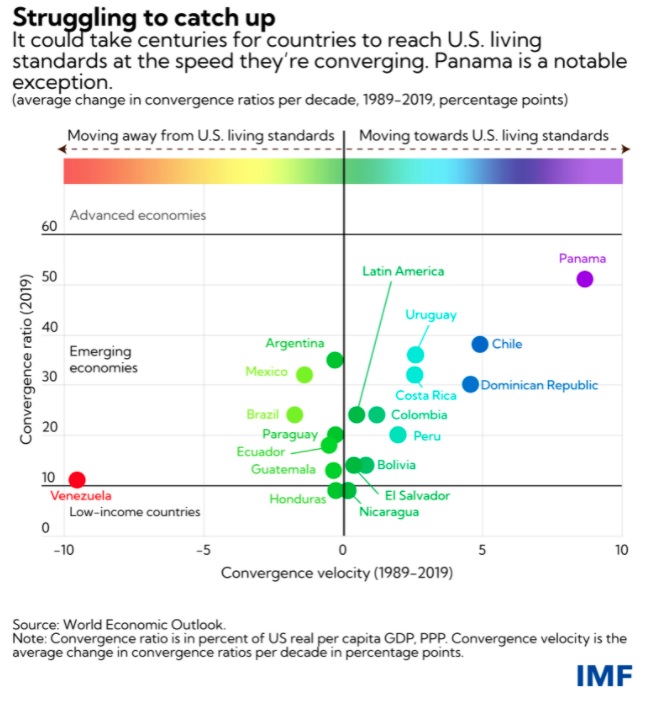 China Corner:  A Competition of Competence

The U.S. – China competition we hear so many talking about (we define it as a Competition of Competence) manifested itself in important, surreal and silly ways this week. Before the U.S. could announce a political boycott of the Olympics, China said U.S. politicians weren’t invited (how do you translate “nyah nyah nyah” into Mandarin?). Biden is hosting a Summit of Democracy this week so China quickly organized their own “Democracy Forum,” where one presumes participants will discuss a bizarro Bill of Rights prohibiting free speech, requiring the imprisonment of religious minorities and the silencing of any news about sexual assaults of famous tennis players. Actually, in preparing for the forum, China released a white paper on “The State of Democracy in the United States.” There is much in the document that those on the far right in the U.S. and on the far left will look sympathetically upon. The document even highlights some real flaws in American democracy. As clever as China’s leaders and propogandists may think they are in this and other documents they have prepared in retaliation for the Summit of Democracy, it proves the usefulness of such measures by the current administration. Democracy and human rights are the most treacherous terrain for China to compete on in the Competition of Competence, since, of course, China competes very badly indeed in these areas. Which gives us all the more reason for concern about real risk to American democracy.  It’s all part of the Competition of Competence. 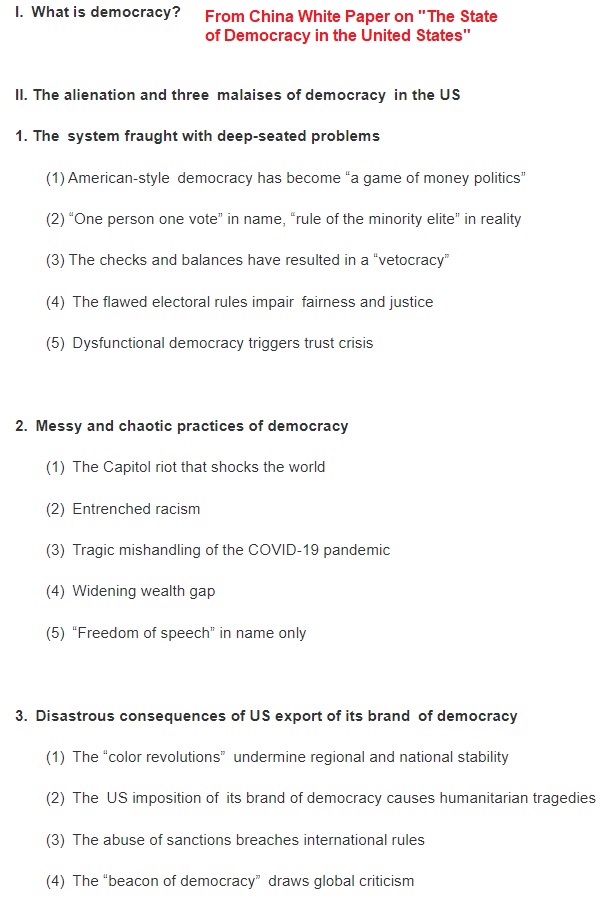