Most Important Stories of 2021: Historical Resolution, Covid and What Will Increase Globalization

We sat at the pub in Dublin knocking down a pint of Guinness as he told us how he became an Irish musician. He and his mates some twenty years earlier, when they were but teenagers, were about to busk on the sidewalk for the first time. They had practiced various pop and rock songs and were about to get started but first entered the pub behind them to fortify their courage with a beer. As they drank, guitars at their side, some traditional Irish musicians were setting up and asked them if they wanted to join in. Our interlocutor at that time looked down on traditional Irish music as old fashioned and corny. But these musicians were convincing and he sat in with them learning the tunes as they played in the pub. He never ended up busking on the sidewalk that night. In fact, he spent the next twenty years learning and playing the traditional stuff and teaching people like me and my wife about it. It was a magical night in Dublin as he took us off the beaten musical and drinking path to pubs where the traditional stuff was played. Throughout the night, he regaled us with stories, including about Bono, The Edge and lesser-known musicians he was friends with. We were charmed, entertained and educated and didn’t get back to our hotel until three or four in the morning. This is perhaps a roundabout way to wish you a happy holidays with one of our three favorite Christmas songs (and the most popular one in the U.K.), a Fairytale of New York, played by an Anglo-Irish, Celtic punk band, The Pogues. They didn’t stay in the traditional pub.

Given it’s the end of the year, which naturally compels reflection, we are going to detour from our usual format to highlight the three most important developments of the past 12 months, the ones which are most important for the coming twelve: China’s historical resolution, how China and the U.S. did and did not deal with the pandemic, and the return of globalization. It’s a year-end International Need to Know, tossing international information and data from a sleigh on the roof.

We will be busy preparing to ring in the new year next week. We’re back in 2022 on Thursday, January 6 when we hope to announce a cool new feature.

At the Sixth Plenary Session last month in Beijing—a gathering of China’s top leaders—a historical resolution was introduced. Its official title is: “Resolution of the CPC Central Committee on the Major Achievements and Historical Experience of the Party over the Past Century.” Catchy, huh? Rolls off the tongue like an ideological earworm. But experts analyzed this document like Talmudic scholars or Kanye West Ye fans obsessing over the meaning of his lyrics. These analysts mostly agreed that the historic resolution more or less maintained Mao’s status (though the Cultural Revolution came in for some ribbing), diminished Deng Xiaoping and elevated our current aspiring great leader, Xi Jinping, to great heights in the Chinese leader pantheon. This latter phenomenon, of course, is the important aspect of the historic resolution. Xi is referred to as the “Helmsman” in the document and he’s given credit for the “glorious new era” China is in. “Xi Jinping Thought”—the ideological equivalent of an Eagles greatest hits album—is referred to repeatedly in the resolution. This elevation of Xi is part of an ongoing branding effort for next year’s 20th Congress Meetings when Xi will go for a third term. In other words, the more aggressive China—in terms of oppressiveness at home and changing the world order abroad—is not going away next year. You’re going to need to re-read Challenging China to be prepared. 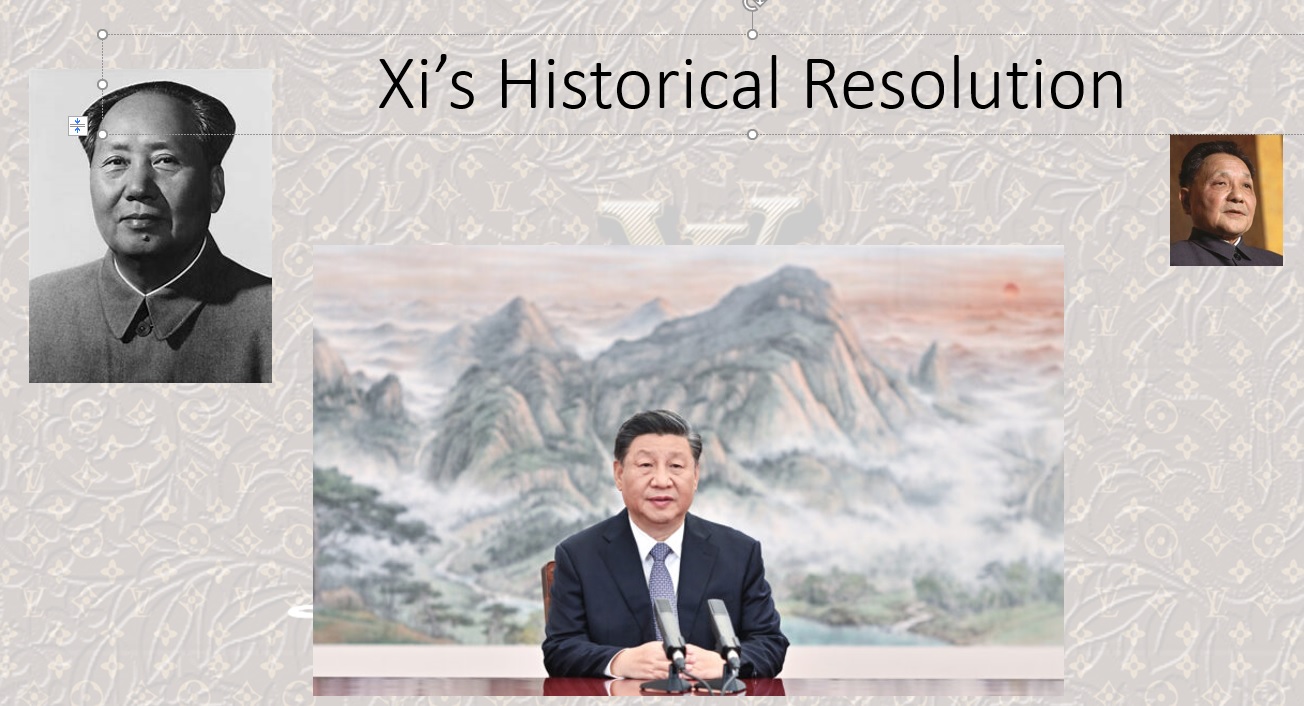 China has so far successfully instituted a “Zero Tolerance” Covid-19 policy. Through extensive and rapid testing, extreme lockdowns and other measures, China, has managed to contain the virus as well or better than any other country. We say successful but these measures have come at a cost to its economy, which continues to have lower domestic demand and is growing more slowly than, for example, the U.S. economy. And, now the question is whether their tough measures are a match for the much more infectious Omicron variant. If not, China could be in for some big challenges in 2022. As part of the country’s continued decoupling from the world, China has eschewed other countries’ vaccines, only using homegrown ones  Unfortunately, those vaccines which are less effective against all variants, appear to be completely ineffective against Omicron. With ineffective vaccines and little natural immunity from previous infections, what will happen to China in the pandemic going forward? On the other side of the spectrum is the United States, which essentially has no pandemic policy at all. Two years into the pandemic and we still don’t have easy access to rapid testing and Biden’s proposal to make 500 million tests available in January is late and still about four times too few tests. Read Eric Topol’s latest post for a good summary of the failures of the Biden administration on the pandemic. Where the U.S. has succeeded is in technological advances. This week the FDA approved an effective treatment of Covid-19 which will be a complete game changer and could effectively end the pandemic. But, as Topol points out in his piece, there are no plans to scale up production which essentially makes the treatment a nonfactor. Also this week, came news that Walter Reed Hospital has developed a pan-coronavirus vaccine that will soon begin second-stage human trials. It will work against all variants, including Omicron, and against all coronaviruses (including those that cause the common cold). This also is a game changer. But, again, do we have the willpower to spend the money to scale up production of this vaccine to protect the world? The next twelve months will very much be affected by the last twelve months, including the last week. 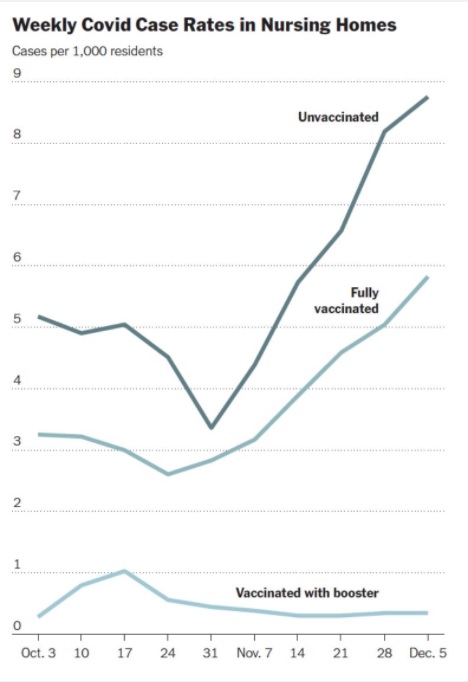 If you’re like us, even now two years into the pandemic, you are still conducting lots of meetings remotely using Zoom, Microsoft Teams and other such technology. Many have wondered how much this will become a routine part of working in the future, regardless of pandemics. We are starting to get some data indicating hybrid work is here to stay. This will likely have profound implications for the work world and global economies. The economist Nick Bloom in an interview in The Financial Times notes that overall productivity increases when working from home. Specifically he asserts, “The average numbers we’re seeing for [gains to productivity from] hybrid will be about 3-5 per cent but there’s a big spread.” About a quarter of workers are less productive working from home, but the rest of workers are more productive. Hybrid work is here to stay, which is going to transform companies, office space, and, yes, globalization. Why the latter? Well, as Bloom points out, companies are always striving for more productivity and efficiency, “I think there’s going to be a huge surge in offshoring and outsourcing once the pandemic ends and firms readjust. It won’t happen within six months, maybe not within a year, but within five years we’re going to see a point of inflection. I think it’s going to really benefit countries that are in the same time zone of wealthy European and North American countries.” Such offshoring in the past has negatively affected a subset of workers in the U.S. and other high income nations. Prepare for much more economic disruption in the coming years as globalization, which so many people think is dead and buried, continues to change the world, for good, bad and indifferent. 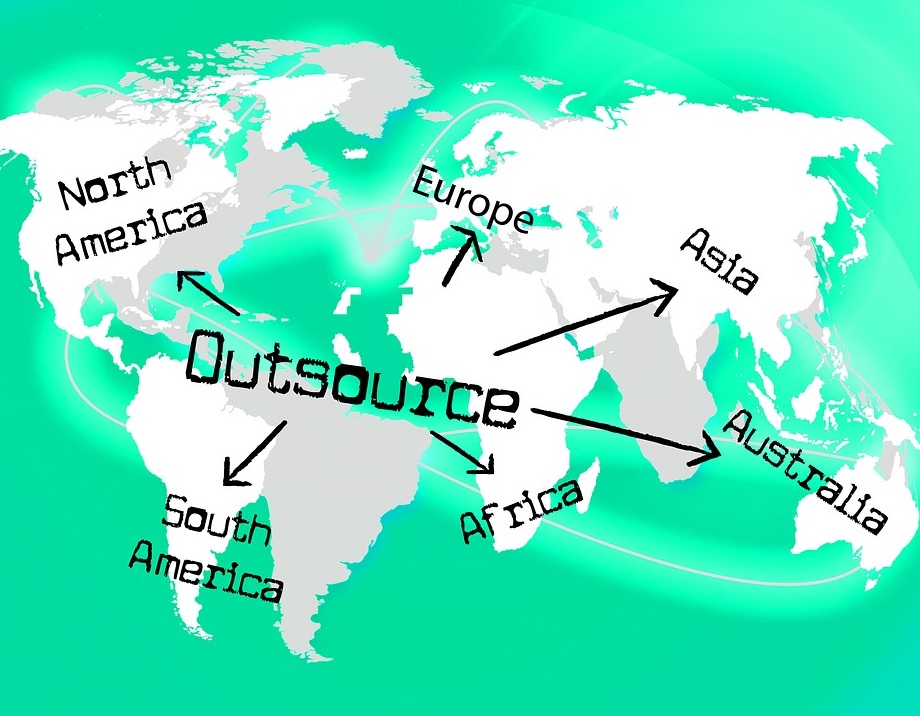