Perhaps nothing is missing more from public life, in our discourse, on social media, in policy discussions, debates, arguments, writings and verbal jousts, than humbleness. Name the issue or the movement, and they could all use a bit more of it. People are more convinced than they should be that they are correct in their opinions. This despite life continuing to prove otherwise nearly every single day. We ourselves here at INTN are in need of more humblesness as much as anyone. For instance, we once asserted very confidently to anyone who would listen that Jim Converse would win the Cy Young Award before his career was over. Who, you may ask? Exactly. And yet even we continue to make statements like we know what is going on. And policy makers, reporters, politicians and others appear to be even more confident than we are. So we remind all of us, as we once wrote in this space over two years ago, that the three most underused and yet most accurate words in the world are, “I don’t know.” But we are sure we will describe the sweet and sour mysteries of China, question the definition of “is”, and search for the missing European unicorns. It’s this week’s International Need to Know, the world’s most humble analysis of, well, the world.

Sweet and Sour Mysteries of China

China’s reemergence as a global power brings with it a more assertive role on the world stage and resistance to these moves, all enveloped in the continuing mystery that is the world’s largest country. Forthwith we bring to your attention the The Strange Case of the Stolen Chinese Art and the Mysterious Unmasking of Chinese Hackers. First we point you to a fascinating article in GQ of all places about Chinese art heisted from museums around the world. The article’s author suspects the Chinese government is behind the thefts in an attempt to retrieve art the western world took from China during its down years: “In each case, the robbers focused their efforts on art and antiquities from China, especially items that had been looted by foreign armies. Many of these objects are well documented and publicly known, making them very hard to sell and difficult to display. In most cases the pieces have not been recovered; they seem to simply vanish.” Paging the Chinese equivalents of George Clooney and Sandra Bullock. Second, the online tech publication Motherboard describes a mysterious group revealing the names of Chinese hackers: “Since April last year, a group calling itself ‘Intrusion Truth’ has trickled out the real names of hackers working for Chinese intelligence. Recently the group has ramped up its efforts against a Chinese operation targeting governments and businesses.” In recent years, Russia has received the lion’s (bear’s?) share of attention for cyber shenanigans, but China also has a robust cyber espionage machine, especially and including industrial cyber espionage. Now somebody is fighting back, in the form of Intrusion Truth. The golden BRIC road to the Chinese Century will be littered with such stories, mysteries and wizards. Enjoy them. 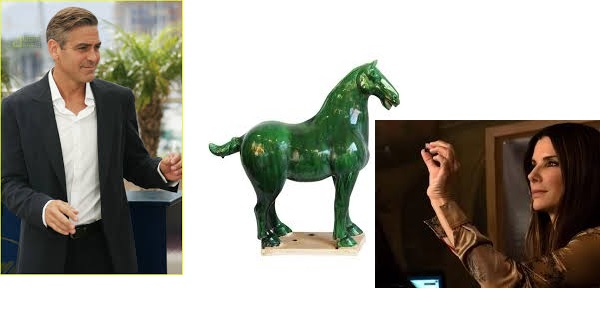 It Depends on What the Meaning of “is” is

There has been much talk of socialism in recent months with U.S. congressional candidates proudly claiming the moniker and others attacking them vociferously for doing so. Of course, much of this is due to a confusion of terms. Most of the candidates are not arguing for nationalizing companies but rather to adopt “social democracy” along the lines of a variety of northern European countries. And this is where we enter INTN territory. Many on the right decry these northern European countries as un-free. And yet, as Will Wilkerson points out, the Heritage Foundation’s Economic Freedom Index ranks most of these countries ahead of the United States. Denmark, Sweden and Iceland are all more economically free, according to Heritage—a conservative organization, whatever that means in this day and age—than the United States. As Wilkerson notes, they “outscore the United States in the security of property rights, ease of starting a business, openness to trade, and monetary freedom (a measure of inflation and price controls).” So which countries are “socialist” and which are “capitalist” and which are more free or less? In our estimation, 37 percent of policy misunderstandings are due to inaccurate use of labels. 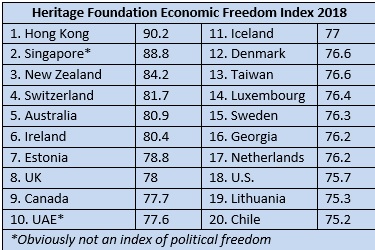 We are not a fan of the term “unicorn.” We strive to excise it wherever we find it, whether in sports, business or even Harry Potter books. But it is interesting that the EU continues to lag far behind the U.S. and China in the number of companies valued at $1 billion or more. In 2017, the U.S. had 109 such companies, China was home to 59 and Europe only 26. And Europe lags behind in companies valued at $100 million or more as well. Why? A Bloomberg article notes that the EU is still a compilation of nation-states rather than a unified whole. One grows a company in Germany but it is still difficult to expand it into France, Italy and Poland. Whereas a Chinese or U.S. company starts with a large market to begin with, no matter which province or state where it is headquartered*, and then can expand overseas. In addition, EU companies still receive less venture capital, “Last year, 3,500 European companies received a combined $19 billion in venture investment. Although that pales next to China’s $40 billion and America’s $67 billion, it’s a record for Europe and four times greater than the figure from five years ago.”  Whatever the reasons (and, of course, it is plural–don’t be seduced by the tyranny of narrative**–there are almost always multiple factors for something, not one overarching narrative), these reasons are why China and the U.S. (and perhaps some day, India) will be the drivers of global business whatever their own challenges.***

**We hope one day to write a book about The Tyranny of Narrative, we hope you will buy it when we do 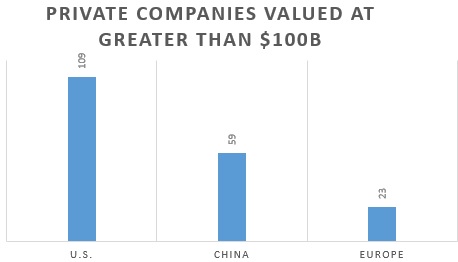