As we savor the banana pudding we ate at Roux restaurant on Valentine’s Day, rue that we are not joining pitchers and catchers this year, and mourn the passing of both a supreme court justice and the last vestiges of civility in political campaigns, we examine the list of countries with negative interest rates, ponder the world’s fifth-most important graph and wonder at the relationship between Taylor Swift and the Japanese stock market. Yes, even at the risk of being the target of a crazy Kayne West tweet, it is this week’s International Need to Know, your loving guide to matters of the world that count.

Why Are You So Negative?

Some think Canada, Norway, Israel and even the UK may soon join in the fun. The fantastically named Robin Wigglesworth, an editor at The Financial Times, tweets “that eurozone banks are down 41% since ECB introduced negative interest rates…and Japanese bank stocks have done worse this year than in the 6 weeks following Lehman collapse.” So the question is will the negative interest rate policies work? If more countries join the parade will it have an effect on those already using negative interest rates? Does it signal we have entered a new economic era? These are some of the most important economic questions we can ask. And, we don’t have the answers. Sorry!  But we hazard a guess that even those who think they know the answers should listen to Noah Cross from the movie, Chinatown—“You may think you know what you’re dealing with, but, believe me, you don’t.”

The World’s 5th Most Important Graph

What are the top four?  Oh I’m sure we’ll cover them at one point or another here at INTN, but for now let’s concentrate on number 5. Below you see that the working age population for much of the world is either flat, decreasing or increasing at a much slower rate than previously. That makes achieving a fast growing economy more difficult and has implications for countries who want to export. There are less of the people who do the most buying and producing.  GDP growth is built on such people.  There are two big exceptions to this demographic trend: sub-Saharan Africa and India. It will be interesting to see if they can propel world economic growth or whether their other challenges will hamstring their economies despite a growing working age population. 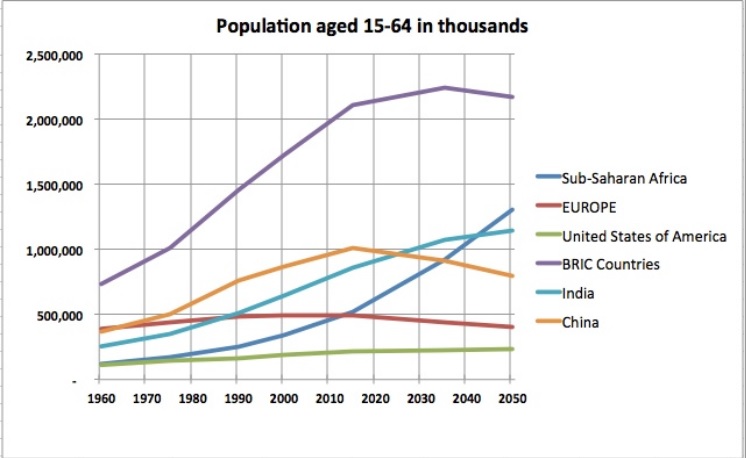 Planning your investments? Here’s a not so fun factoid. On December 1, 1989, the Nikkei closed at 38,916. Twelve days later, Taylor Swift was born and the Nikkei has never come close to those heights since. In fact, nearly thirty years later, even after large increases since 2012, the Nikkei is at 16,022, still less than half what it topped out at. Unlike Kanye, we don’t blame Taylor Swift for the Nikkei’s inability to fully recover. We do remember, however, that the experts say invest for the long-term. It’s been a long time.  With Japanese exports decreasing at the largest rate since the financial crisis (more evidence of a slowdown in the Chinese economy) and Japan’s population decreasing (5th most important graph!), it will be longer still.

Iran’s Opening, China’s Consuming and Safe Mexico Oil, China’s Innovations and the Most Popular Person in the World
Scroll to top