International Need to Know ditched the winter blues to see the funk, hip-hop, neo-jazz New Orleans band, Galactic, at a local club and discovered in the opening band, Con Brio, a rising star full of youthful rhythm and blues vigor (the lead singer is known to do an occasional backflip when performing). But even a musical Ferdinand Magellan moment did not distract us from answering last week’s question about China, raising new worrisome ones, revealing who is number one at the box office, and providing Donald Trump’s least favorite statistic. So even though Chris Christie is unlikely to endorse us, it is this week’s International Need to Know, where we bust some international economic moves, Con Brio-style, on the world stage.

The Yang: Why China has Become Innovative

As we learned last week, despite difficulties, lots of good things are happening in China, including companies innovating, not just copying. But how did this happen? We promised we would tell you why they’ve become an innovative economy and unlike presidential candidates we here at INTN always fulfill our promises. The answer, of course, is scale. Yes, China is big and that matters.  For example, China has as many 4G phone users as the entire U.S. population. There are more than 500 million mobile internet users in China. These mobile users are young with the average age 15 years younger than the average U.S. user. To service this enormous, young user base, Chinese companies have to innovate. Yes, Chinese companies have been protected from foreign competition but despite that, the sheer scale of the market has forced them to innovate.  A population of 1.3 million, a middle class of 150 million – 260 million (depending on whose counting), compels companies to meet market demands with new innovations. You gotta give the people what they want. Here’s your bonus how-large-is-China statistic: for the first time ever, China’s monthly box office receipts were larger than North America’s thanks to the smash hit, The Mermaid. Regrettably, this is unlikely to spur innovation in Hollywood.

The Yin: China’s Economy is slowing

New underlying economic data raises fears that China’s economy is growing at a much slower pace than the official 6.9% GDP growth rate. China’s purchasing managers index for manufacturing dropped to 49 in February. Anything below 50 indicates contraction. In fact, this is the lowest level since January 2009, which was smack dab in the middle of the world financial crisis. It’s not just manufacturing. The services PMI has also slowed to 52.7 from 53.5 in January.  This is still above 50 but is nonetheless at its lowest level since December 2008. Another sign that jobs are not as plentiful as they were before, at least not in the developed cities, is that for the first time in 30 years the migrant population has decreased, by 5.7 million in 2015. We’ve noted before that imports are down and beer sales too. Given the preponderance of the evidence, it is very difficult to believe that the economy is growing 6.9%. The question remains of whether this is a normal business cycle recession? Despite opinions to the contrary in recent years that China is invulnerable to business cycles, China is not the Golden State Warriors and President Xi is not Stephan Curry, China is going to lose every once in a while. Or, is there something deeper afoot? We’re scared to end up like Alice but soon INTN may dive into the China banking system rabbit hole to find out what is really happening.

We teased you a few weeks back when talking about the relative lack of crime in most of Mexico that we would come back with more on their underrated economy. And we will, but for now, in honor of a certain presidential candidate frontrunner, we leave you with this chart on net migration between Mexico and the United States. Go ahead and peek, there has been zero net migration from Mexico since 2008. In fact it’s slightly in the other direction. Maybe Mexico willpay for that wall to be built to keep us out of their country? 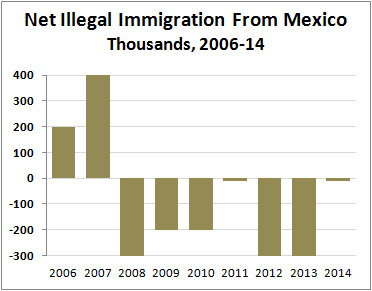 Oil, China’s Innovations and the Most Popular Person in the World Underrated Mexico, Rise of Chinese Robots and Man Vs. Machine II
Scroll to top