We averted our eyes this week from the solar eclipse, presidential debates and the latest episode of The People Vs. O.J. Simpson just in time to provide the long awaited write-up on Mexico’s underrated economy, tell you which country is most at risk to a robot attack and provide the latest on man vs. machine in Korea. So even as we battled a flooded basement and celebrated the 7th anniversary of the U.S. bull market (we just deleted The 7 Year Itch from our Netflix queue), it’s this week’s International Need to Know, where we shine the sun’s non-eclipsed warm rays of economic enlightenment on the crucial happenings of our little globe.

We’ve been teasing for a while that we would provide more info on Mexico’s underrated economy. It’s time to head south. Did you know Mexico’s economy is bigger than Canada’s at $2.2 trillion to our neighbor to the north’s $1.6? Or, how about the fact that nearly 40 percent of auto jobs in North America are located in Mexico? Mexico’s economy is bigger and more robust than most people realize. In real estate it’s all about location. It can be helpful in economies too. Mexico is the 15th largest exporter in the world due in large part to being next door to a bunch of ravenous American consumers. Nearly 80 percent of Mexico’s exports are to the good ole United States. In fact, Mexico is the United State’s third-largest trading partner (behind only Canada and China). And although voters in Michigan don’t want to hear this, Mexico is the United States’ second-largest export market. And what Mexico makes and exports is impressive. Mexico is a big exporter of high tech equipment, exporting 19.3% of its GDP in high-tech products. That’s third best in the world, trailing only South Korea and Germany but ahead of China. Of course, Mexico does face challenges. In certain provinces, violent crime is high, but as we noted a few weeks ago, most of the country is as safe as Finland. Low oil prices are affecting Mexico’s economy but in the long run that’s a plus, as it will force the country to continue to diversify its economy. There is also an inequality problem that has worsened over the last decade. According to Forbes, “In 2002, the assets of Mexico’s elite 16 were worth 2% of the country’s GDP. By 2014 these private fortunes accounted for 9% of GDP.” Mexico is not perfect but it has been operating under the radar–it’s economy is stronger , more developed and bigger than people realize.

Rise of the Robots…in China

We’ve discussed innovation in China, we’ve delved into their economic slowdown (more foreboding economic data came out this week showing a continued decline in exports and imports year over year in China–exports were down 25%!), but one thing we haven’t talked about is robots.  As you see in the chart below, starting in 2012, about the time worker abuse controversies were making news, the use of robots started to really take off. What does increased and more sophisticated automation mean for China’s economy’s future? For the world’s? We’re going to find out soon.* 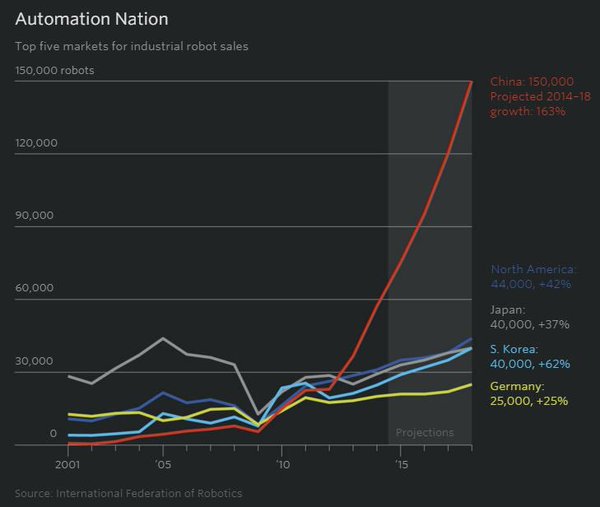 Man Vs. Machine, Round Two!

In a recent INTN, we told (warned?) you that artificial intelligence made a big breakthrough when Google’s AlphaGo beat a ranked Go (an ancient Chinese board game)player not through brute computing power but by using neural net technology.  And, we told you to keep an eye on an upcoming match pitting the computer against the top ranked Go player in the world, Lee Sedol.  The first two games of the 5-game match took place in Seoul yesterday and this morning with Alpha Go winning both and taking a commanding 2-0 lead.  Can Sedol make a comeback?  Have computers again permanently surpassed us in another human realm thought safe from machine?  Grab a beer, make some nachos and let’s get ready to rummmmbbble (while the computer quietly whirs). You can watch the matches live here.

*International Need to Know is one hundred percent written by humans…at least so far…as you know.

Innovative China, Its Slowing Economy and a Mexican Appetizer Tanking Brazil, Better Educated Women and the Donald Trump of China
Scroll to top