We were just returning from making a withdrawal from one of our offshore accounts when we realized we are deeply underpaid compared to aclassical cellist of the St. Petersburg orchestra.Still, we carry on and remind ourselves that Japan is not as bad as you think, face the changing look of death squarely in the eyes, and chuckle at the French and British. Yes, it’s this week’s International Need to know, providing important information lost in the cheese factories of Wisconsin while singing Merle Haggard back home.

It is common to think of Japan’s economy as a basket case. Overall GDP Growth has been slow to nonexistent there since the crash way back in Taylor Swift’s 1989. The government debt to GDP ratio is the highest in the world by far at 220%, much higher than Greece’s 179%. GDP growth last year was less than 1% and there are worries this year Japan will lapse back into recession. They have instituted negative interest rates, one of a growing number of countries taking this uncharted measure. If you ask about the Japanese economy, likely the answer you’ll get is Japan is a slow-moving, 30-year disaster. But remember, as we noted here before, that Japan’s population has begun shrinking. In discussing Japan’s microscopic GDP growth rates and stagnant economy, we too often forget that there are less Japanese then before, and certainly less working-age Japanese. So, despite everything, GDP per capita continues to grow as you can see in the graph below. When a country is shrinking in population, it’s difficult for the overall economy to grow but that does not meant things are getting worse for the individual. As Mr. Spock did not say, the needs of the one are not always affected by the economy of the many.  When I travel to Japan I do not encounter a dystopian future but instead what feels like a prosperous society. Yes, Japan has deep challenges and they may be creating systemic risks, but things are not as bad for the average Japanese as one would be led to believe.

The Changing Look of Death

Death in the world is changing. In the rich part of the world we are accustomed to dying of heart disease, diabetes and other such ailments. But the developing world is increasingly dying of these things too. The good news is we’ve made much progress on malaria, diarrheal diseases, HIV/AIDS and other maladies that have inflicted so much misery and pre-mature death in the developing world. But as you can see in the World Bank graph below, so-called first-world diseases such as strokes, diabetes and heart attacks are rapidly rising in low and mid-income countries. In fact, today as many people die of strokes as they do of malaria in these countries.  We need to genetically modify mosquitoes to carry a virus that makes people repulsed by French fries. 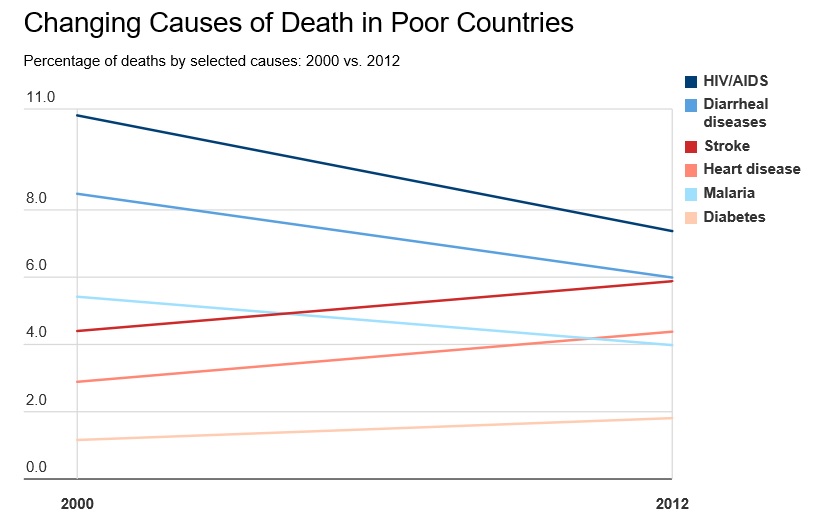 Brexit More Popular in France than Britain In just a couple months the good people of the UK will be voting on whether to stay in the EU.  It’s fortunate the French are not the ones voting since as it turns out more Brits than French prefer the UK be part of the EU. According to an Odoxa poll, 55 percent of the British want to remain in the union, but only 54 percent of French want this. I’m sure there’s an old Monty Python skit fit for this polling data. But, as you see below, the rest of Europe is happier at the prospect of the UK remaining a part of their club.