Journalists from more than 15 countries covered Kobe Bryant’s last NBA game last night. Chinese journalists were prominent among this flock (or is it a murder?) of journalists. Kobe is huge in China. So as we bid adieu to Kobe’s long career, we examine just how safe his money is in a Chinese bank, pull over briefly at a computer’s truck stop and gaze in wonder at where the wealthiest women are concentrated in the world. It’s this week’s International Need to Know,  working to be the Stephen Curry of international information sources.

Dipping a Toe in the China Banking System

We’ve promised a deep dive into the China banking system but we start gingerly, testing the murky financial waters. We’ve discussed in this space that China’s official statistics are often likeBill Clinton’s golf score, something to smile over but not entirely trust.That makes understanding the challenges of China’s banks difficult. China’s official statistics claim non-performing loans (NPL) at only 1.6%. Other estimates, as you see in the graph below, put the NPLs at above 20%.  Of course, this is not the first time there has been great worry over Chinese banks. I remember in early 2007 attending a program where U.S. Fed speakers talked about China’s NPLs and the systemic risk it presented to China’s economy. That was quickly forgotten when less than a year later the U.S. banking system nearly collapsed post-Lehman Brothers.  Back then China’s government dealt with the problem by essentially taking the bad assets from the banks and putting them aside. Continued rapid economic growth helped alleviate the problem over the next eight years. The Chinese government is well aware of the current NPL problem but the challenge today occurs in a slower growth environment. More on all this sometime soon when we may at least wade up to our ankles. 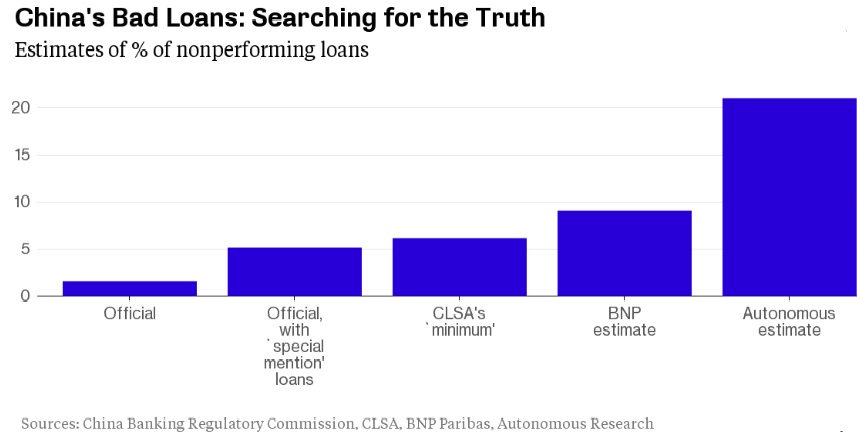 We’ve discussed self-driving cars before and will again and not just because they are a bit of an obsession of INTN, but instead because they promise to be a transformative technology. We first predicted in another forum in 2006 that self-driving cars would exist in 7 – 10 years and be commercially viable soon after that. But we are not here today to talk about cars but rather trucks. Last week, a dirty dozen of self-driving trucks from Volvo and Daimler traveled across Europe. The trucks departed from Stockholm, Stuttgart and Brussels and converged on Rotterdam. The trucks were participating in the European Truck Platooning Challenge, organized by the Dutch government. These trucks formed a digital convoy so that they traveled right behind each other, making them more fuel efficient. Humans should not tailgate but computers can do so safely. Unilever is hoping to deploy such trucks as early as 2017 making my 2006 prediction relatively accurate (please do not look up any of my other predictions). But, to do so, Unliver must leap through some EU regulations, which leads to one more prediction: regulatory, not technological issues, will ultimately be the main roadblock to seeing these vehicles on the Autobahn, I-5 and other roads. Here’s a video of the self-driving European trucks with a strangely fitting soft-jazz soundtrack.

Where the Rich Women Are

Perhaps not where you think. Via Ian Bremmerwe learn where women’s wealth is located, or at least that of “self-made”* female billionaires. If you thought the United States would be number one, you would be wrong. China takes the top spot. The United States is second but you may be surprised by some of the other top countries listed below.

*Self-made can be interpreted many ways, of course

Forgotten Japan, The Changing Look of Death and the French Like Brexit Confusing China, Peak Oil (Usage), Where are the Cynics
Scroll to top