Over three thousand years ago, ancient Babylonian shippers paid an additional fee to merchants so that they would be compensated should their shipment be stolen or lost at sea. and thus, insurance was created. An ancient papyrus scroll was recently discovered detailing a shipper’s complaint about the merchant’s stinginess in providing said compensation. Today, in the 21st century, International Need to Know is learning the same painful lesson that the insurance industry is not our planet’s most helpful, honest or fair business sector as we continue to deal with the aftermath of a human driver (we need self-driving cars!) running a red light and totaling our internal combustion steed. A certain insurance company should really replace their gecko logo with a snake. But we move forward nonetheless, whether by foot, pen, bike or pixel to explain oil is not the problem in Venezuela, explore where the smart companies are and tell you where you can find a cheap beer in this world. It’s this week’s International Need to Know, like an ancient Babylonian exploring the uncharted seas of world

Oil is Not the Lubricant for Venezuela’s Problems

Here at International Need to Know’s worldwide headquarters, our house is not made of glass.  So we do not mean to pick on anyone, but when we keep reading that Venezuela’s problems are due to continuing low oil prices, we can’t help but grab a small stone from our analytical quarry and at least lightly toss it at those making such misleading claims. The Skimm, a fine and enjoyable read, is but one example of those making this misleading assertion. In their daily email update they write that low oil prices are “good for your gas bill, very bad for Venezuela’s economy.” Yes, the decline in the price of oil certainly affected Venezuela’s economy. But the fall in the price of black gold affects all oil producers, from Saudi Arabia to Nigeria to Norway. However, only one oil producing country has completely empty shelves, the looming threat of starvation, power outages, deteriorating water conditions and the specter of chaos–Venezuela. The reason Venezuela is in these straits is not because of oil but because of misguided economic policies. From a convoluted currency system meant to encourage food imports but accomplishing the exact opposite, to instituting price controls to the government taking control over everything from soda making to supermarkets to food production, they have distorted and screwed up their economy. Venezuela’s current catastrophe is rooted in these and other misguided policies, not in low oil prices. The lower price of oil opened a view into the empty shelves of Venezuelan government thinking but it is not the cause of the country’s problems.

Where are the Smart Companies?

Not too long ago, we worried about the slow down in productivity growth all over the world. MIT’s Technology Review is also concerned, so much so that they went in search of the “smartest companies” in the world, compiling a list of the 50 smartest of the smart (see list below). By “smart,” MIT means companies that combine “innovative technology with an effective business model.” For our purposes we note that 64% of the companies on MIT’s list are based in the United States. In examining the smaller list of international businesses, we see that China has five companies on the list, validating our assertion that China does not get the credit it deserves for being innovative.* It’s slim pickings after China with both the UK and Japan having 3 companies on the list and Israel with 2. 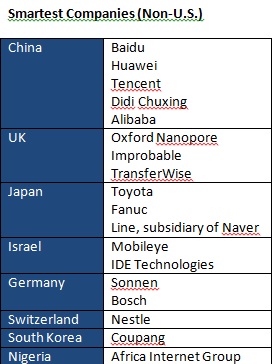 *Though we admit that all five of the Chinese companies are businesses that took ideas from U.S. companies (Google, Amazon, etc) and recreated them in China with all the government protection that entails.

Most Expensive Cities for Expats

Not too long ago we spoke with a CEO of a Canadian company who complained about Americans saying they were going to flee to Canada if a certain one of our presidential candidates somehow was elected. The CEO’s complaint was that Americans felt they could just waltz into Canada as if we owned the place without worrying about Canadian immigration laws. For those Americans wishing to leave their country for reasons political or otherwise, they may want to study the chart below showing the most expensive cities in the world for expats. The actuarial/benefits company, Mercer, priced 200 items in 375 cities and determined that Hong Kong is the most expensive city in the world for expats. Illustrating how the world has changed over the last two decades, Asian cities dominate the top ten. We’re not sure what it says about INTN, but we have spent time in many of the 10 cheapest cities for expats, and wager we know how to find a cheap beer in cities expensive, cheap or otherwise.

Most and Least Expensive Cities for Expats

China Bears, Brexit and Positive Workers The Ironies of Brexit, A New Banking Sheriff and U.S.-China Popularity
Scroll to top