International Need to Know recently stated to someone that by the time we need to purchase a new car, self-driving vehicles will be ubiquitous and with the rise of car sharing platforms we may never need to buy an automobile again. But, the future has a way of making fun of us, and certainly the driver who ran the red light on Sunday and barreled right into our car, mocked our visions of the future. But not even being slightly wounded by a reckless driver nor the trials and tribulations of buying a new car and dealing with insurance companies keep us from fending off Chinese bears, worrying about Brexits and examining where the happy workers are. It’s this week’s International Need to Know, your fully autonomous purveyor of crucial international information.

Okay everybody, gather around the campfire–we’re going to tell you a story about…wait, get out of here China bears. Come on, get away from our garbage–Well, I guess we’re going to have to address these rude China bears who came crashing into International Need to Know’s pristine global campground. They are definitely out there spewing out various troubling data about China’s economy. Even the IMF has gotten into the act with concerns about the level of corporate debt in China, which is now 145% of GDP, a very high level indeed. The IMF’s first deputy managing director (just how many deputy managers are there at the IMF? We’re angling for the fourth deputy assistant managing director position) David Lipton said in a speech in Shenzhen earlier this week that corporate debt “…is a key fault line in the Chinese economy . . . And it is important that China tackles it soon.” Lipton notes that this is mostly a state-owned enterprise (SOE) problem with SOE’s accounting for 55 percent of corporate debt, far greater than their 22 percent share of economic output. He further notes that these SOE’s “are also far less profitable than private enterprises.” But it’s not just corporate debt that has the bears riled up. As you see below, China is facing its worst job outlook since the Manpower Group began its surveys in 2005. The China Bears also point out that private investment is now below 4 percent (see 2nd chart below). Of course, public investment has spiked in recent months, but this has the bears worried too since they believe China can’t continue to prime the credit pumps to grow GDP as they have in the past. Certainly China continues to pile money into infrastructure, spending more than the U.S. and Europe combined, but that’s partly a function of underinvestment by the U.S. and Europe. And, of course, others probably think this is smart Keynesian policy in times of an economic slowdown. China’s economy has slowed down and is unlikely to grow at its previous rates. But, at least as of yet, it is not crashing and there is still lots of robust economic activity and economic transition occurring along with its deep challenges. So, we welcome bears to our garbage and may even share some of our food and drink, but we’re not prepared to cede the entire campground to them yet.

A week from today, the good people of the United Kingdom will vote on whether to exit the EU. As we write, the polls show those wanting to leave are in the lead. But we wonder if this will be similar to the Scotland separation election in 2014, where the polls indicated a toss up, but when it came time to pull the lever, voters found it difficult to vote “see ya later”. That being said, there’s a real chance that next week’s INTN will be delivered in a different world, one in which the EU is smaller. An even larger worry than the UK leaving is that their exit could set the stage for additional departures. A new Pew Center poll finds that 61% of the French have a negative view of the EU. That doesn’t mean, of course, that the French will vote to leave the EU. They may just want the EU to be reformed. In fact, one hopes the lesson learned, no matter which way the UK votes, is that the EU needs to reform itself, politically and in how it is structured economically. It is unfortunate that as the world in some ways is becoming more splintered institutionally, we live in an age of more and more transnational issues: climate change, global health challenges like the Zika virus, terrorism, Justin Bieber world tours and more. Perhaps the current institutions and transnational infrastructure are not fit to address these problems. But the answer should be to develop an infrastructure that will, not merely tearing down the ones we have. 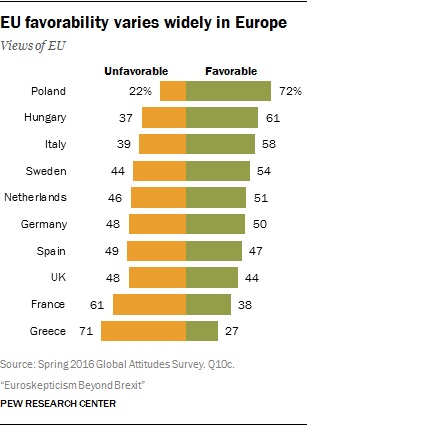 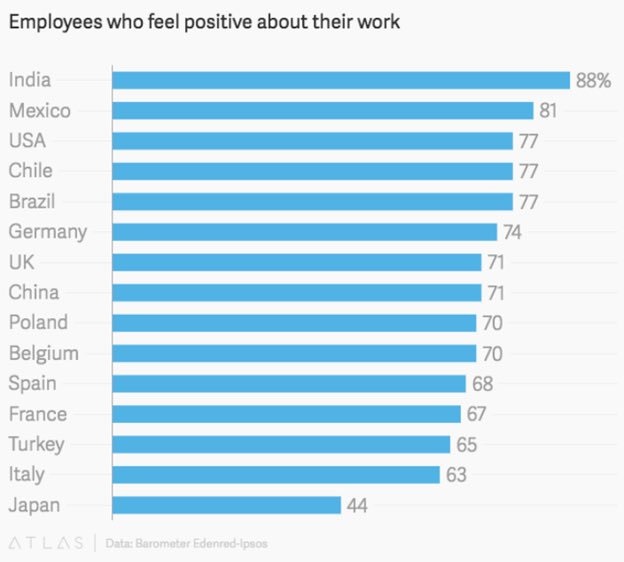