International Need to Know is prone to contrarianism, of which we are not necessarily proud–it is a vice like any other, occasionally useful and entertaining but also easily bent to mischief. So as we witness this summer of discontent with violence both real and rhetorical pounding us from every direction, our natural inclination is to see the blue skies, hear the birds chirping and taste the good times. After all, despite all the bad news the all-consuming media presents every hour of the day, by many measures, we live in one of the most peaceful times in human history. Populations are healthier. People around the world are more prosperous. Crime is down to near historic lows. So I read with interest (beware: it contains strong off-color language) an explanation of why we feel like the world seems doomed even as we live in relatively good times. But neither misanthropy or optimism prevented us from examining the emergence of Esports* around the world, the threat against Korean pop stars, and who around the world are buying up our houses. It’s this week’s International Need to Know, your clear eyed, full hearted, can’t lose look at our Friday Night Lights world.

Be a Good eSport*

Even as Russian swimmers down their Olympic sorrows in straight vodka rather than their usual THG-laced cocktails, we saw an article about the Brazilian soccer player Wendell Lira retiring to play videogame soccer. This led us to wonder about the rise of E-sports and how long the Olympics, full of corruption and polluted waters, will be larger than the E-variety. There are now close to 200 million regular viewers of Esports around the world and viewership is increasing at a rapid rate each year. The top esport players earn more than $1 million per year (we hear the sound of INTN readers rushing to buy Xboxes). So where are the largest centers of E-Sports? Lo and behold, they are not dissimilar to which countries will win the most medals over the next two weeks. Thumbs and screens are gaining on the javelin. Below are the top ten Esport countries compared to the top countries likely to win Olympic medals:

Analysts and experts continue to worry about the tensions in Asia between China and its neighboring countries, whether over the South China Sea disputes or military realignments. It’s one thing when these tensions could spill over into military action or endanger merchandise trade, but have things gone too far when K-pop stars in Korea are at risk? The Hollywood Reporter informs us that China is retaliating against Korea’s decision to deploy a U.S.-made missile defense system by banning K-pop stars from appearing on Chinese television. “According to two sources cited by the South China Morning Post, China’s national media regulator informed TV stations in Guangdong Province that TV shows featuring South Korean pop stars would not be granted approval to air ‘in the near future.'” Markets are betting on Chinese retaliation as “shares in South Korean entertainment companies took a dive Tuesday.” In case you don’t know, Korean pop music and TV dramas are very popular in China. But Gangnam Style might be going out of style in China, or at least among its leaders.

Whose Buying Your House?

The worldwide headquarters of INTN is in Seattle, a place that has seen rapid increases in housing prices over the last few years. Traditionally Seattleites curse the hated Californians for moving up to the Pacific Northwest and spoiling our pristine area with their, well, evil California-ness, including driving up our housing costs. But recently Seattleites also worry about Chinese driving up the cost of residential real estate. So we ask which international populations are buying houses in the United States? The National Association of Realtors tell us to Blame Canada, at least until last year when Chinese did indeed surpass Canadian buyers as the largest foreign buyers of residential real estate. That trend continues so far in 2016. The top five states attracting international buyers are Florida, California, Texas, Arizona, and New York. Washington is the fourth-largest destination of foreign buyers from China so we may be able to credit (blame?) Chinese at least for a little bit of the rise in our property’s value.  By the way, half of foreign buyer purchases were made using all cash. 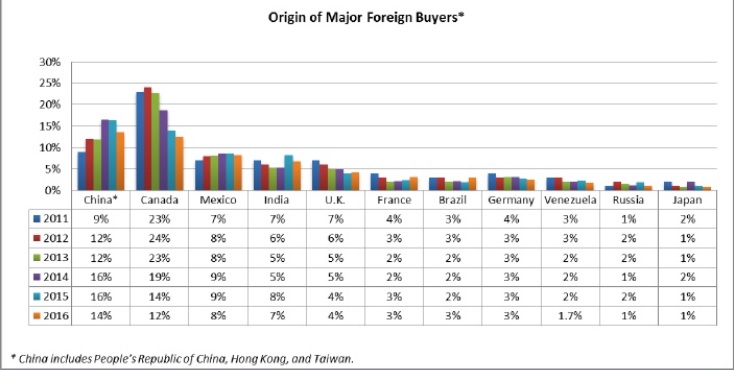 *Is it “eSports” or “esports” or “E-sports”? We dove down some deep, dark Internet holes to find out, including a long and rancorous Reddit thread (what’s more amusing [and dispiriting] than watching people cruelly insult others for how they spell a word that didn’t even exist a decade ago?), and we could find no consensus. Clearly the UN Security Council needs to take this up at its next meeting in October.

China Peak Coal, Slow Crawling Europe and Where the Under 20’s are Brazil’s Dirty Water, China’s Grand Ambitions and Who is Using the...
Scroll to top