Recently International Need to Know had the occasion to test out a virtual reality device and coincidentally shortly thereafter we met with the head of a virtual reality company. We’ve been curious about this technology but skeptical of just how earth shattering some claim it will be. But, when we tried out the technology not only were we impressed we immediately imagined dozens of applications for its practical use–from real estate to training to therapeutic uses. Of course, the head of the company has many more ideas in more depth than ours. We are living in a sci-fi world, or at least on the brink of it. But when we took off the goggles, removed the headphones and set down the controllers, we gazed steely-eyed at the reality of Brazil’s water issues, wondered at the expansive imagination of China’s government, and considered where the largest number of Internet users are.  It’s this week’s International Need to Know, augmenting reality with facts, analysis and critical information.

Almost as much attention has been focused on Brazil’s water as on gold medals at the Olympic Games this week. What with blue water turning to a suspicious green and athletes told to keep their mouths shut (always good advice for the finally retiring athlete that was Alex Rodriguez), Brazil’s polluted water is much in the news. But did you know that Brazil has more water than any other country, controlling 20% of the world’s water supply? And yet, Brazil has water shortages. Their problem is not quantity, it’s quality. Or even more accurately, policies and practices affecting water management. About 62% of Brazil’s energy comes from hydropower. But the real water hog in Brazil is agriculture. Irrigation for agriculture consumes 72% of Brazil’s water. Of course, the fact that so much of Brazil’s water is polluted is a problem as well. Only 43% of Brazil’s toilets are connected to a networked sewage system. The good news is that is up from 33% in 2004 so progress is being made. Brazil has the water they need (it is a resource rich country after all) but it is in desperate need of reforms to have clean abundant water. Like the movie, Chinatown, water is a metaphor for the corruption and stasis that plague Brazil as a whole.

When people discuss China’s external activities most of the focus is on their shenanigans* in the South China Sea or on its large infrastructure investments in Africa. But we’ve been tracking what is being called “One Belt, One Road”, a plan to build infrastructure as China works to create a modern day Silk Road. The plan would build highways, rail, ports and more stretching from Moscow to Jakarta (see Bloomberg map below). Essentially One Belt, One Road (a great title for an old country western song, btw), would connect China to the west by a land route through Central Asia and via maritime routes to the south through Southeast Asia, South Asia, Africa, and Europe. Estimates are that China will spend $1.4 trillion on this effort over the next 30-40 years, which one analyst notes is more in real dollars than the U.S. spent on the Marshall Plan after World War II. China trade with the countries affected by One Belt, One Road is already worth $1 trillion. If this ambitious new infrastructure effort creates economic development in these countries, China’s economy stands to reap the benefits. A Bloomberg article notes the ”soft power” that China wields with this plan. And certainly so. But, will China be able to continue such spending with slower economic growth? And how much mal-investment will take place in such a grand scale endeavor? In fact, China’s large investments in Africa have suffered from backlash and misallocation of resources and we should expect more of the same with One Belt, One Road. Nonetheless, such a grand undertaking affecting such a large chunk of the world economy deserves our continued attention. 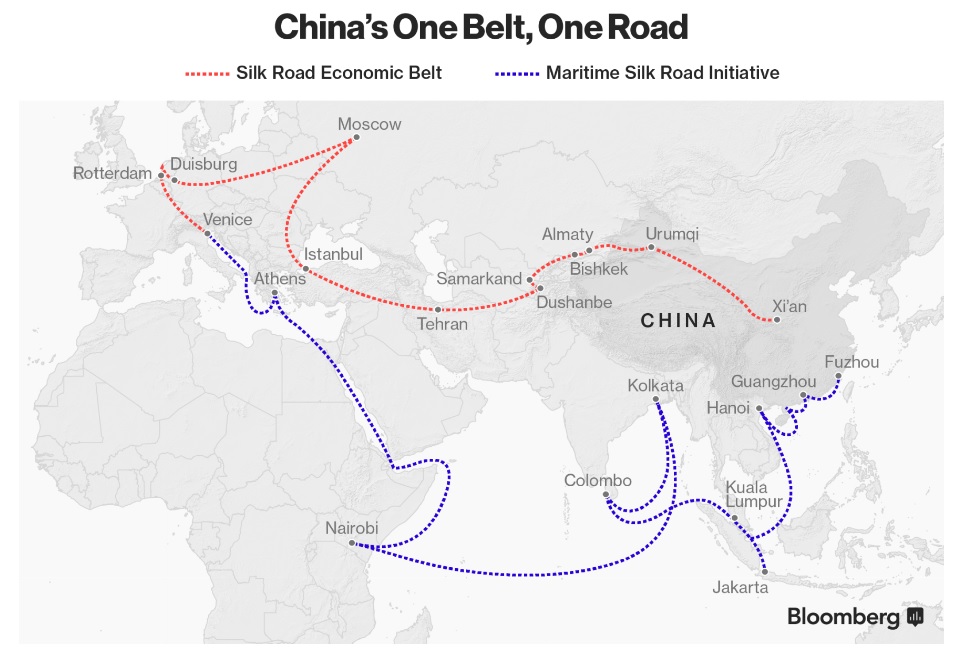 *A technical term that Foreign Policy Magazine should use more often

Internet Users Around the World

The Internet feels ubiquitous nowadays but there are still large swathes of people without access to the medium that provides essential viewing of cat videos. Which countries are the top users of the Internet? Scale matters so China is number one even though only just over half the country has Internet access. Still that means 721 million Chinese use the Internet and with a 2.2% growth rate, millions more are coming online in the future. Only a third of India has access to the Internet but that country’s large population means despite low rates of usage, it is still in second place with 462 million Internet users. And, India has a remarkable 30% growth rate so that low rate of Internet usage is transforming quickly. Iceland has the highest percentage of its population using the Internet–100%.  Every single person in the country uses the Internet. I would have thought that grandma Bjarkardóttir was disconnected but apparently not. The top ten list for your perusal below. 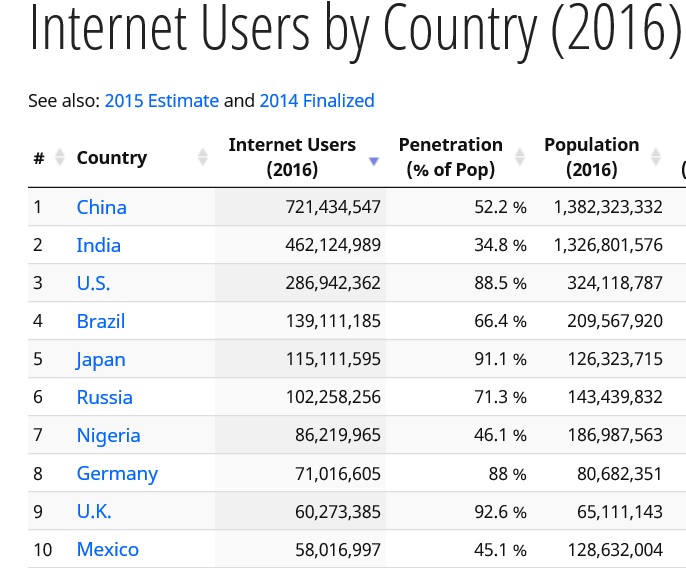 E-sports, Threatened Korean Pop Stars and Who is Buying our Houses Voting Against Democracy, Good News and Diversifying Genomes
Scroll to top