I tell those who are afraid of flying that it is not the flight you should be scared of, it’s the taxi ride at the end of it. I have been nearly killed in at least half a dozen cab rides in different locations around the world. Last week in a small town in Eastern Washington, my cab driver was very safe, kind and his life story enlightening. He drives a taxi because he lost medical clearance to drive a truck when he developed numbness in his hands, eventually requiring surgery to fuse two neck vertebrae together. He became a truck driver for the good pay (far better compensation than cab driving) and health care since he was a single father of two twins. He was a single father because his first wife had mental health problems, refused to take her medication, turned to drugs and alcohol, became violent and generally unstable and unsafe for their children. He met his second wife at church and is seemingly a very good father to her kids, whom he referred to as his kids, not step-kids.  He says they live in “a good Christian town where there’s seemingly a church for every two people.” But he and his wife have not been to church in eight years. For him, religion was a social valve. He is seemingly a good dad, good husband, and has experienced much economic hardship and bad luck. He told me he didn’t like his presidential candidate choices…but, he was going to vote for Donald Trump. If we had been paying closer attention to such stories, perhaps we would not have been so surprised Tuesday night. Sometimes the most foreign of countries is your own. So, this week we gaze at America briefly and what the election means for our global economic order, examine a few likely international trade policies of the Trump Administration (will it be rebranded the “Trump House”?) and then head back into the world in search of who needs talent. It’s this week’s International Need to Know, remembering that the wisest words anyone ever says are “I’m not sure.

America and politics are not our beat. But, although there are many ways to interpret Tuesday’s vote, placing it in the context of Brexit and electoral and political winds blowing in other parts of the world, it appears people are fed up with the current global economic infrastructure, and new players, both in America and abroad, in democracies and authoritarian governments, are ready to upend our current world order. That is our beat, or is at least part of it. As we have written before, we live in the most peaceful, prosperous time in the history of humans. The institutions, values and norms created out of the ashes of World War II, flawed as they are (and all human creations are imperfect), for the most part served us well. We here at International Need to Know will dance and sing in the second line at their passing. But, all things end and the world is changing, and changing rapidly. Technology has radically transformed how we communicate with each other. We appear to be on the brink of technological changes that will transform how we work (and if we work), how we transport ourselves, our capacity for violent destruction and how our privacy is kept or more likely is not. There are profound demographic changes occurring all throughout the world. Perhaps people grasp this in their gut even if they do not fully run it through a Nate Silver algorithm. This is not to dismiss the many less savory reasons for why people want to upend institutions and voted for Brexit and change in the American political landscape. The unifying emotion driving the demand for change is, of course, fear. Perhaps this fear is well-founded and we need to change the current international institutional infrastructure and culture to address a changing world. But if so, the big question is what takes its place? No one currently has the answer and this question does not even appear to have been thought about by those demanding change. We don’t know the answer either but I expect we will take a turn on the global policy dance floor, two-stepping and spinning our partners with some ideas in the weeks and months to come.

What to Expect Internationally

Although in many areas, Trump was remarkably vague about policy, in a few international policy realms he was consistent both verbally and in writing. I think we can all assume the Transpacific Partnership (TPP) is dead. In other areas of trade, Trump has said he will:

There’s much more in terms of refugees, relations with Russia, the Asia Pivot (we are likely to see more Philippine-like actions in southeast Asia and in other regions of the world), NATO, Syria, Paris climate change accord, nation-building and other issues. Suffice it to say, we are in a new world today. The post-world war II global infrastructure and alignments are ended.

But enough of such weighty matters, new world orders and what our future holds. Let’s talk about talent. Specifically, which countries have the most difficulties filling jobs because of not enough available talent and in which countries is filling jobs not difficult? We go to the Pacific Rim for both answers. As you can see in the chart below from ManpowerGroup (who can continue to keep their company’s name after Tuesday’s electoral results), 88% of Japanese employers report having trouble filling jobs. That is certainly a reflection of the aging demographics in Japan where the population is actually shrinking. Taiwan is high on the chart as well and for reasons of which we are in the dark, so is Romania. On the other side of the ledger is China, where companies have the least difficulty filling jobs. As always with this ever complicated country, there are many ways to interpret the ease with which Chinese companies can fill jobs: lots of talent, a slowdown in the economy, not enough jobs requiring talent and many other ways. We expect the new U.S. administration, if it pays attention to such data, will have an interpretation of its own. 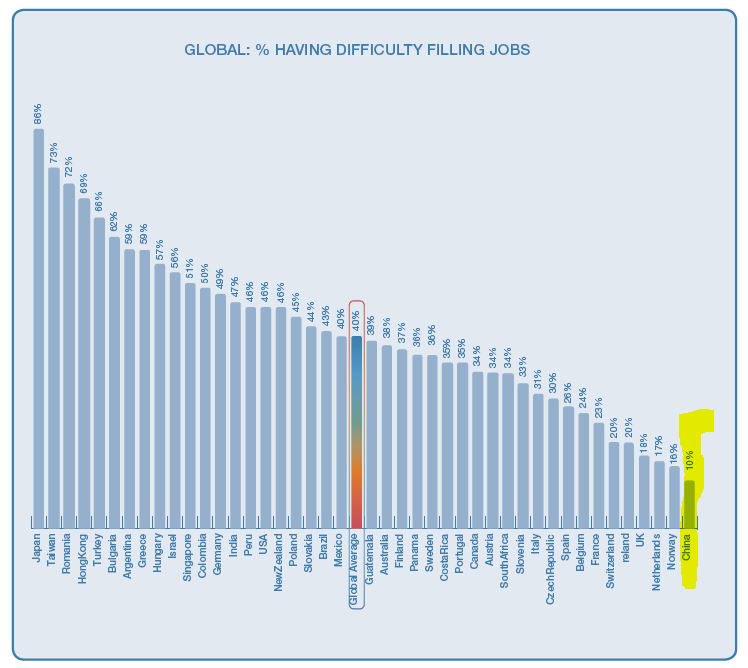 More on Peak Oil (Usage), European Immobility and Who Cares in the World Asia’s Realignment, A Global Super Grid, and Manipulating the Manipul...
Scroll to top