(Caution: Parts of the following was written early in the morning after the 2016 World Series [congratulations Cubs! Once every 108 years without fail]. We cannot vouch for veracity, grammar or decency but like the Cubs and Indians, we left it all out on the field.

International Need to Know is attending a Homeland Security Conference this week, working with a company that has excellent applications relevant to such endeavors. While talking with an Army commander at the conference we realized anew how fast (relatively) things change in our geopolitical world. Today’s enemies are tomorrow’s allies, vice versa and in many other combinations. The Army commander, who deals with asymmetric threats, told us about traveling to Vietnam to study the tunnels used by the Vietcong against America during the war there. He and his American military colleagues met with and were guided by the Vietnamese military and are using the information to apply lessons to today’s threats, including from ISIS. If you told a military commander in 1971 that his successor would be hanging with and working with the Vietnamese military, they may have thought you’d been exposed to Agent Orange.  So we keep our fast changing world in mind even as we tunnel for more evidence of peak oil usage, examine the immobility of much of Europe and wonder who in the world cares the most. It’s this week’s International Need to Know, like the Godfather of international information, keeping friends close, enemies closer and everyone else nearby too.

The rest of the world is starting to catch up to INTN’s bold prediction that peak oil (usage) is coming sooner than we think. Bloomberg New Energy Finance (BNEF) has a new study out that asserts the rise of electric vehicles could cause an oil crash similar to what we saw beginning in 2014. This could happen as early as 2023, a mere six years from now. Their thesis is that in 2015 the oil price collapse occurred because of a global oil glut of 2 million barrels per day. BNEF’s analysis is that if electric vehicle sales continue at their current rate, they will displace 2 million barrels per day of oil usage by 2023. And thus, another collapse in oil prices. However, they don’t think global electric vehicle sales will continue to increase as rapidly as they are today and so think more likely the oil price collapse won’t come until 2028. The chart below shows three different growth rates coupled with when oil displacement rates would reach 2 million barrels. Interestingly, Norway recently announced it is planning to ban the sale of new gasoline- and diesel-powered cars starting in 2025. You know Norway, the country that is one of the major oil producers. The world is moving quickly, including in the energy sector. But, as we have pointed out, electricity needs to be generated cleanly if this is ultimately going to be good for the environment. However, with the rapid improvments of solar, we expect that will be the case, certainly by 2030. So this is good news for the environment but expect some major disruptions to the world economy as it happens. In 20 years will Exxon be tweeting like The Last Blockbuster Store? 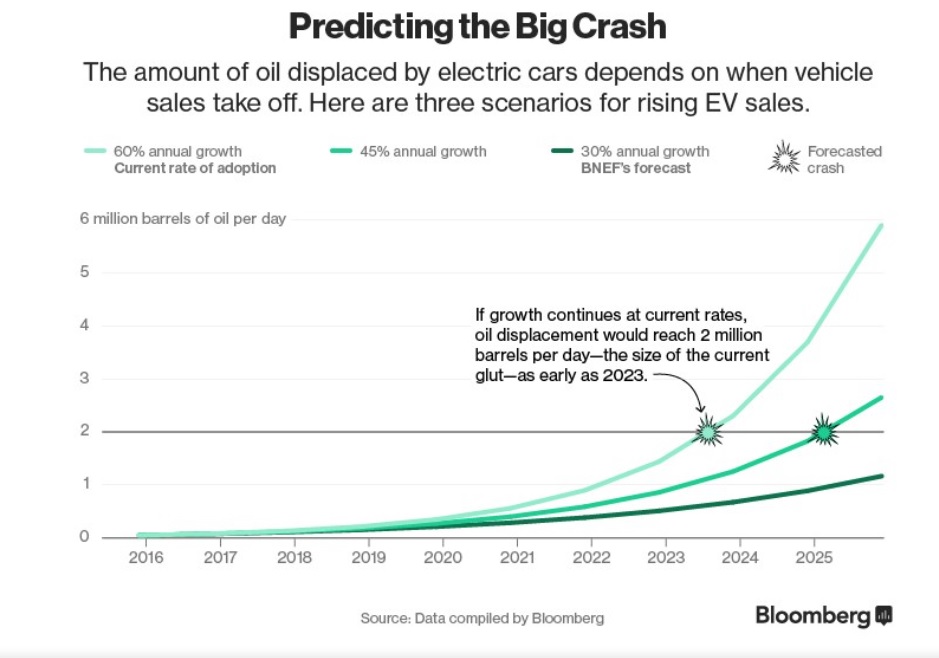 Last week we discovered that 70% of high skilled talent moves to only four countries. But what about movement within countries? The U.S. is known for having a mobile population from its earliest days when people fanned out west from the East Coast. And, it’s true, America is more mobile than other countries, especially Europe. According to a Gallup Poll, about one in four Americans “reported moving within the country in the last five years.” Only Finland, Norway and New Zealand move around in their countries as much as Americans do. The rest of Europe, not so much. Many Europeans I know have never moved more than 20 miles away from their hometowns. But there is even less internal movement in Venezuela and China which is surprising given the huge urban migration in China the last 30 years, but perhaps that great migration is slowing down. We have seen other evidence of a slowdown in this migration in recent years. Internal mobility can be beneficial to job matching. As job categories go away, being willing to move to find a new job can be crucial. If we face a slew of job destruction from automation in the next twenty years, mobility may become even more important. 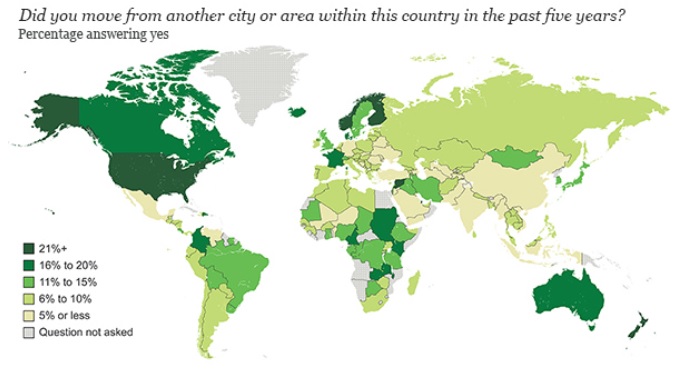 You may think the United States is the most charitable nation on earth but you would be wrong. America is second. Myanmar of all places is the most giving nation on earth, according to the Charities Aid Foundation’s (CAF) annual World Giving Index (I believe there is now an index for every single possible thing that can be ranked in our world–charity, economies and worst Kardashian*) Myanmar earned the top spot through “high levels of participation by donating money (91%) and volunteering (55%).” The Index also ranks which countries are most likely to help a stranger. The people of Iraq top this list with 81% of Iraqis helping a stranger. In fact, Middle East countries dominate this category as you see in the chart below. This matches up with my experiences in that part of the world where I have always found the people to be the most hospitable of any I encounter. With that, we exit our worldwide headquarters to help an old lady cross the street… 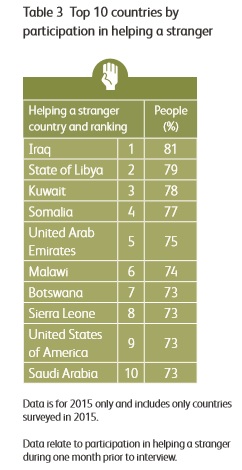 *No it’s not a seven way tie for last.

Where Talent Moves To, What the Chinese are Investing in, and Who is Drinki... Life in the World of Trump, What to Expect Internationally, and Who Needs T...
Scroll to top