We have pondered in this space of how large a role fear plays in what is happening in our world, in our revolt against post-world war institutions, in how we vote and in many other ways. The documentary, Amanda Knox, now playing on Netflix, can be seen as a metaphor for our times. One theme of the movie is our need to act tribally. There is a great scene showing Italians outraged at the acquittal of the American woman, and similarly Seattlites rallying around their city’s own. Another theme of the film is that most powerful of motivators, fear.  At the end of the film, Amanda Knox’s prescient, eerily, evocative words attempt to explain why she spent four years in jail for a crime she did not commit, but her words could just as easily describe the driving force of many of the world’s recent actions: “I think people love monsters. And so when they get the chance, they want to see them. It’s people projecting their fears,” Knox says. “They want the reassurance that they know who the bad people are, and it’s not them. So maybe that’s what it is: We’re all afraid, and fear makes people crazy.” We will continue to delve into fear and our world, but this week we focus on our continuing obsession about demographics,  examine the conundrums of China’s workforce and survey the world’s tourist slogans. It’s this week’s International Need to Know, not looking under every bed for monsters but instead trying to search for heroes in data, facts and figures.

International Need to Know stands behind few in our obsession over demographics which we believe drives more of the world’s ways than is commonly realized. So when we came across a tweet (we are no luddite but we do believe Twitter has ushered in the end of the world—even though, or maybe because, we use it frequently) from Simon Cox stating that although China’s working age population is decreasing, its workforce is not, it was like placing a fine glass of whiskey in front of us–we dare not resist. As we have pointed out, China’s demographics are aging more rapidly than America’s, but that so far has not impacted the size of the workforce. Even though the working age population has decreased since 2013, the number of Chinese working has steadily increased. Why this is the case is an excellent question. Perhaps because the one child policy means there is not the familial support necessary for Chinese to retire? Perhaps because savings are not enough to compensate for a still nascent social safety net? A growing working age population, if it continues, could help China to maintain stronger GDP growth. FYI, It’s overall population is currently projected to peak in 2030 at just over 1.4 billion people. 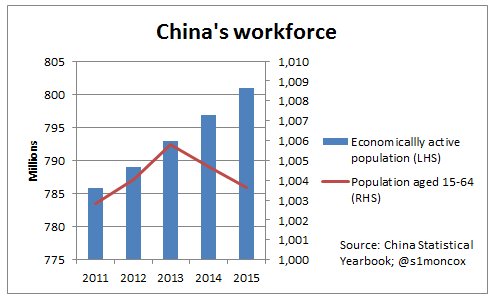 Who will Run the Computers?

Speaking of workers, the dearth of talent in the ICT field is well known. These companies cannot find enough skilled workers. That’s certainly true here in our neck of the woods where Amazon, Google, Microsoft and others are all fighting for talent. Now comes a study showing just how few people are capable of using computers at all. The OECD tested the computer skills of over 200,000 people across 33 countries (each country had at least 5000 people tested) in the age range of 16 – 65. Participants were asked to perform 14 computer-based tasks. “The tasks ranged in difficulty from very straightforward to somewhat complicated.” The researchers then defined four levels of proficiency based on the tasks the users were able to complete with Level 1 being people who may have troubles figuring out the on/off switch on their computer to Level 3 in which the participants were able to complete a variety of relatively more difficult computer tasks. The OECD noted that 14% of participants were below Level 1, not able to complete the most simple of computer tasks. They also noted that 26% of the participants were unable to use computers at all. International Need to Know was somewhat amazed at this high percentage of people in the 21st Century unable to use a computer. I guess we won’t have to worry about them reading this online newsletter. Only 5- 8% of the population of these countries achieved the highest level of proficiency, Level 3. Singapore and Japan had the highest percent of their population achieving Level 3 with 8%. Canada and Northern Europe each have 7% of their population in the top tier. In the U.S., only 5% of the population is able to achieve the top level. In a world increasingly reliant on computers, we are apparently helpless to use them. 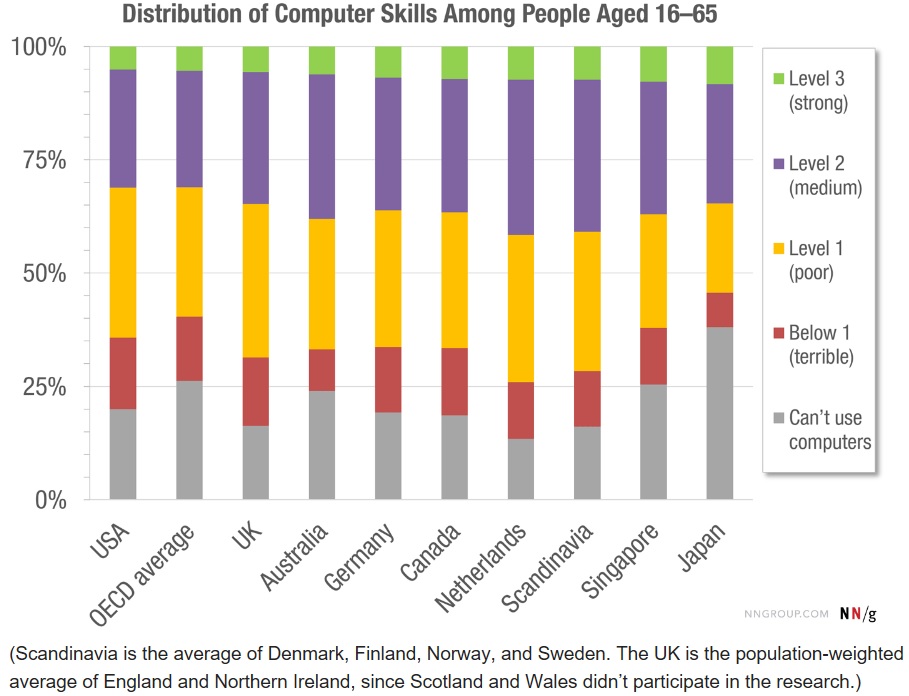 Via Jason Kottke, we stumbled across a map showing the tourist slogan for every country in the world, or at least for every country with a tourist slogan. Strangely enough, North Korea does not have a tourist slogan. South Korea does though: “Imagine Your Korea.” We hope Kim Jung-Il is not doing that. Russia’s is “Reveal Your Own Russia,” which Russian fake news bloggers have also adopted for America. We particularly like the enthusiasm of Lithuania’s, “See it! Feel it! Love it!” You can never use an exclamation mark enough in a slogan!!! Finland’s is direct, “I wish I was in Finland.” These slogans reveal much about what countries think of themselves, and perhaps others. Scroll and click to find your favorites.

Asia’s Realignment, A Global Super Grid, and Manipulating the Manipul... Italy Parties like its 1984, Date Finnish Women and Move to Singapore, and Africa’s...
Scroll to top