Somehow in our many years on this planet, we have never read John Steinbeck. We recently rectified this situation by reading The Grapes of Wrath. Steinbeck is very different than what we expected: far more gritty, earthy and melancholy. We enjoyed the book and are edified by it. And yet, we are struck both by its short-sightedness and how much it reflects today’s concerns. Steinbeck attacks the business interests who drove the Joads and other small farmers off the land, forcing them to emigrate to California. We, too, have great empathy for the Joads and their kindreds. But we wonder at the apparent naiveté in his attack on 1930s farming changes. Consider this passage: “The tractor had lights shining, for there is no day and night for a tractor and the disks turn the earth in the darkness and they glitter in the daylight. And when a horse stops work and goes into the barn there is a life and a vitality left…”. So apparently the world is better off without tractors? He goes on to ponder the effect on work by humans using machines: “So easy that the wonder goes out of work, so efficient that the wonder goes out of land and the working of it.” From this great temporal distance, it seems silly to expect tenant farmers to continue inefficient farming methods.There is a little Amish in all of us, wanting time to stop  time, but would Oklahoma be better off today with hundreds of thousands of small farmers? We wonder if 70 years from now what passes for humans will chuckle at our concerns of new technology and efficiencies. In the meantime, we wipe our sweaty brow that has never plowed or picked and peer into Italy’s troublesome economy, examine in which countries students score highest and serve witness to the longest serving leaders in Africa. It’s this week’s International Need to Know, farming for golden nuggets of information in the world’s fertile fields.

Eight months ago we diligently turned your attention to Italy and its banking troubles with a disturbing graph and these words: “Take a look at Italy where non-performing loans make up nearly 20% of its banking system’s assets. These loans are also about 20% of Italy’s GDP. All of this in the 8th-largest economy in the world. Yikes is the technical term to use here, I believe.”* We hope you took yikes to heart because the loans are still performing like the Carolina Panthers, which is to say, they aren’t peforming much at all. Prime MInister Renzi’s defeated referendum has apparently made private sector bailouts of the banks nearly impossible so eyes turn to the European Central Bank for such help. Italy’s economy, to use a technical term every bit as precise as “yikes,” is in a shambles. Per capita GDP is lower today in Italy than it was in 1999 (before it joined the Euro). Italy’s production levels are at 1984 levels–that year the Dow closed at 1211, Apple’s first Mac was sold and a Trudeau was prime minister of Canada (okay, not everything’s different). All this is to say that there’s good reason there is political upheaval in Italy and we expect more chaos to come. There are a number of upcoming elections in Europe this year and they likely will all be influenced by the views reflected in the Pew poll graph below. 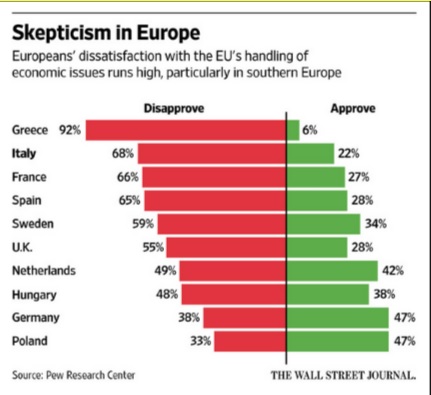 *We may have been prescient about Italian banks but we’ve made more than one mistake in the last year of writing INTN. In the interest of fairness and transparency, we will report on them in this space before the end of the year

As kids prepare for holiday break, the OECD’s latest report on education around the world reveals that Singapore outperforms the globe in educating its children. Annually the OECD conducts its PISA survey “which evaluates the quality, equity and efficiency of school systems.”: They tested over half a million 15-year-olds in 72 countries to see how they perform in science, reading, math and collaborative problem-solving.” The report points out that despite increases in funding per student since 2006, there has not been an improvement in outcomes. In most OECD countries, large number of students–1 in 5–fall short of “baseline proficiency.”  There are a few stars, however: “only in Canada, Estonia, Finland, Hong Kong (China), Japan, Macao (China), Singapore and Viet Nam do at least nine out of ten 15-year-old students master the basics that every student should know before leaving school.” There continue to be gender gaps in all countries save Finland. In Finland, girls are more likely than boys to be top performers in science. We had occasion to meet with and study Finnish schools a few years ago and saw this success first-hand. Other countries have much to learn from their approach. 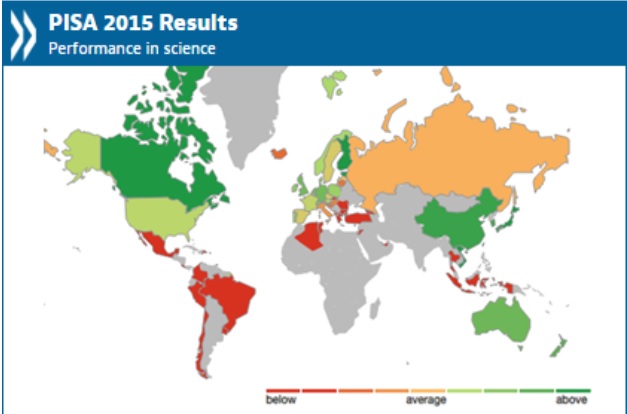 INTN can neither confirm nor deny that we received from unknown sources a way of watching the Broadway sensation** Hamilton without flying to New York and spending all our clients’ money on tickets. The show was excellent, certainly much better than our President-elect’s reviews of it. One of our favorite songs in the play is One Last Time, sung by George Washington, a musical version of our first President’s farewell address. The song reminded us of the poll we displayed here earlier in the year showing support for democracy decreasing, especially among millennials. Such support is also low among a certain set of African leaders who have been serving since Italy’s production was still increasing. Below you will see a chart of the longest-serving leaders in Africa. We look amusedly at compliments of how Castro out-lived so many U.S. presidents as if that was an amazing achievement. We’ll take Washington over Castro and these other leaders’ rule any day.

*How did those two words marry over the years? Why are there not MTV sensations? Nobel prize sensations? 7th Avenue sensations? “Sensations” really needs to play the field some more. Lexicon monogamy is bad.

China’s Workforce Conundrum, the World Can’t Use Computers and the... Lead and Terrorism, Energy Infrastructure and Religion and Education
Scroll to top