Nostalgia, memory and quests are funny, tricky, even occasionally dangerous things. Years ago when we were but a teenager, we read a science fiction novel called Space for Hire, which at that age we loved. It was about a hardboiled detective named Sam Space (no relation) and in some ways foreshadowed the Star Wars movies. A sequel to the novel existed but was out of print and extremely difficult to find. A friend and I searched in used book stores but in our small town the sequel proved elusive. Years later we found it in a used book store on the east coast. We eagerly read the book and…it was terrible. A huge let down. In fact, when we re-read the original Space for Hire years later, we discovered to our shock and dismay, that it was not only not very good but also full of racism and misogyny. The quest for the book was far more enjoyable and edifying than the books themselves. Of course, today such quests don’t really even exist with Amazon and the Internet putting everything at our fingertips, eyes and ears instantly and continuously. It is a better world because of these technological developments but as with everything there is a trade-off. Something is lost in not being able to hunt for today’s equivalent of Space for Hire, and in confronting our nostalgia and memories we found our innocence lost as well. But neither technological advances nor nostalgia pry us from continued worries about productivity, the mystery of the missing 90 million in China and the scientific validity of Japanese Forest Bathing (a sentence we could type over and over again).  It’s this week’s International Need to Know your hardboiled look at our increasingly soft boiled world.

May you live in interesting times is the alleged curse. More apt, we believe, is may you live in unproductive times, which indeed we are. Last year we warned about the near worldwide slowdown in productivity. The OECD recently published a report adding more fuel to our concern fire. The report, entitled, Compendium of Productivity Indicators (has there ever been a sexier title?), details the productivity slowdown and notes that the UK and Japan are particular laggers in productivity. In addition, “among OECD countries, labour productivity in manufacturing slowed most markedly in recent years in the Czech Republic, Finland and Korea. In business sector services, the slowdown was most notable in Estonia, Greece, Latvia and, to a lesser extent, the United Kingdom.”  Small businesses are seeing greater productivity gains than large companies. And yet large companies are dominating economies more and more (hmm, policy makers might want to think about why this is). Remember that GDP grows two ways–an increase in the working age population (which as we have documented is down in most countries except India and Africa) and rising productivity, which is not rising much at all currently. That means economic growth will continue to be slow around the world with all the consequences that come with it. 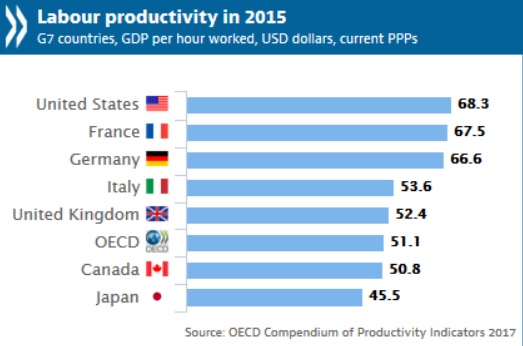 Is China Smaller Than We Think?

China is big. Enormous really. But perhaps it is not as large as advertised. Yi Fuxian, a researcher at the University of Wisconsin-Madison, recently reported on his research that claims “China’s real population may have been about 1.29 billion last year, 90 million fewer people than the official figure released by the National Bureau of Statistics.” Yi’s research finds that there were 377.6 million births between 1991 and 2016 rather than the official figure of 464.6 million. Now 377 million is still a big figure, larger than the population of the United States, but Yi’s contention is that 90 million fewer people is a big deal. For instance, it would mean China’s aging demographics are worse than we thought. A small working age population without continued large gains in productivity means slower economic growth as we noted in the first story this week. So it’s a 90 million question of whether Yi’s data analysis is correct, and if so, what that will mean for China’s family planning and economic policies going forward. BTW, China’s yield curve inverted this month. Inverted yield curves often predict a recession. More on this soon.

In these tumultuous times, let’s slow down a moment and contemplate something soothing. In this case, the Japanese practice of forest bathing and recent scientific studies showing it is good for your health. Yes, forest bathing, which Japan instituted as part of a national public health program back in 1982 is “basically being in the presence of trees.” Japan not only included it as part of their health program but examined the impact of tree bathing in a study from 2004 to 2012. They studied volunteers who went into a forest and then into a controlled environment and concluded, “Forest environments promote lower concentrations of cortisol, lower pulse rate, lower blood pressure, greater parasympathetic nerve activity, and lower sympathetic nerve activity than do city environments.” This is apparently due to “various essential oils, generally called phytoncide, found in wood, plants, and some fruit and vegetables, which trees emit to protect themselves from germs and insects.” We’re feeling calmer and stronger just writing about it. Have a good Memorial Day Weekend and find some time to hang out among the trees, or since our world is more and more urbanized, at least in the Land of the Glass Pinecones.  Their seeds are made of rhinestones.*

*There was a time, long ago, when we were obsessed with this song. We are still proud of this.

Drones Gone Wild, One Belt One Road and Who Votes Japan is Different, Will China Become Japan, the Air Up Here
Scroll to top