Our favorite current TV show is Better Call Saul, a kind of prequel to Breaking Bad. We in fact prefer it to its antecedent. Its quietness, more sophisticated character study, more complicated moral compass we find far more intriguing. The main character, Saul/Jimmy, is at odds with his brother, Chuck, who spends considerable time trying to harm Saul. Chuck is mentally ill, manifesting itself in an irrational fear of electricity. In the most recent episode, Saul wins a minor victory over his brother which leaves Chuck holed up alone in his house, apparently in the depths of despair. A character sympathetic to Chuck asks Saul to talk to his brother. He refuses–after so many years of turmoil with his brother, he turns his back on him in perhaps his brother’s greatest time of need. The character sympathetic to Chuck says to Saul, “Chuck was right about you all along. He’s mentally ill, what’s your excuse?” She finishes her rejoinder to Saul, who is sipping a celebratory drink, by saying “Enjoy the champagne.” It is a devastating moment. Our sympathies are with Saul but the show reminds us that no battle, especially those involving mental illness, is won without loss. So far, society and science have proven themselves inadequate to the challenge of dealing with mental illness. Mental illness does not discriminate–it afflicts every race, every gender, the poor and rich alike, the downtrodden and even the most powerful. So as we watch rapid fire events in this world, we will remind ourselves of the devastating rejoinder, enjoy the champagne. Our glass is neither half full or half empty but Waterford crystal clear as we examine drones gone wild, the shifting political alliances with China and who votes the most (no not Chicago graveyards). It’s this week’s International Need to Know providing sunshine on happenings around the world even under continuous gray skies (c’mon Seattle, where’s spring?).

One of our earliest posts on this platform was about drones and how the U.S. needs to remember that we will not have a monopoly on them forever. We noted that many other countries now have drones. Turns out nowadays criminals do too. So much so that The Telegraph reports “a British prison has become the world’s first to use a new system designed to stop drones flying over perimeter walls to drop contraband into jails.” The prison is creating a drone shield consisting of sensors that can jam drones and prevent them from delivering drugs, weapons, cell phones and other items the jailers don’t want their prisoners to have access to. The name of the system, created by the UK companies, Drone Defence and Eclipse Digital Solutions, is Sky Fence, a science fiction overlord type of name which invokes as much fear in us as the prisoners do in the jailers. We live in interesting times. 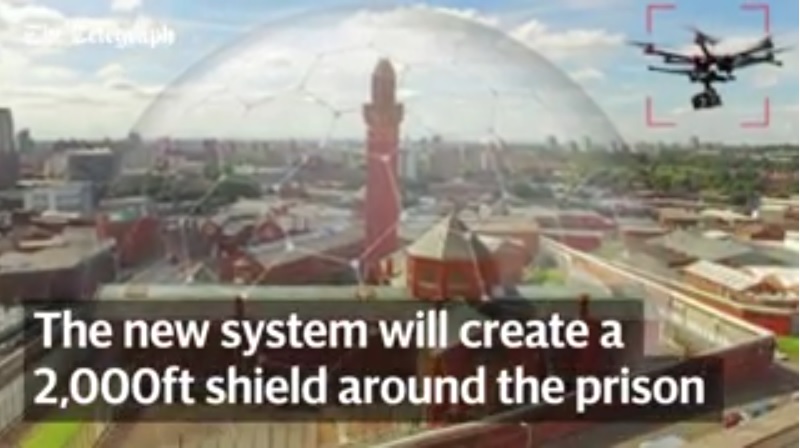 Who are you With?

The world is changing in ways that can seem uncomfortable to many. China’s growing importance in the world, coupled with political turmoil in the United States and Europe, is informing how the world interacts with China. We offer two recent examples. First, at the One Belt One Road summit (see our post last week about it), a number of final communiques were released. But EU members did not sign onto a trade statement “because a series of concerns they had raised with the Chinese government were not incorporated into the draft text.” These concerns focused on a lack of environmental protections and an unfair tendering process. The EU has been increasingly concerned about China’s closed markets. In fact, the EU recently imposed anti-dumping duties on steel and other products from China. China and the EU’s relationship will continue to evolve. At the same time, China’s relationship with North Korea also appears to be changing. China apparently prevented North Korea from conducting a nuclear test on April 20th. This is the first time China has exerted such pressure on North Korea. Experts note it is difficult to take action against North Korea because they could easily attack South Korea with nuclear weapons in a matter of moments. Less noted is that China is also vulnerable to such attacks. So their willingness to take action is notable. As China strides larger across the world stage, they will find the same challenges and complications that confronted other world powers throughout history. There is no free or easy ride.

There have been a number of high stakes elections over the last year, some of them with surprising results. They have been influenced by everything from worries about transformative technology, concerns about immigrants, reactions to income stagnation and even by Russian interference. The political pros will tell you (often for a hefty price) that voter turnout is a big factor in who wins elections. They break down turnout in a myriad of ways, from income and education levels to race and gender. But overall in which countries is there the highest voter turnout? Belgium comes in first according to the Pew Research Center which is ironic given complaints that the European Union (EU) is not a very democratic entity and Brussels is home to the EU.  Belgium is followed by Sweden, South Korea, Denmark and Australia. In this Pew list, Turkey brings up the rear although given recent events in that country those poor voters may not matter at all (and could be viciously attacked in Washington D.C.) 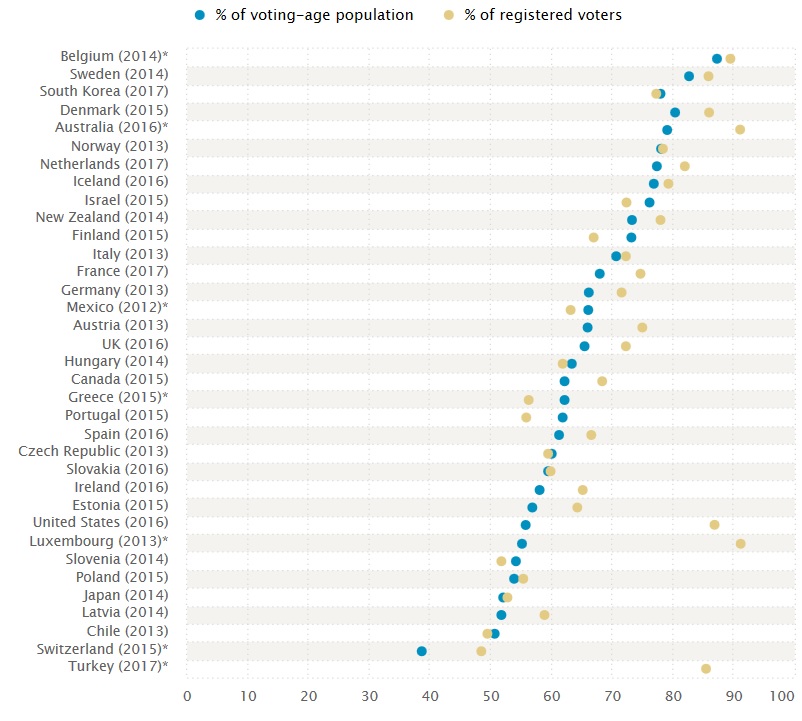 Fast & Furious, China Belt with Indian Suspenders and where CO2 Emissions... Unproductive World, Is China Smaller than we Think and Forest Bathing
Scroll to top