Perhaps there is no greater mystery in the universe than intelligence and consciousness. The latter is, in fact, impossible to define and test scientifically. We were reminded of this not just from our current political world but also from the work of an evolutionary biologist who asserts that spiders store information in their webs. He claims “that a spider’s web is at least an adjustable part of its sensory apparatus, and at most an extension of the spider’s cognitive system.” We did not entirely understand the biologist’s argument though we are now even more wary of stepping through spider webs in our yard. He also notes that octopi have 500 million neurons in their arms (which we did know). So where does the consciousness of an octopi reside? In its arms or its central brain? Even as we learned about cognitive spider webs, we read an article about scientists studying macaque monkeys  and their ability to distinguish faces. The researchers “watched as monkeys looked at a series of 2,000 different faces and recorded which neurons were active in the so-called ‘face space’ of their brains.” The scientists then worked backwards and reassembled depictions of the faces from information contained in the firing neurons. And, they were amazingly successful as you see in the images below. We are pretty good at remembering faces but names not so much. So our intelligence is at least as good as a monkey’s. All this leads us to a special technology week at INTN, where we examine why technology is making us forget about Paris, worry about the end of Moore’s Law and examine the status of artificial intelligence around the world.  It’s this week’s International Need to Know, your digital source of information in an analog, digital and spider web world of information. 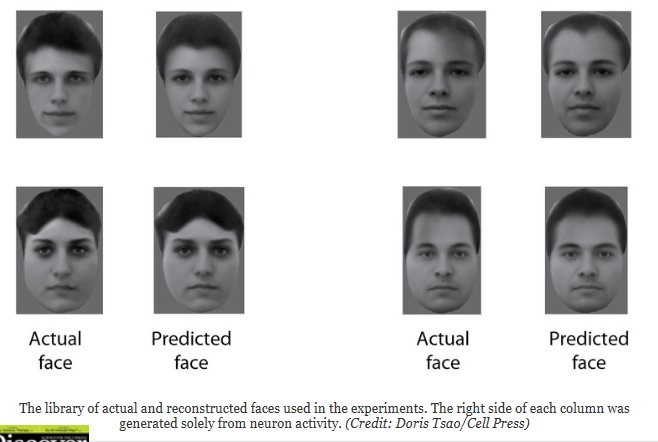 For many reasons, we think the U.S. Administration pulling out of the Paris Climate Agreement was unwise and short sighted. As Major Strasse might have said in Casablanca, “we know why you left Paris, Mr. President,” But like Humphrey Bogart, our sporting interest gives us hope that the U.S. leaving the agreement will not have a big impact on the fight against climate change. That’s because, as we have noted before, the world is already reaching a tipping point on renewables. In India, for example, as you see in the first graph below, solar energy is competitive price wise with coal. As a recent Bloomberg article reports, “the cost of solar generation in India has fallen by more than half. The country’s competitive auctions for solar power have pushed prices below 2.5 rupees ($0.04) per kilowatt-hour. In fact, the levelized cost of solar—“ a measure of an energy project’s lifetime costs divided by its lifetime energy production—is now lower than coal-fired power. At the same time, China, already the largest producer of renewable energy, “will install 7 to 8 gigawatts of rooftop solar in 2017 — an amount equal to the cumulative installed rooftop solar base up to 2016,” according to Bloomberg New Energy Finance. The challenge is NOT renewable energy generation, it’s storage, and there too we see much progress. According to a McKinsey report, “battery-pack costs are down to less than $230 per kilowatt-hour in 2016, compared with almost $1,000 per kilowatt-hour in 2010.” These technological breakthroughs are why we are hopeful that Paris won’t amount to a hill of beans in this crazy world. 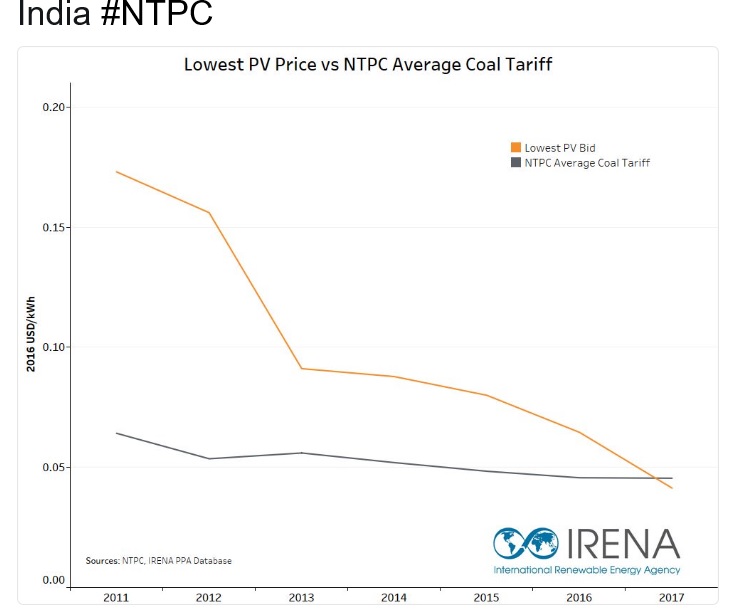 Is this the End of Moore?

Last year, we noted the possibility of the end of Moore’s Law—the idea that transistor density doubles every two years or less–and now the head of a semiconductor company confirms it. Jensen Huang, the CEO of Nvidia recently gave a presentation where he stated, “Microprocessors no longer scale at the level of performance they used to — the end of what you would call Moore’s Law.” Intel, however, disputes Huang’s contention even though they themselves are not meeting the requirements of Moore’s Law: “To get from 45 nm to 32 nm took about 27 months, 28 months to go down from there to 22 nm and 30 months to shrink to the current 14 nm process. And that’s where Intel has been stuck since September 2014.” In fact, Huang says only a handful of companies can now afford the multi-billion dollar investment to create these kinds of new chips. The expensive nature of today’s chip work has led to a consolidation of the industry (or maybe it’s the other way around?) so now there are only five companies making the most advanced chips, down from 13 a decade ago. As we look around the world, the companies are fewer and larger and the innovation smaller.

The Spread of Intelligence

In recent years there has been much excitement over progress in artificial intelligence (AI). A computer beat one of the leading GO players in the world earlier this year, progress is being made on autonomous vehicles and AI is increasingly diagnosing cancer better than humans. Now comes a survey of AI engineers and researchers asking them when they think various AI milestones will be met. The more than 350 AI researchers surveyed believe machines will be able to translate foreign languages better than humans within 10 years, perform better as retail sales people within 15 years (better than Nordstrom?!!), generate a top 40 pop song within 12 years (Taylor Swift obsolete?) and fold laundry in 6 years (we give up that chore willingly but wonder if our cats will still jump onto the clean towels when a robot is folding them). In fact, these researchers believe all human jobs will be automated within the next 120 years. Interestingly, Asian researchers are more optimistic than American and European researchers as you see in the second chart below. How their optimism squares with the death of Moore’s Law is an interesting question though it may have to do with the emergence of quantum computers and 3-D chips. Although we are not necessarily more pessimistic than these researchers we look at AI advances somewhat differently. First, as jobs are automated, new type of jobs, more suitable for human intelligence, will emerge. Second, we expect, like spiders and octopi using external intelligence, that humans and machines will merge, so the world will not necessarily develop a human vs. machine battle (the true fight will be against flying cockroaches). We await this new world, as we await many things, with a mixture of wonder and worry (and a strong cocktail in hand). 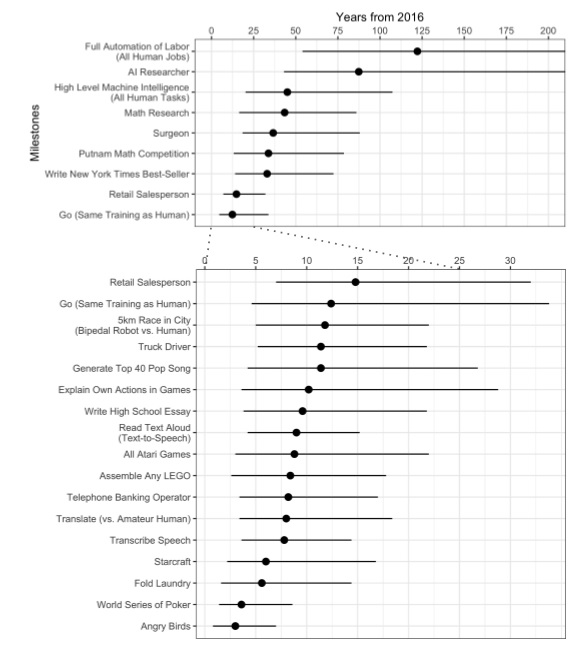 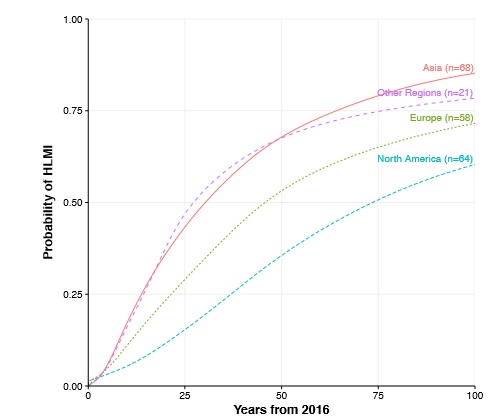 Japan is Different, Will China Become Japan, the Air Up Here Mind the Gap, Canadian Cows & Climate Change and the Price of Fun
Scroll to top