Incentives are a funny thing. They drive so much in our world and yet often have unintended consequences. A few years ago, like many in our socio-economic demographic, we bought a Fitbit to measure our exercise, sleep and other such metrics. We lost it fairly quickly but then our wife gave us another one as a gift. We have not lost that one, which speaks to a certain incentive in itself. But the Fitbit has changed our behavior. Where once we would worry about getting the best–read nearest–parking spot, now we park further away just to get more steps recorded on our Fitbit. That is a good thing. On the other hand, we are often less efficient nowadays. Where once we maximized our trips back and forth from our car to our house, carefully carrying many things at once, now we purposefully make many trips between house and car, again in order to record more steps. We do the same kind of thing on house projects, going back and forth to get different tools. Perhaps this is more physically healthy for us and there may even be a Zen-like aspect to it leading to more mindfulness, but by being less efficient we are surely getting less done in life. It occurs to us that the optimal use of a Fitbit is someone who walks in their sleep. But, we don’t recommend taking that step. We do recommend minding the employment gap, examining the case of the Canadian cow and analyzing the cost of fun. It’s this week’s International Need to Know, throwing no-look passes for data and knocking down three pointers of analysis as we try to be the Golden State Warriors of international information.

Political volatility around the world continues to be high as we saw in the recent UK elections. Some may think voters are making unwise choices but there is a reason for the angst and sturm of the voting class with further evidence coming from an Organization for Economic Cooperation and Development (OECD) study on employment this week. The good news is that in OECD countries the “employed share of the population aged 15 to 74 years rose for the third consecutive year,” finally reaching pre-financial crisis levels. The bad news is that the share of middle-income level jobs has fallen. There are more high income and low income jobs in OECD countries, but the kind of jobs that have been the foundation of liberal democracies are eroding away. This is due mainly to demand for high skill jobs. The OECD reports that “Between 1995 and 2015, the middle-skill share of employment fell by 9.5 percentage points in the OECD area, while the shares of high- and low-skill occupations rose by 7.6 and 1.9 percentage points, respectively.” In the chart below you can see how in every OECD country high skill jobs have increased while middle skill jobs decreased. Low skill jobs increased in all these countries except Hungary and the Czech Republic. We note the UK is home to one of the larger gaps of jobs though not nearly the largest. The world is in the midst of a large economic transition and political volatility is likely to remain high throughout the transition. 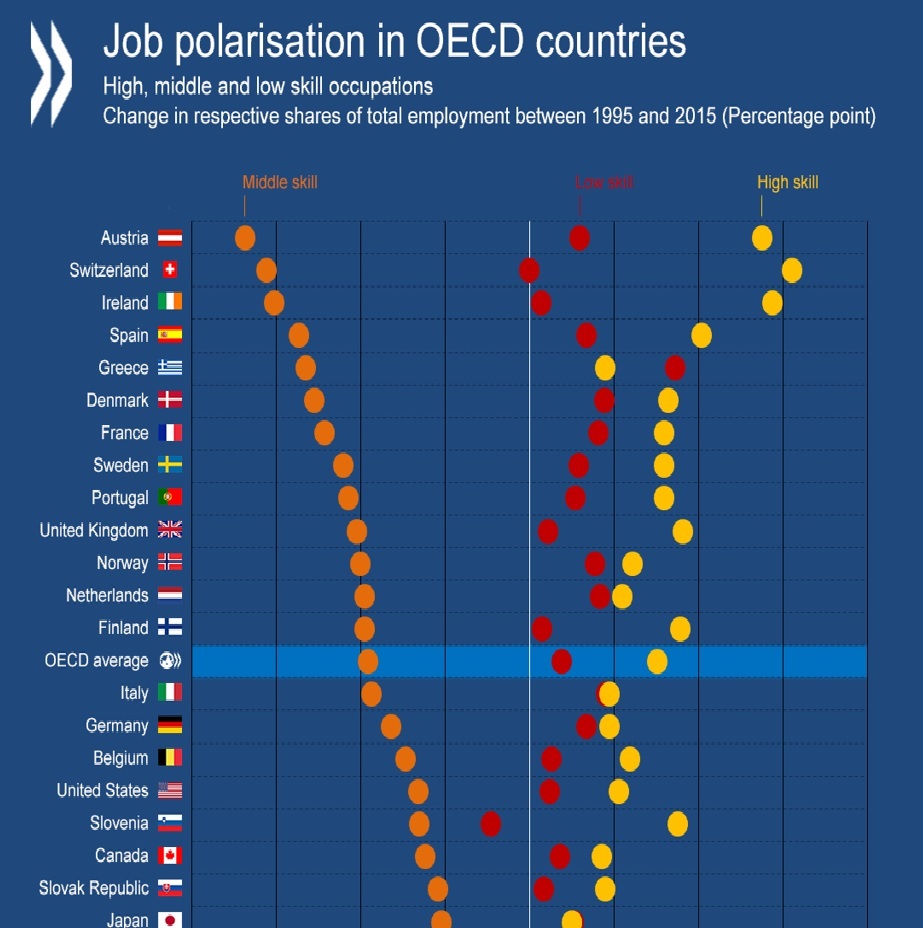 Climate Change & the Case of the Canadian Cow

A new book, Drawdown, lists the top ten solutions for addressing global warming. You are likely to be surprised by the list, as we were, or at least by some of them. We were not surprised by number 4, however–eat a plant rich diet. After all, we are aware that cattle flatulence is a major emitter of global warming gases. In fact, the book notes that “if cattle were their own nation (and what a boring nation it would be, animals standing around eating a lot and farting–wait, there are large swathes of America just like that), they would be the world’s third-largest emitter of greenhouse gases.” Alas, we like BBQ too much and relish our Five Guy burgers (though relish is not one of the condiments we use) to become a vegetarian. But then comes news from Canada of an effort to genetically engineer a cow so it does not pass gas. “The Genome Canada project, led by Filippo Miglior at the University of Guelph and Paul Stothard at the University of Alberta, harnesses labs in the US, UK, Denmark, Australia, and Switzerland to help identify cows that produce fewer greenhouse gases, with the ultimate goal of distributing the responsible genes—conveniently transported in the form of bull semen—to areas that don’t have the resources to develop their own greener cows.” Perhaps someday we will be able to enjoy our beef without there being a beef about what it is doing to the environment.

The Price of Fun

Fun, as that great philosopher Ferris Bueller could tell you, is an underutilized commodity, perhaps more so than ever today. Children, who by all rights should be in their prime for having fun, are instead sent on forced marches of activities organized to the last second and given mounds of homework one would expect in a chemistry PhD, but not for a ten-year-old. And, our politics today are certainly not much fun unless you are of the same bent as the Marques de Sade. So perhaps it is high time to examine the price of fun. No not the metaphorical consequences of having fun you killjoy, but the actual cost. For that we turn to the World Economics Cost of Fun Index which as you see in the first chart below has gone up considerably since 2011. The index “is based on average end-user prices for typical recreational activities and items in national currencies indexed to January 2011 = 100.” When looking at individual countries it should be no surprise that the cost of fun has spiked in Russia in recent years  Does Vladimir Putin look fun? I don’t think so.* Fun is still affordable in China though it has gone up by 13% in the last year. In the last 12 months, fun has become cheaper in Japan and in the U.S. as well. So even as you work at your job this week, take care of your chores this weekend and help out your community in whatever way you see fit, take a moment and have a little fun. You never know, it could be more expensive tomorrow. 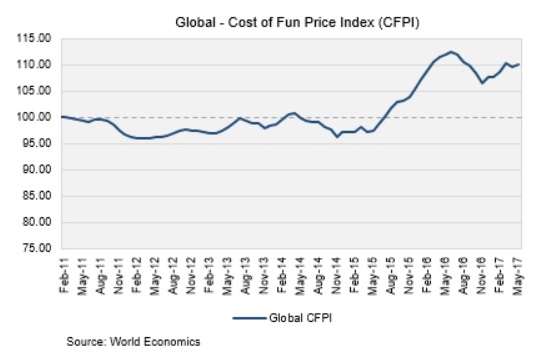 *though fun in Russia is cheaper in the last year–good times hacking into other countries apparently.

Germans Wore Grey, the End of Moore and the Spread of Intelligence The Economic Yin, the Three Body Problem Yang and India
Scroll to top