The most independent we ever felt was in our early, early twenties walking home from our job in Washington, D.C. to our new apartment, picking up a beer, crackers and cheese log. We sat on the floor of our apartment (we hadn’t yet purchased furniture), drank the beer and dipped the crackers into the cheese log while reading The Washington Post. The next night community inserted itself when we went to the old Hawk and Dove bar on Pennsylvania Avenue to watch the late and dearly missed Seattle Sonics play the Los Angeles Lakers in a playoff game (we had not yet bought a TV, the eventual purchase of which is a story in its own right) We got there early and found a seat at the bar. When the game started, the place was packed and we were literally the only person there rooting for the Sonics. The bartender took pity on us and gave us free drinks and food throughout the game. The Lakers fans gave us good natured hell. The Sonics lost but it was still a memorable night. Community and independence are like all things, a constant push and pull, each playing their part in the universe. This week we push you into the year’s most surprising statistic about China, pull you into world electricity data and wonder about community and independence when it comes to the number of countries in the world. It’s this week’s International Need to Know, the summer barbecue of international information, grilled to perfection with tasty side dishes.

Surprise is an underrated reaction. It is more often than not an edifying emotion and yet so often in today’s world we all want to pretend like we know everything and are never surprised by any news, development or event. This fall, the 19th National Congress of the Communist Party of China takes place in Beijing. China watchers everywhere have been keeping a close eye on events leading up to the meetings to get a sense of what’s going on behind the scenes of China’s leadership. We are too, but looking at the bigger picture just how important is any of this? We ask because we were surprised by a statistic in reading an interview this week with Professor David Goodman at the University of Sydney about how little things change despite seemingly cataclysmic events. Dr. Goodman’s research shows that 84% of today’s elite in China are descendants of the elite from pre-1949. In other words, the Cultural Revolution, 70 years of communism, Deng Xiaoping’s reforms, the last 20 years of economic leaps forward–despite all of these seemingly huge changes, the usual suspects are still in charge. How does this happen? As Dr. Goodman notes, “strategies for self-preservation run deep…Imagine you were a local elite family in 1948. Wouldn’t you suggest that one son join the CCP and the other the Nationalist Party? If by chance you had no CCP links, wouldn’t you marry off your beautiful daughter to one of the incoming soldiers?” Perhaps the composition of the elite is fairly stable in most countries, though maybe the mechanisms for maintaining elite status are different. Nonetheless, Goodman’s was the most startling statistic we read this week and that’s in the midst of a rather startling seven days.

One of the challenges of confronting climate change is that the world is not static. Even as more and more renewables come on line, more and more electricity is being used.  That’s partly because there are still lots of people in the world without electricity (see pie chart 1 below) but that number is falling (see chart 2 below). The number of people in South Asia without electricity has fallen from 581 million twenty years ago to 328 million today.  Worrisomely, sub-Saharan Africa actually has more people without electricity today than in 1994. But worldwide more and more people can now use electric toothbrushes. India has the most people without electricity followed by Nigeria, Ethiopia and Bangladesh. Take care of those four countries and half the problem is solved. Take care of those four countries by using coal, however, and we’ve got another problem. Fortunately, India is engaged in a robust solar energy program. “The cost of electricity from solar photovoltaic (PV) is currently a quarter of what it was in 2009 and is set to fall another 66% by 2040. That means, a dollar will buy 2.3 times as much solar energy in 2040 than it does today.” There’s your ray of sunshine for the day. 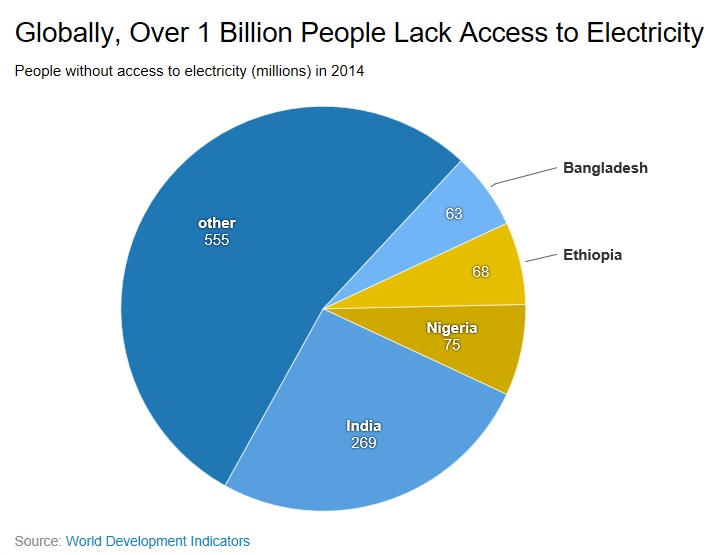 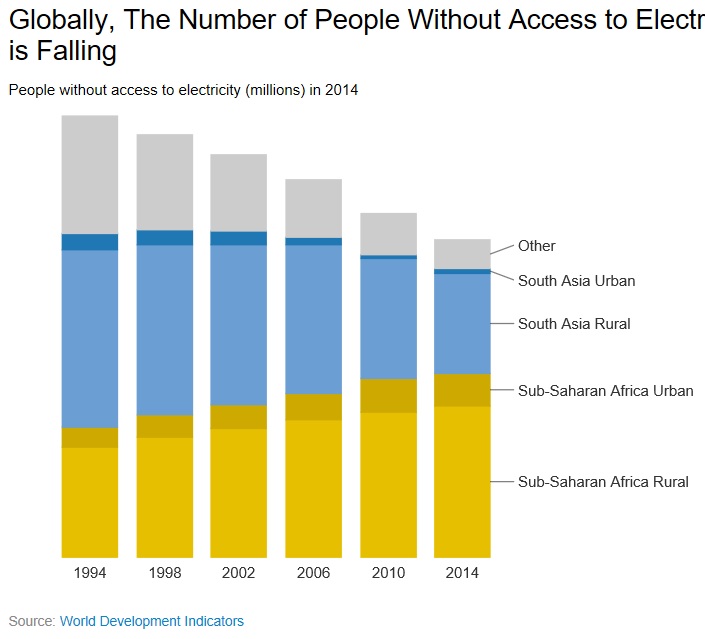 The Risk Game Board Changes

There are just over 190 countries in the world today. It may seem there have always been so many countries but not that long ago there were far fewer as we were reminded by this economic paper in VoxEU. In 1820, you would have found 125 countries comprising a Risk game board had it already been invented. That number fell to 54 at the outset of World War I in 1914, increasing to 76 by 1949. And then countries proliferated to the nearly 200 we have today. The paper argues this is related to globalization, trade and pressures these two trends created. We’re all for crediting globalization and trade for all kinds of phenomena but these economists are neglecting a whole raft of political events, including decolonization, the end of empires and other trends and events that probably had more to do with the increase in countries than trade and globalization. Nonetheless, it’s important to remember that the world, including the number of countries, is likely to look different tomorrow. Of course, the elites will still be the same but they may live in fewer countries. 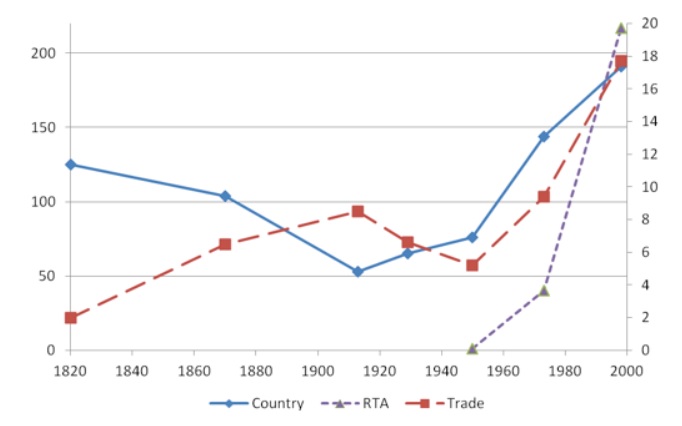 Anti-Corruption in China, ASEAN Low Debt, Walking and Talking Do exports limit food poisoning, an Oily World and What People Worry About
Scroll to top