Seattle is hot this week. Not Seattle-hot where Seattleites complain it’s 80 degrees and the rest of the country snickers. No, it’s in the mid to high 90s and may reach triple digits. A legitimate heatwave. Making it more difficult, most people do not have air conditioning. Making it personally difficult, the International Need to Know Spouse (INTNS) has been angling for central air conditioning for many months which we have resisted by arguing we would only use it a few days each year. This week’s heatwave has caused some additional heat in our household and led us to jerry-rig an air conditioner into one of the bedroom’s sliding windows, restoring temporary peace into the world. If only peace were so easily achieved around the rest of the globe. But as we sip a cold beverage we take a cool look at how exports are making food safer in China, examine why oil prices will remain lukewarm and turn up the heat on which countries are worried about which threats. It’s this week’s International Need to Know, enjoying the dog days of August by casting eagle eyes around the globe.

The other day we ate some cherries that had been sitting out at the market for quite some time. Not only did we not get sick but they were quite tasty, more than likely because they were world renowned Washington State cherries. People have not had such confidence in Chinese food and you’ve probably seen news stories documenting food safety problems there. It turns out, according to Food Navigator Asia, that food exports from China are safer than food sold domestically in China. This makes sense, if these exporters are to compete in markets internationally, they would have to match standards in those countries. China is taking that basic fact and using it to make domestic food production safer. China’s Certification and Accreditation Administration launched a program last year to encourage Chinese food companies “to bring the same production processes used for exporter goods to those sold locally.” The program has attracted more than 1,500 brands and resulted in US$1.4 billion worth of export-quality food products being sold domestically in China, at least according to the CAA. That’s a start. More than 20,000 companies in China export food and agricultural products to more than 180 countries. We always assumed the food safety issue in China would be solved. If you think we’re worried about eating Chinese imports, think about the Chinese who have to deal with the problem every day.

As we predicted over a year ago (we just sprained our hand patting our own back), oil prices have remained moderate. We still assume, though there could be fluctuations in the short to mid-term, that oil prices long-term are on a steady downward slope. That’s partly because of increasing use of substitutes (i.e. electric vehicles) over the coming years but also because of new technology that has allowed new production of oil to come online (which may, in the short run, dampen the substitutes). As you see in the chart below, world crude oil reserves have been going up since 2004. Investment in new oil and gas activity fell in 2016 as prices fell so perhaps there will be a tightening of supply and demand, but supply seems to be coming online in shorter cycles than in the past so a large increase in oil prices, absent some large external event, still seems unlikely. Enjoy your cheap drives this summer and prepare for cheaper, cleaner drives five to ten years from now. 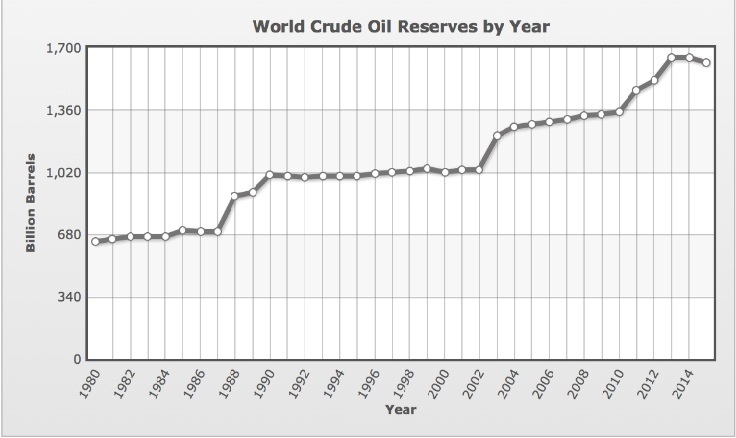 Flight or Fight Depending Where You Live

We are a world of worrywarts. But we don’t all worry about the same things and our worries, like our tastes in music and movies, evolve over time. What we were worried about twenty years ago is different than what we worry about today. 100 years ago, people tracked wolf attacks in France (big wolf data of its time), which back then were not uncommon and quite worrisome. Today, although there are certainly wolves in sheep’s clothing, we aren’t so concerned about bites. A new Pew Global poll shows that instead the world’s top worries are ISIS, cyberattacks and climate change. But who worries most about these things depends on who you are. Parts of Europe, the Middle East and the U.S. view ISIS as the top threat. In Latin America and Africa, they are more likely to view climate change as the top threat. Cyberattacks are the number one concern in Japan. The poll also delved into worries about the influence of China, Russia and the U.S. Around a third of people view these countries with alarm. The Asia Pacific region is most concerned about China, the Middle East about the U.S. and Europe about Russia. For those who are concerned most about the global economy, it is mainly countries whose economies are in distress such as Venezuela and Greece. Where you live determines what you fear, for better or worse. 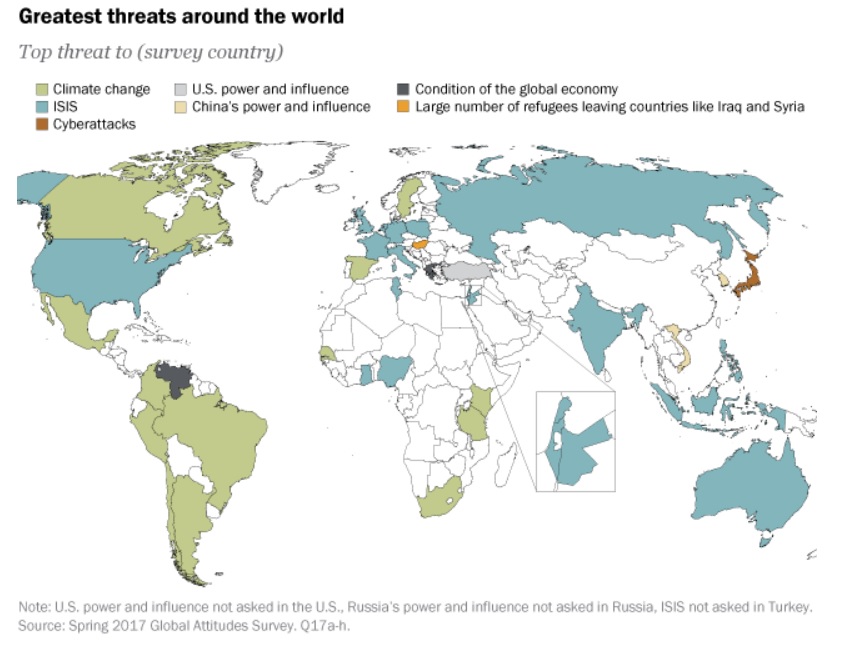