ESPN is dead. Maybe not Dickens doorknob dead but at least JK Rowling’s Professor Binns the ghost at Hogwarts dead. We are an NBA fan and as we were about to leave our office earlier this week we glanced at Twitter (the world’s fourth worst invention) and saw the news of the trade of Kyrie Irving to the Boston Celtics. We clicked on a link that brought us to three writers from The Ringer website discussing the trade on Facebook Live. Unlike a couple of years ago, it never occurred to us to turn on ESPN or to even go to their website. There has been lots written over the last year about ESPN’s financial slowdown and now we experienced personally what is happening to the company. Indeed to all television companies. Television is dying too. Ironically this may ultimately mean if not the death of, then a slowdown in professional athletes salaries. Or will sports leagues be able to squeeze out large revenue streams from Facebook and other entities? As we await the answer to that question we inquire into the battle of innovation and censorship in China, answer where the African millionaires are and interrogate who publishes the most books. It’s this week’s International Need to Know, providing international wisdom and data on any medium that will have us.

China In With Innovation, Out with Ideas

If China was a romantic relationship, it would be the one you tell your friends is complicated.  The question is can a country with so many contradictions continue its economic success or will it break up in an angry economic divorce? We are no Dr. Phil but early last year we noted that China does not get enough credit for being innovative, that too many people still think China merely copies what others are doing. This week brought more evidence of China’s innovation in an article by the always interesting Connie Chan outlining the 16 ways QR codes are being used in China. The Chinese use QR codes for pet tags, sharing bikes and even providing more information about pandas. QR codes are used far more in China than in the United States. At the same time, however, China’s government continues to crack down on the free flow of ideas. Innovation is built off of ideas and if one does not have access to them, well, then innovation may be in trouble. The most recent example is the attempt to force Cambridge’s China Quarterly to remove 300 articles that the Chinese government deemed offensive. At first, Cambridge caved but then later in the week decided they would not remove the articles. Now China Quarterly is inaccessible in China. An enterprising programmer scanned the articles in question and created the word chart below to give a sense of what China’s government is scared of. 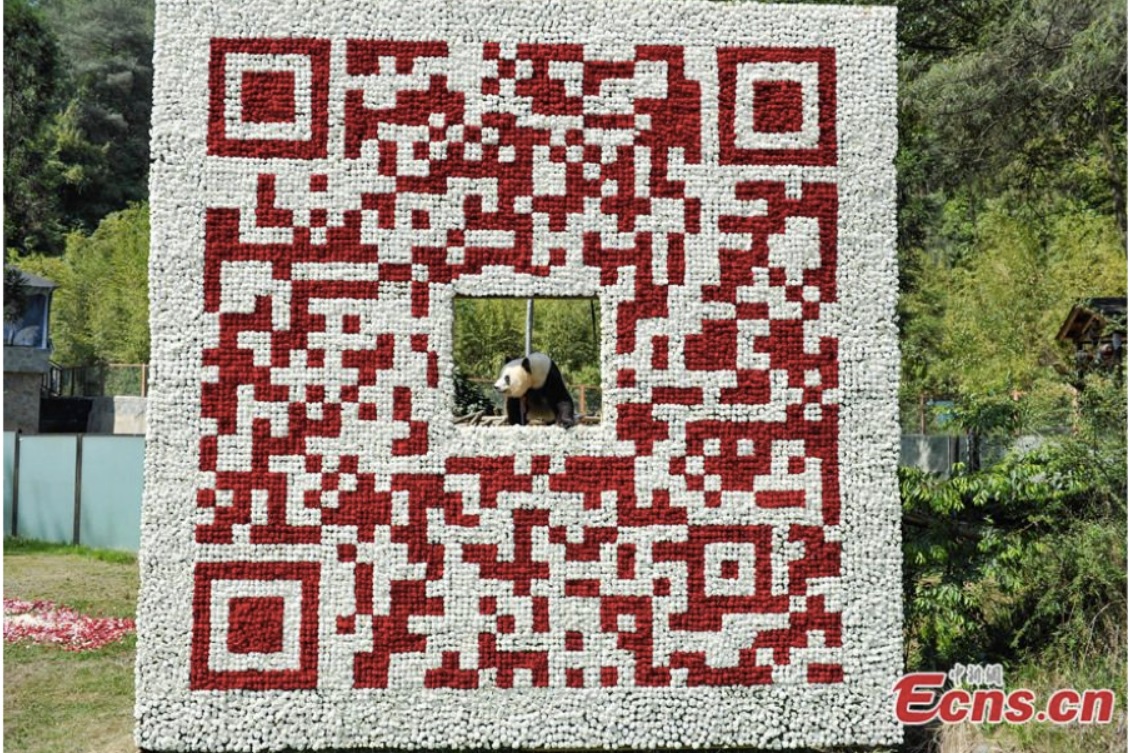 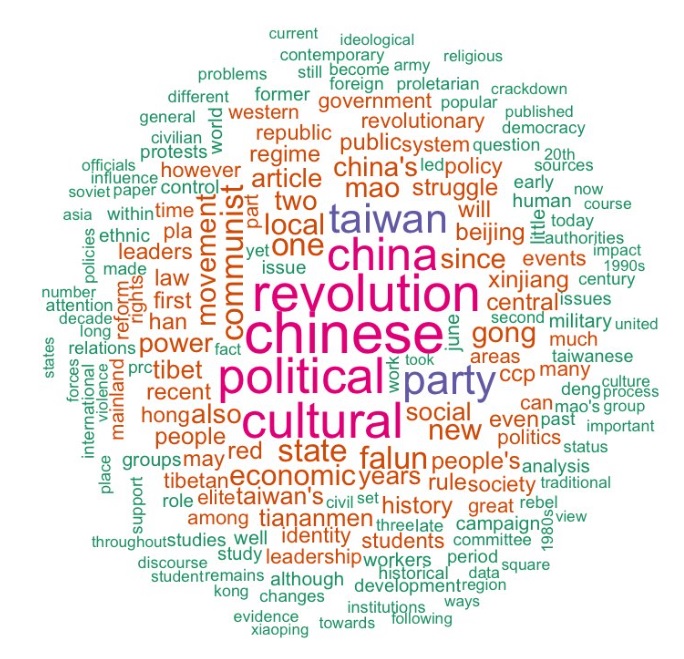 Where are the African Millionaires?

Where are the Bruce Waynes of Africa? It is rare to see a story about African millionaires–other stories tend to dominate coverage of that large and diverse continent. But we recently saw a graph of which African countries are home to the most millionaires. Unsurprisingly, South Africa is number one with 40,400 millionaires, followed by Egypt, Nigeria and Kenya. Nigeria, of course, is home not just to millionaires but also to the billionaire Aliko Dangote who is trying to buy the British football club Arsenal so he can fire its coach (sports team buying billionaires no matter the continent have similar personalities). Mauritius, which is classified as Africa although it is 1200 miles off the mainland, last year had the fastest growing rate of millionaires. On the actual mainland, the countries with the largest increase in millionaires in Africa are Ethiopia, Rwanda (bet you didn’t guess that one), Uganda and Kenya. However, last year saw an overall 2 percent decrease of millionaires in Africa. This is a continent in which a bit more income inequality, or at least a larger increase of millionaires, might be seen as a helpful sign for economic growth for Africa as a whole. 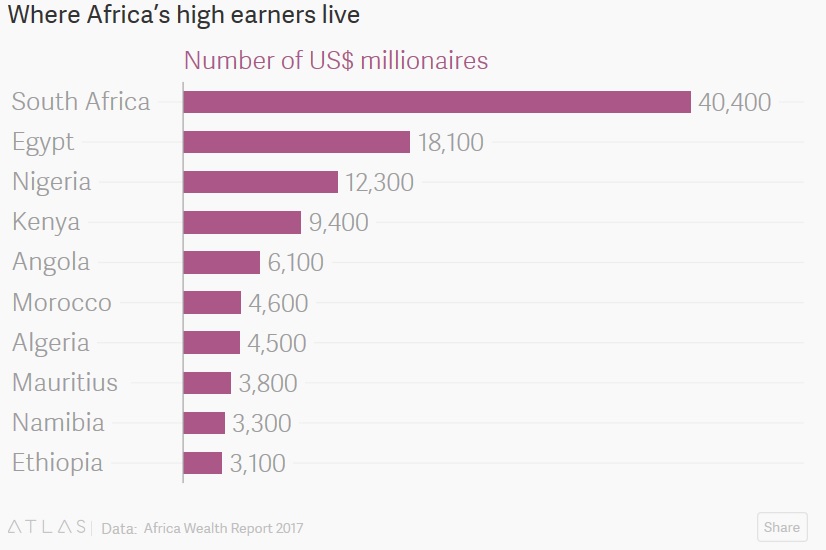 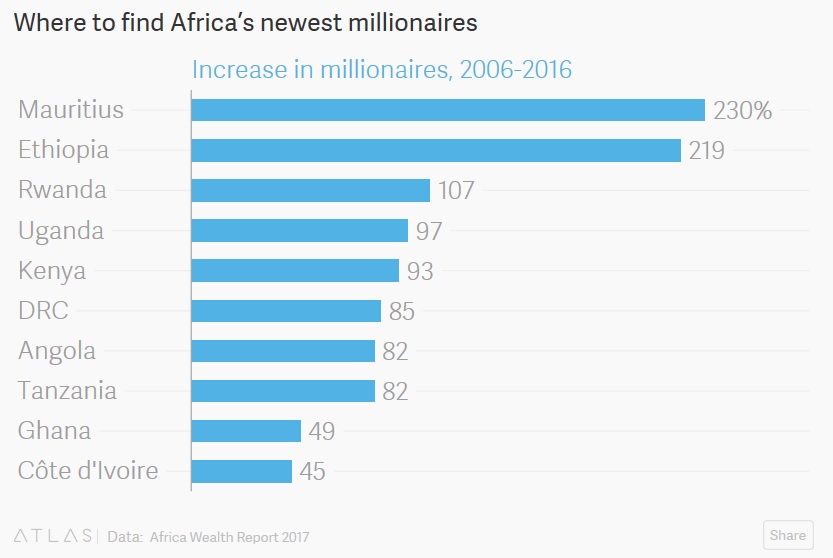 Who Publishes the Most Books?

Did you get through your summer reading? Made it through that beach book while relaxing this August (we’re nearly through with Anna Karenina–Russian authors are not a happy lot so thank goodness for summer sunshine to leaven the sadness)? The International Publishers Association (IPA–there should be a book themed beer, it has a hint of mustiness and yellow-sheaved paper) recently released global publishing stats. No surprise that China and the U.S. are the two largest publishers of books in the world as you see in the chart below. They are followed by the UK, France and Germany. China, of course, is a large country so no surprise they would publish lots of books. But perhaps a more interesting insight is books published per capita. In that statistical slice (see chart below), the UK, Iceland and Denmark (the happiest country in the world–coincidence?) rank as the top three. China ranks far down the list, even below Bosnia and Herzegovina. 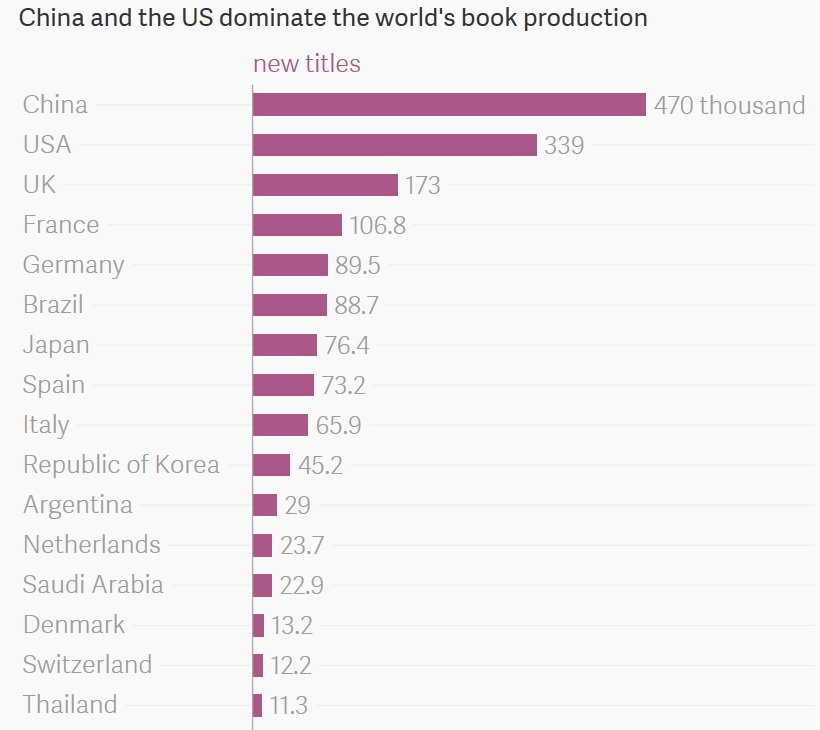 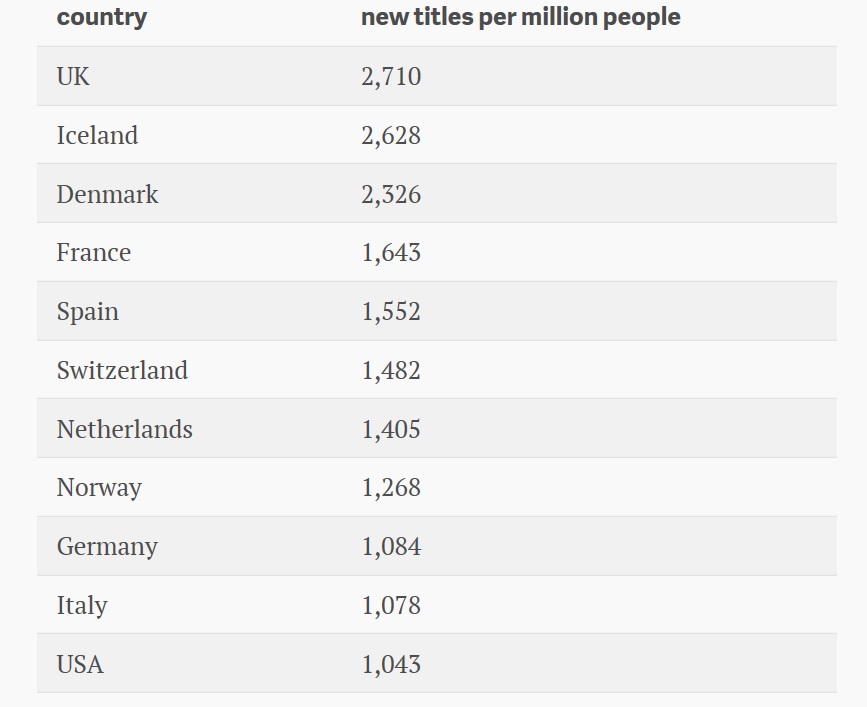