There is a theory of the end of the universe that eventually all matter and energy will evolve toward a state of inert uniformity. Everything in the universe will be the same forever and ever. We were reminded of this when Marginal Revolution pointed us to a new paper that posits it is getting harder and harder to generate new ideas. Are we entering the human equivalent of an inert universe–no more development, very few new ideas? The paper notes that “Across a broad range of case studies at various levels of disaggregation, we find that ideas–and in particular the exponential growth they imply–are getting harder and harder to find.” In other words, the iPhone X may be as good as it gets and it’s really no improvement over past iPhones, or Galaxies for that matter. Perhaps we are entering a new dark age of innovation, a modern medieval lack of progression. We have no idea if the paper is correct or even if it is if we’re just on a temporary bridge of notion nothingness about to cross into a lush jungle of new ideas. But even as we search for LED light bulbs above our head, we present an idea of why Germany was less economically shocked by China, why a small country feeds so many of us and why today’s terror attacks scare more people. It’s this week’s International Need to Know, energized to bring you international data and information that matters.

Depending on the study, the U.S. either lost lots of jobs to China or the effects were fairly localized (but almost all the studies agree that any loss of jobs to China is in the past). Either way, Germany appears to not have been affected as much by the rise of China. Why is that? According to a new study it is because of three reasons: a) the opening of Eastern Europe exposed Germany to trade adjustments previous to China’s rise–by the time China was becoming a dominant exporter, Germany’s adjustments had already taken place for low wage competitors; b) the development of Eastern Europe provided Germany new export markets which balanced out new competition from China; and c) Germany’s penchant for high quality products insulated them a bit from Chinese competition. The paper is relatively convincing but we should remember that Germany is facing the same rate of manufacturing job loss as other countries as we pointed out many months ago (albeit starting from an initial higher level). We re-post the graph below as a reminder.

BTW, in the chart you can see the steep decline in German manufacturing jobs from 1991 (when the Soviet Union fell) to 1997.

The United States has long been the breadbasket to the world (horrifying gluten-deniers the world over we guess). But the second-largest exporter of agricultural products might surprise you. It’s not a large geographical sized country like China, Russia or India. It’s the relatively small Netherlands. The Netherlands exports $94 billion worth of agricultural products despite being only the 131st largest country in terms of land area. This country continues its long international trading tradition but now as agricultural exporters–they are the largest exporters of potatoes and onions, and second-largest exporter of vegetables overall. In fact, according to National Geographic, “More than a third of all global trade in vegetable seeds originates in the Netherlands.” The enterprising country has accomplished this through technology and efficiency. The Netherland’s devotes more than half the nation’s land area to agriculture and horticulture. In addition, as National Geographic notes, “Banks of what appear to be gargantuan mirrors stretch across the countryside, glinting when the sun shines and glowing with eerie interior light when night falls. They are Holland’s extraordinary greenhouse complexes, some of them covering 175 acres.” With the world’s population continuing to increase, at least for now, we’re fortunate that Netherland’s scientists and leaders are also working to export their agricultural methods to other countries.

No, Really, Things are Not That Bad

In our continuing bid to remind people (including ourselves) that things are not as bad as we think, we present the latest data on terrorism deaths in Europe. You’re probably thinking that’s not a very cheery topic but look at the chart below. Yes, terrorism deaths in Europe spiked the last two years (though so far 2017 is trending less deadly) but deaths by terrorism are still well below the level of the 1970s and 80s. But, who is doing the killing has changed. And today’s ubiquitous media means terrorist attacks get an all encompassing, 24-hour, stories on every media platform treatment. These two changes might be why people today are feeling more, well, terrorized, than they once did. But, really we are much safer today than we were 30 years ago. Now, we should not be complacent, each year villains have more access to more powerful weapons (we’re writing a whole novel about this), but at least for the moment, the world is safer than it was in the broad lapel 70s and steep shoulder pad 80s (hey, fashion might be better too!). 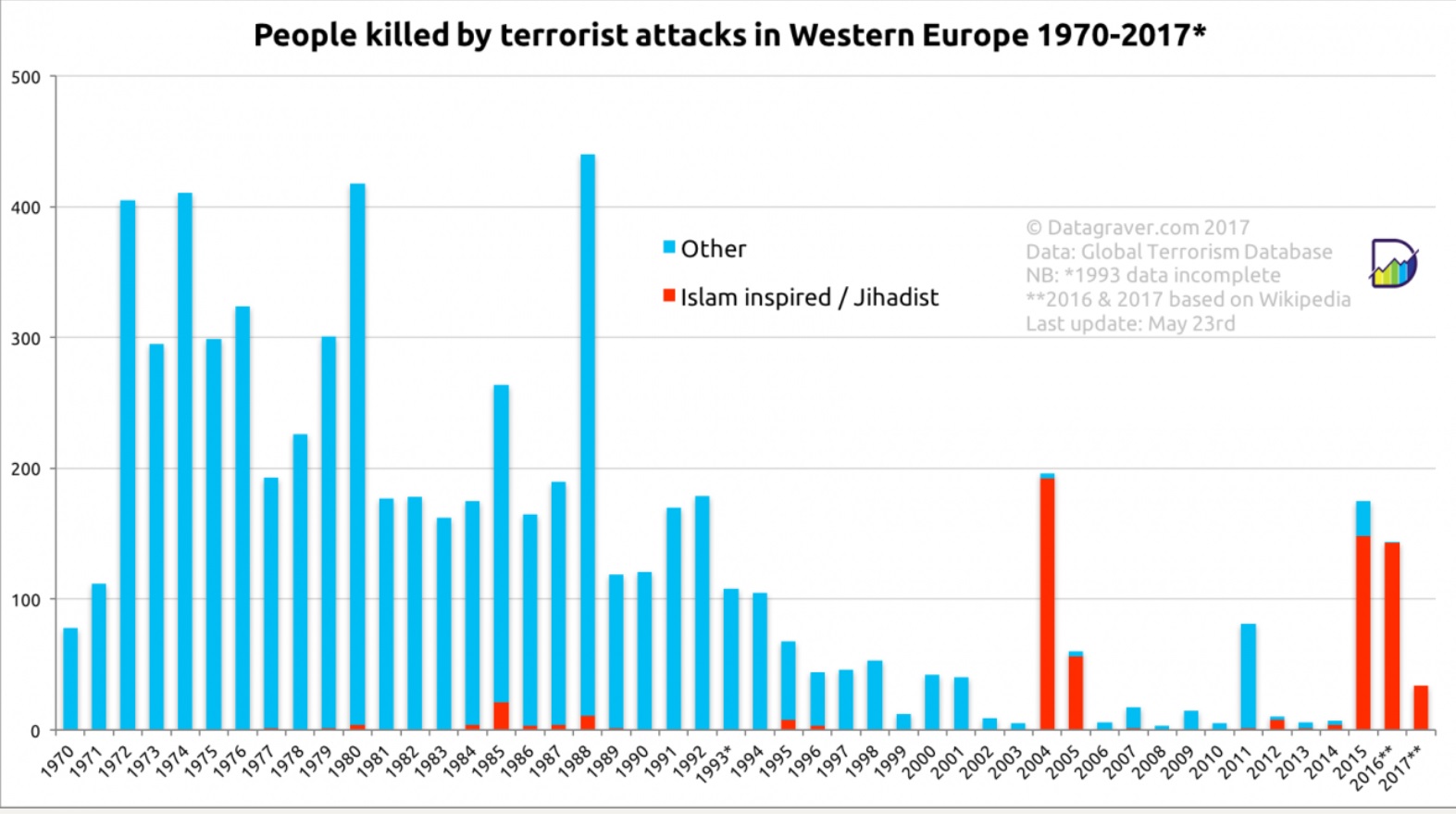