National anthem posture is capturing all the attention but news far more impactful for the future of American football emerged this week. Scientists now believe they can diagnose chronic traumatic encephalopathy (CTE) in living people where before one could only know that someone had the disease by doing an autopsy. But if doctors will be able to test for CTE in living football players, and if CTE is as prevalent in players as autopsy data indicates, then isn’t American football in big trouble? In the future won’t part of your teenage football players routine physical include testing for CTE? If the test indicates they have CTE, presumably the player would not be cleared to play high school football, or later college football or after that in the NFL. It’s one thing for we fans to push to the corner stories of players determined to have CTE after they die. It’s another for parents, friends, doctors, coaches and fans to confront living athletes we root for who have been diagnosed with CTE. At the least, athletes at a younger age would turn to other sports diluting the talent in football. Of course, sports such as soccer and hockey are also vulnerable to the CTE plague (ironically the fake sport of wrestling is especially prone to the real health problem of CTE). Obviously this means cricket will be the dominant sport of the future. In the meantime we take a knee to examine more closely the rural-urban divide in China, who uses tax havens the most and the emergence of renewable energy in, well, emerging economies. It’s this week’s International Need to Know taking headers for the goal of international knowledge and data.

In elections in the UK (Brexit), the U.S., Germany and elsewhere we have seen rural and urban populations vote very differently. China doesn’t have democratic elections but it too has a rural-urban divide. The massive migration from rural to urban in China helped lead to the largest reduction in poverty in world history. But even today, a large percentage of the Chinese population is rural, impoverished, and as an article in Science makes clear, has a huge education deficit. More than 70 million Chinese still live on $1 per day. That’s far fewer than 20 years ago but still a lot of people. More worrisome is the lack of education in rural communities. According to Science, “a third or more of rural kids don’t complete junior high school in China.” The article also points out that “many parents who migrate leave children behind in poverty who tend to leave school early, eat poorly and have little cognitive stimulation in the first years of their lives.” This leads to lower IQ scores among rural Chinese students. Scott Rozelle of Stanford calculates that when including “poor, neglected urban children, 400 million future working age Chinese are in danger of becoming cognitively handicapped.” And they will live in an age that will demand more mental acuity not less. China recognizes the problem and is trying to take steps to improve the situation. If they don’t succeed, they will have a challenge making the leap from mid-income country status to high income. More on this next week.

Who Uses Tax Havens the Most

You may remember a couple of years ago when the Panama Papers leaked information about offshore wealth of a variety of leaders, dictators and wealthy miscreants. A new economic paper goes beyond leaks and tries to quantify which countries’ wealthy are most prone to storing their wealth overseas. As you see in the graph below, it is a who’s who of badly run countries, corrupt countries and oil wealthy countries, in some cases all at once. The UAE, somewhat surprisingly to us, tops the list with Emiratis overseas wealth totaling over 70% of the countries GDP. Next comes that ode to socialism, Venezuela, and then everyone’s (or at least the current U.S. President’s) favorite world troublemaker, Russia. The paper estimates that overall about 10% of the world’s wealth is stored in offshore accounts. There are, of course, many sound reasons for someone to store their wealth offshore but which countries wealthy are most prone to storing their wealth outside the country can also be telling. The researchers also used this data to recalculate inequality in countries since previous research focused on tax records and it is likely the wealthy have found ways to evade such taxes, including by storing wealth offshore. They find that when including such data “Offshore wealth has a larger effect on inequality in the U.K., Spain, and France, where, by our estimates, 30%–40% of all the wealth of the 0.01% richest households is held abroad. It has dramatic implications in Russia, where the majority of wealth at the top is held outside of the country.” Technology and globalism has made capital more fluid. It’s likely we’ll see offshore wealth increase in the coming years with effects both good and bad. 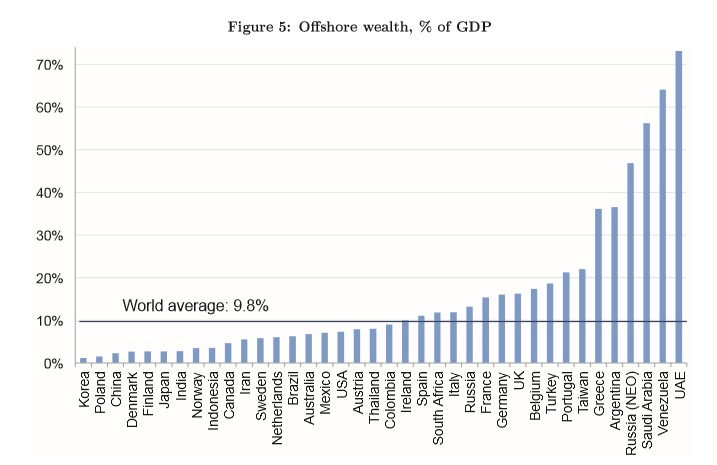 Climate Continues to Improve for RenewablesDespite policy headwinds in the U.S, the climate for renewables continues to improve. Moody’s Investors Services has a new report out showing that decreasing prices for renewable energy generation, and crucially also for storage, are driving the market and propelling emerging and developing markets into the lead. The head researcher on the report, Swami Venkataraman, reports that “Emerging markets are a key market for growth in renewables, with countries such as China and India leading the charge as new renewables become competitive with other sources of power even in developing nations.” Moody’s research shows that developing countries now have total installed solar capacity of 272 GW and wind capacity of 307 GW which is 53% and 51% respectively of total world capacity. China by its sheer size but also by its aggressiveness in this sector, accounts for a big share of this capacity, but Moody’s notes that Latin America and the Middle East are both rapidly increasing their capacity. The progress in storage is perhaps most important. Venkataraman notes that “benchmarks in storage projected for 2020 have already been reached.” As we have noted before, we are headed for a cleaner world regardless of current policy debates.