Last year for a client we interviewed a variety of small companies regarding their challenges and opportunities in doing business. It was remarkable how many of them commented on the difficulties they faced in competing with large companies. And not natural differences stemming from economies of scale but rather from rent seeking that has been unfairly built into our regulatory and legal systems. So we recently read with interest and focus the most important book of 2017, The Captured Economy: How the powerful enrich themselves, slow down growth and increase inequality* by the libertarian leaning economist Brink Lindsey and the politically liberal Steve Teles (theirs is not a partisan treatise, both parties are guilty in not addressing the central problems outlined in the book). The Captured Economy details–using data, case studies and anecdotes–how rent seeking is out of control in the United States, at all levels of government–federal, state and local. It explains how and why the finance industry has become too large a part of our economy, why doctors, lawyers and dentists are so expensive and why it costs too much to buy a house or rent an apartment. It explains how rent seeking is a large reason for the increasing income inequality in our country. One hopes political leaders of all stripes, at all levels of government, will read the book, absorb its lessons and apply them. We hope you, dear readers (some of whom are political leaders yourselves) will too. The issues and solutions outlined in this book are among the top four most important facing our country. So even as we work to become part of the one percent without the benefit of rent seeking, we present more information on automations effect around the world, examine restrictions on social media globally and continue our efforts to remind people of good news. It’s this week’s International Need to Know, switching the channel from CBS Morning News to the Today Show–er, uh, turning on the radio to NPR–oh crap, we give up.

*Our PhD thesis is an examination of the steady lengthening of book’s subtitles.**

**The subtitle of our thesis is too long to print here.

Automations Effect Around the World

Last week we linked to a report predicting that in 40 years all jobs will be taken over by robots. Perhaps, but even if this does not occur, continued automation of certain jobs will take place over the coming years. Which countries will be most effected? McKinsey attempts to quantify this in an update to an earlier report on automation. It states that China is at risk for the most people losing jobs to automation between now and 2030 with 102 million Chinese workers predicted to lose jobs to automation during that time period. But that’s partly a function of China’s size. When looking at percentage of workforce, Japan sees the largest job loss, followed by Germany and the U.S. Japan is at risk of 46% of their workforce losing jobs to automation. This is a startling number but salved somewhat by the fact that Japan’s overall workforce is shrinking due to aging demographics. McKinsey speculates that with new job category creations, Japan may not suffer as badly as that 46% figure indicates. Nonetheless, unless automation creates huge increases in productivity (GDP, as we have noted before, increases only through growth of working age population and increases in productivity), Japan is likely to continue to have slow GDP growth. And most countries will face economic adjustments due to automation over the next decade.

The Freedom of Social Media

So we confess: We miss the golden age of blogs and mourn the advent of social media. We are no Luddite but we wonder if social media, so far, is a net negative for humanity. Nonetheless, we also take note of where social media is free and where it is heavily governed, via a new report from Freedom House.  According to the freedom monitoring organization, “Online content manipulation contributed to a seventh consecutive year of overall decline in internet freedom, along with a rise in disruptions to mobile internet service and increases in physical and technical attacks on human rights defenders and independent media.” Freedom House notes, of course, Russia’s efforts at information manipulation, including in the U.S. election, but also reports that the number of governments attempting to manipulate information online has steadily increased since they began monitoring the phenomenon in 2009. “Venezuela, the Philippines, and Turkey were among 30 countries where governments were found to employ armies of ‘opinion shapers’ to spread government views, drive particular agendas, and counter government critics on social media.” The attacks are not all virtual: “The number of countries that featured physical reprisals for online speech increased by 50 percent over the past year–from 20 to 30 of the countries assessed.”There’s a reason why free speech is the first amendment. 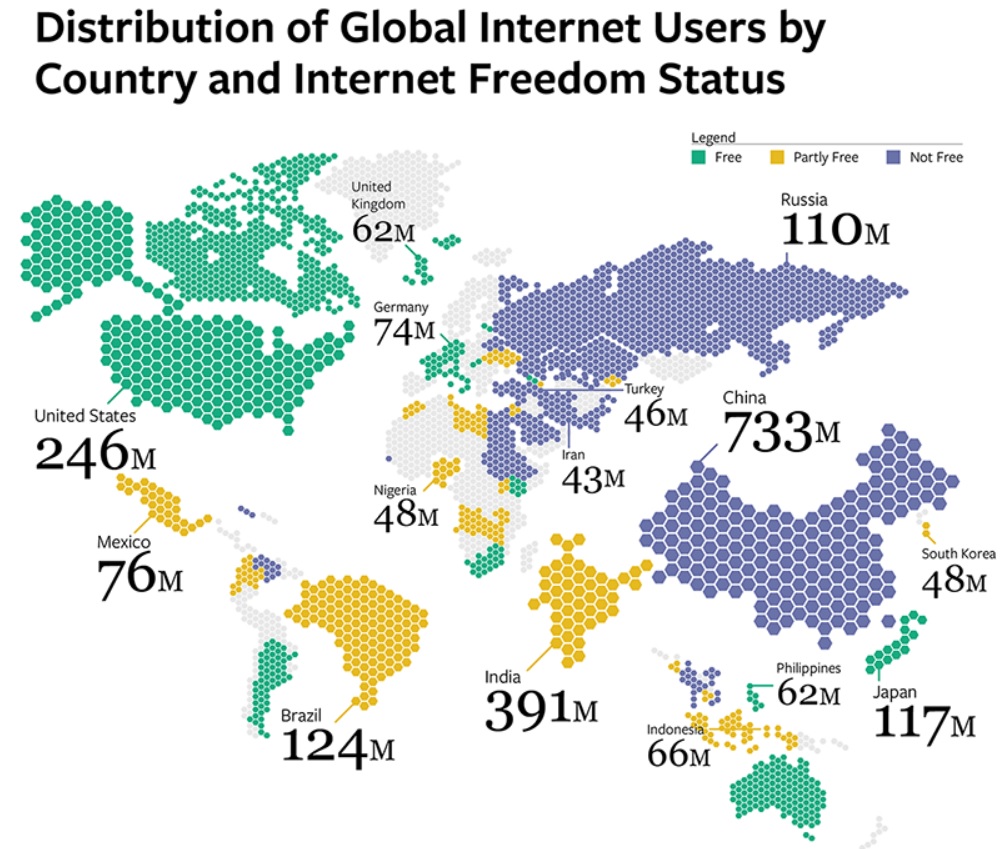 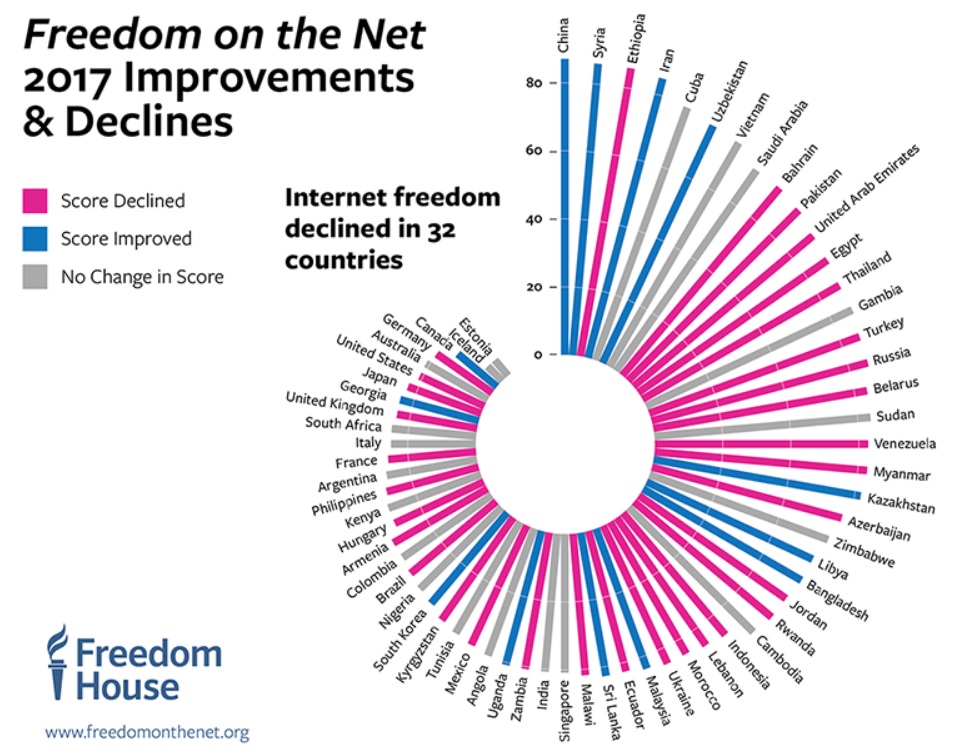 In our continuing attempts to remind ourselves that the world is on the whole continuing to get better (despite the news in the two previous stories!), we point to the latest data on child mortality estimates from the World Bank released earlier this week. This data shows that “between 1990 and 2016, the global under-five mortality rate dropped by 56 percent.” Not too shabby. In fact, the last decade has seen more progress in decreasing child mortality than the previous decade. We are doing better and better. Of course, there is more work to do as still even now 15,000 children die every day. And some places are doing better than others. More than 80 percent of global under-five deaths occur in just two regions–Sub-Saharan Africa and South Asia. The second chart below shows the countries with the highest child mortality rates–Somalia tops the dubious list–and those with the lowest–Iceland!  But even admitting there is more work to do, we should note our darn good progress. 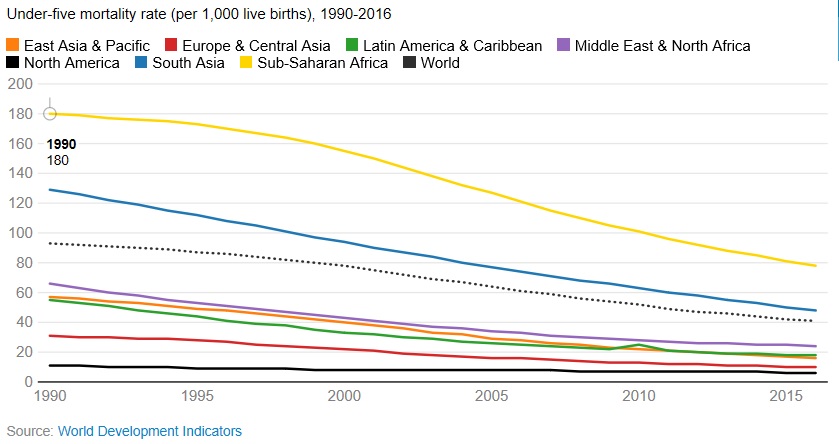 Rise of the Robots, Brexiting the UK, Sexual Violence Stats Chinese Wages, State of Carbon & is Life Better or Worse?
Scroll to top