We’ve long wondered how cats planned to subvert humankind and complete their take over of the world. They’ve made a good start by conning us into feeding them, massaging them and playing with them with fake mice and feathers attached to sticks at their whim. But now they are fully implementing their devious and cruel plan with the game, CryptoKitties, which was released on November 28th on one of the more popular blockchain cryptocurrencies, Ethereum (second largest after Bitcoin). The game, which involves the trading and breeding of virtual cats, has seen $6.6 million spent on these felines since its launch. The average cat costs $130. However, the most expensive virtual feline went for $117,712. The Engineering and Technology website reports that the creation of new virtual cats will cease–the spaying and neutering of the cryptocurrency–next November to “prevent runaway inflation.” The inevitable backlash has begun, however, leading to perhaps the greatest headline of the year: “Service dog causes chaos at ‘Cats’ performance.” Yes, a service dog escaped its owner during the performance, rushed the stage and attacked one of the performers pretending to be a cat. A spokesperson for the musical told the New York Post that “in the storied history of ‘Cats’, this is the first time one of the actual cats was involved in an incident with a dog.” We are unsurprised that 2017, this year that has seen so much chaos and nonsense, would mark the beginning of the great cat uprising, and a rebellion against it. Meanwhile, as we attempt to monetize our two cats before November 2018, we examine the complexities that are China, look at the state of CO2 emissions and ask who thinks the world is better than fifty years ago. It’s this week’s International Need to Know, loyally like a dog bringing international news and data to you right to  your lap.

The tyranny of narrative is strong with China. Too many analysts want to tell one story–China is either an economy prepared to fall apart or an unstoppable machine. It is a land of copycats (ah, even in China the felines rise) or a hive of innovation. It is working to fill the leadership gap left by the U.S. vacuum or is an authoritarian state setting a bad example for international trade and investment norms. If we were more accurate and honest in our test giving on any issue, including China, “All of the above” should be the most frequent answer. So we turn to a few different aspects of China as we head to towards the end of the year. First, is an interesting article in the South China Morning Post claiming that wages are falling in China save for a few professions: “monthly salaries dropped 16 per cent to 4,014 yuan this year, according to the recruitment website Zhaopin.com.” The article also notes that nearly 8 million students will graduate university this summer (the population of Switzerland), and these students continue to be attracted to first tier cities such as Beijing and Shanghai (where housing costs continue to increase). At the same time, one of the professions where wages continue to increase in China is in artificial intelligence, a sector we have noted previously China is betting big on. The UK website The Register notes how important real time translation, powered by progress in AI, is to China. “While it looks to foreigners like a monolithic language and culture, Chinese encompasses a range of generally-not-mutually-intelligible dialects.” The article asserts that AI-powered language translation is thus even more important to China. China’s complexity will drive its innovation, but its political system and regulation of the Internet may retard that innovation, its GDP may grow, but its society struggles with inequality. It’s a complex place.

We have talked in this space about the possibility of peak oil usage and expressed some optimism, despite challenging U.S. politics around the issue, that progress will continue to be made in reducing climate change emissions. So in the interest of full disclosure we feel obligated to report that after three years of remaining flat, CO2 emissions will likely increase 2 percent by the end of this year over 2016, according to the Global Carbon Project. The developing world is the main reason for the increase, especially China’s increased use of coal in the last year. But there is still reason for hope. For example, as you see in the second chart below, the UK has decreased its carbon intensity (the amount of carbon released per energy generated) by 56% since 2013 (Carbexit is better than Brexit). On a larger scale, solar energy, as we first noted nearly two years ago, is on a Moore’s Law path with the amount of solar generation nearly doubling every two years (see third chart below). Pessimists note that even though the amount of solar energy generated is increasing, so too is the amount of energy consumption. But neither consumption, nor emissions, are increasing at anywhere close to the rate of the increase of clean energy generation. We expect within fifteen years that C02 emissions will have indeed peaked. This is likely too late to avoid very challenging effects from climate change but still better than what could have been. 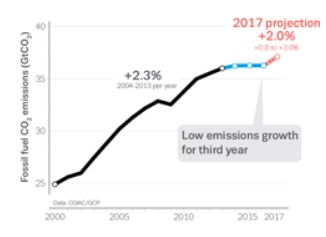 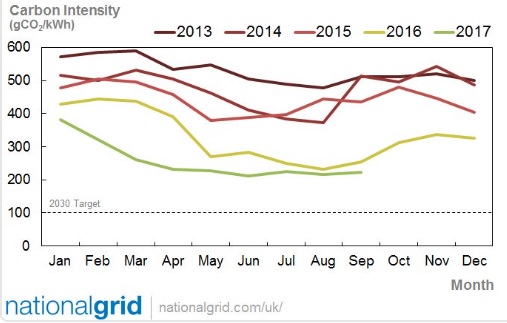 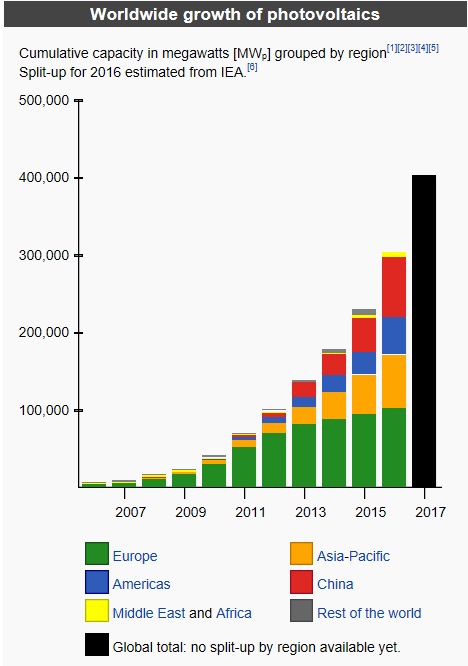 Is Life Better or Worse?

Is life better or worse in your country than it was fifty years ago? An intriguing question that the folks at Pew Global asked of “nearly 43,000 people in 38 countries” this year. Somewhat depressingly, barely over half of the countries populations reported life is better than it was fifty years ago with 20 countries saying it is better, 18 that it is worse. Of those 18 claiming life is worse today, we would estimate that perhaps only four can legitimately have that view. But it’s good to see through the dark tinted glasses that many view the world through. It is important to recognize the despair many feel. On the other side, Vietnamese top the list of those who think life is better today than 50 years ago with 88% of the population believing so. They are followed by India, South Korea, Japan and Germany, all of whom are very right to think things are better now. For example, in 1967, real GDP per capita in South Korea was about the same as North Korea’s. Let’s hope in 2067, when the world is ruled by machines,  most people will think life is better than today. 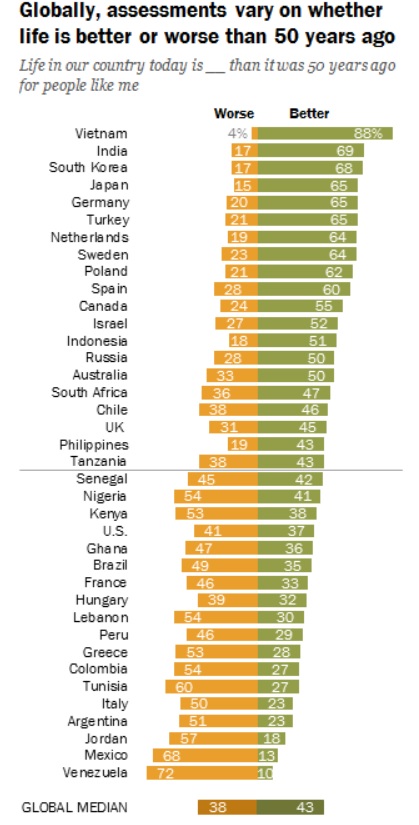 Automation’s Effect, Social Media and Good News Trickling Down to Authoritarians, Out Like Flynn, Virtual Singer Killed the...
Scroll to top