We return to you this week, if not triumphantly, then with a limp and a cane, from knee replacement surgery. We’ve learned many things over the last few weeks. Nurses tend to be angels, and physical therapists aren’t far behind, even when inflicting pain in you (all for a good cause, of course). Our tolerance for pain is not what it once was. Binge watching the British TV show Black Mirror while on pain killers can cause bad side effects. Los Angeles (we had the surgery at Cedar Sinai in that fair city) is definitely an industry town. We shared an Uber with an aspiring actress, eavesdropped on a conversation where someone said they’d been on the red carpet but aspired to get on someone’s private jet, and heard gossip about William Shatner from one of our nurses (you are right to like Spock better than Captain Kirk). But as some were and are distracted by celebrities, we shake the stardust from our eyes and look at the Long Run, analyze innovative Shenzhen and gaze up at where the tallest buildings are. It’s this week’s International Need to Know, providing full range of motion to the world of ideas even as we can still only bend our knee 65 degrees.

In the Long Run

Everything we know is wrong, or at least some days it seems that way. We’d always been told that over the long run, housing prices increase at the rate of inflation. Sure there are housing booms (our town of Seattle is currently in an epic one) but over 20, 30, 40 years, there is a regression to the inflation mean. But now a new study comes along that not only asserts this is not true but that in the long run housing is the investment with the highest rate of return, including over stocks. And by long term, we mean dating back to 1870, the first year analyzed in the study from economists at UC Davis, the University of Bonn and Deutsche Bundesbank. The research paper analyzed the rate of returns of “treasury bills, treasury bonds, equities (what? no pork belly futures?) and residential housing from 1870 – 2015 for 16 now rich countries such as the U.S., Germany, and Japan. Housing’s annual average rate of return for that period is 7.05 percent while equities was 6.89 percent. This was not true for each of the 16 countries which in some cases saw equities have a higher rate of return than housing, but overall it was, leading the paper’s authors to conclude that investors should “hold an internationally diversified portfolio of real estate holdings, even more so than equities.” Sell your bitcoins and buy another house. 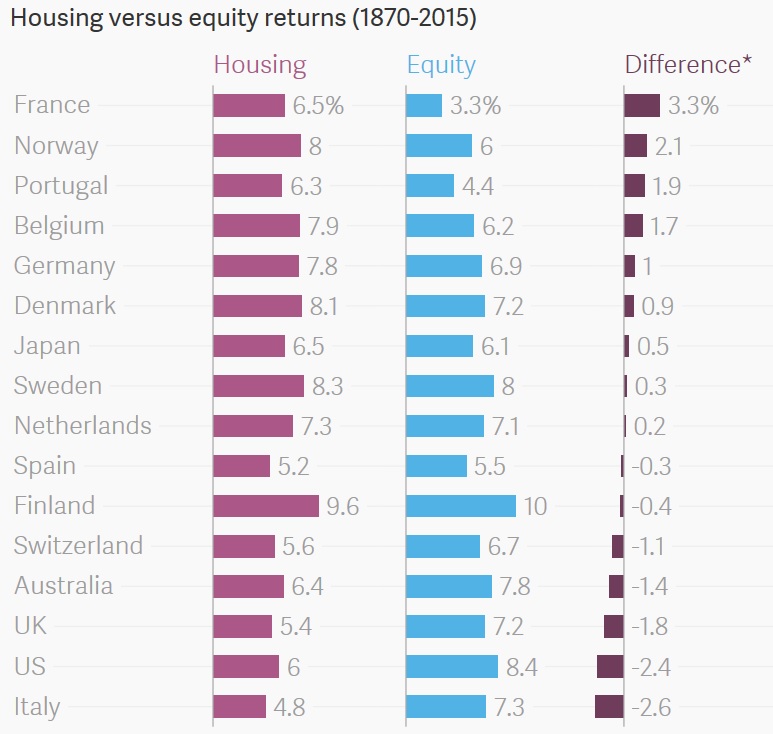 Shenzhen is one of our favorite cities in China and as we have noted before, one of China’s hubs of innovation. This week brings two more pieces of evidence of the latter. First, is the report that by the end of last year, Shenzhen had electrified all of its buses. And being a Chinese city, Shenzhen is huge, which means they had a lot of buses to electrify; in fact, more than 16,000 buses which is more than America’s top five bus fleets combined. They did this, of course, to lessen pollution problems in the city. How Shenzhen is generating electricity to power those buses we’re not sure but we’re guessing coal plays a large role. Even so, it’s an impressive feat and another sign of the city’s forward thinking and innovative nature. So too is the fact that of the 4600 companies attending this week’s CES consumer electronics show conference in Las Vegas, 10% of them will be companies with the word “Shenzhen” in their name. We assume that means those 450 companies are based in Shenzhen. It’s yet another sign of the technological innovation taking place in Shenzhen, and in China. 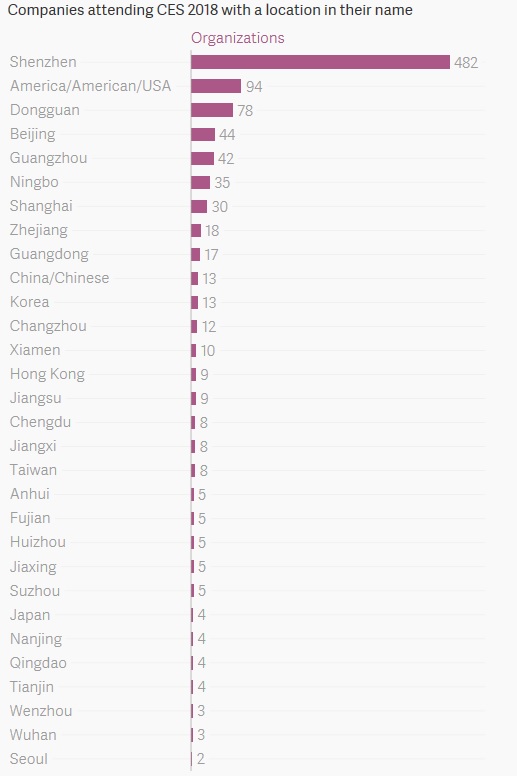 Ambition and ego go hand in hand and when mixed together well, they can create great things, just as the right combination of chocolate and peanut butter, gin and tonic and Andre 3000 and Big Boi lead to great cookies, drinks and music. Building super tall buildings is evidence of both ambition and ego and countries where they are being built are often dynamic ones, where things are happening and people are thriving. The United States in the early and mid 20th Century is a great example. China today is another. As you see in the chart below, China dominates in the number of super tall buildings being built. Of the 120 super tall buildings under construction, 69 of them are in China. The UAE and USA are distant seconds and thirds. Gaze upon the height of ego and ambition below and draw your own conclusions about the correlation between a country’s economic dynamism and the size of their buildings. 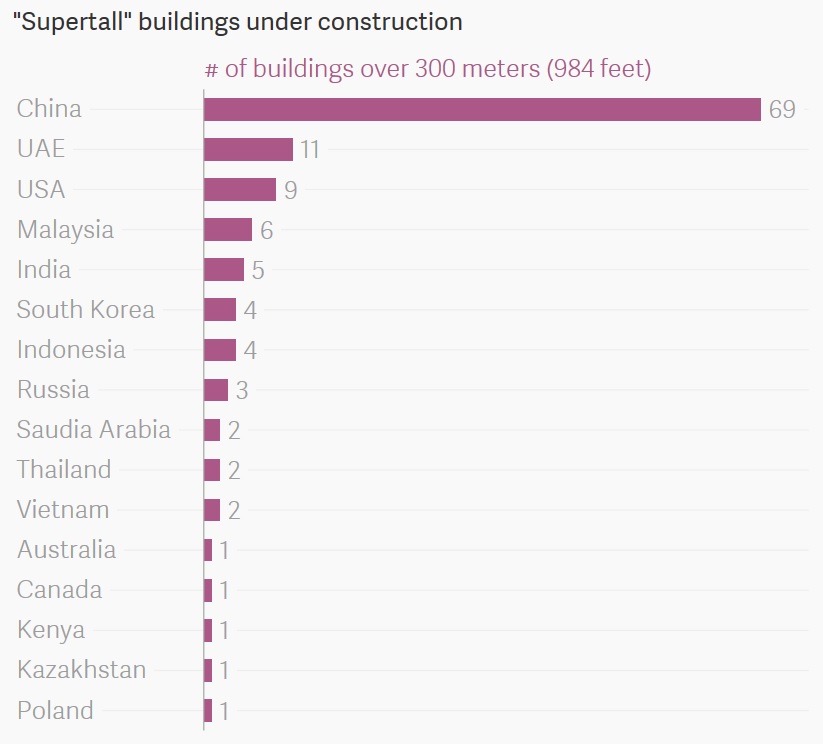 Trickling Down to Authoritarians, Out Like Flynn, Virtual Singer Killed the... Keep an Eye on Djibouti, Paying Immigrants to Leave, a Good Day
Scroll to top