During our knee surgery convalescence, we caught up on a fair amount of television, especially when we were on pain killers which dulled our ability to read. Pain killers also prevented us from creating a spreadsheet tracking the number of sexual harassers involved in the shows we were watching. We think and hope the number was small but certainly not zero. For instance, we caught up on the last two seasons of the masterful show, Silicon Valley (only one accused…so far)–to our mind the funniest, most spot on satire of recent years. In episode 7 of season 4, the legal rights of the song Walking on Sunshine by Katrina and the Waves plays an important role, with the allegation that Katrina–or perhaps it was the Waves, we’re not sure–ripped off the melody from an old Mexican song. Masterfully, at the end of the episode, a Mariachi version of Walking on Sunshine plays over the credits. And while we’d consider walking in front of oncoming traffic when the Katrina and the Waves song is played, this cover enchants us, which says something more bad about us than Katrina and the Waves. But we have nothing bad (yet) to say about surprising information out of Djibouti, remind ourselves about paying immigrants to go home and ask sincerely, “who is having a good day?”  It’s this week’s International Need to Know, providing, in the lingo of present day politics, a s***load of important information about our world, wherever and however we find it.

Keep an Eye on Djibouti

We begin this week with a question: which country is host to more countries’ foreign military bases than any other. The perhaps surprising answer is Djibouti, which like a moth to light, a Kardashian to a camera, has attracted military bases from eight different, diverse countries. The U.S., of course, has one there, as it does in over 70 countries around the world. Old time European power France has a base there and Italy is building one. But so too does China, placing its first foreign military base in a country that is strategically located near shipping lanes and bridging north Africa and the Middle East. Japan also has its only foreign military base in Djibouti. India is interested in building one and allegedly Djibouti is wooing Turkey to build one. The country is both hedging their bets and using the bases as an economic development play. China, always interested and active in Africa nowadays, has built a new electric rail line from neighboring Ethiopia to Djibouti—Ethiopian trade accounts for 70% of activity through Djibouti’s port, a significant portion involving China. It’s a tiny place and I bet you haven’t thought about Djibouti lately or perhaps at all. But the world’s powers are congregated there which could lead to mischief, fun and amusement, perhaps all at the same time.  A place to keep an eye on. 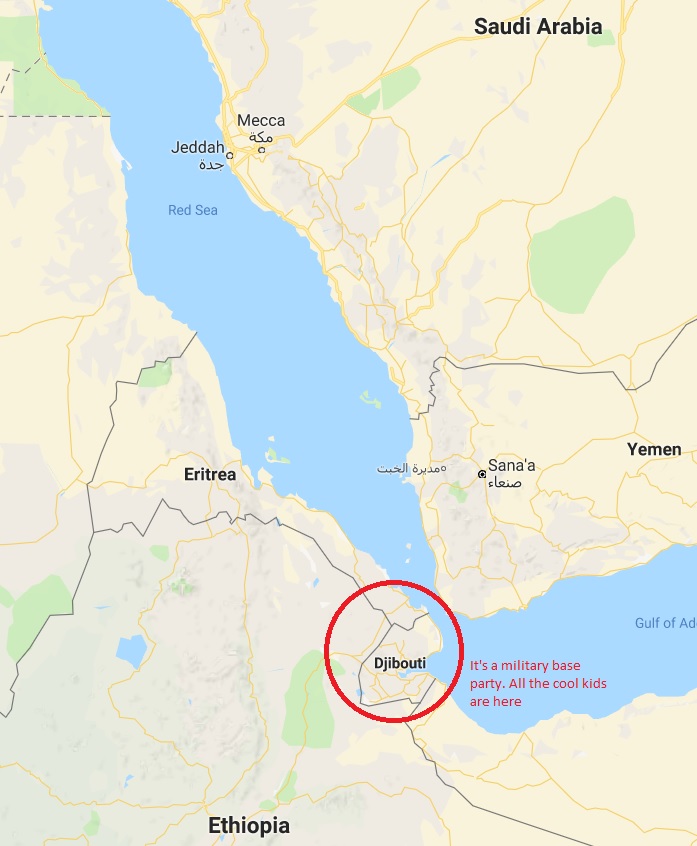 Paying the Immigrants to Leave

Fear is a powerful emotion. Immigration has sparked fears across the Western World, including in Europe. A week after our racist U.S. president continued to say racist things about immigrants, we came upon data comparing how much European nations are paying immigrants to return to their home countries.  Yes, perhaps like us you’ve forgotten that a variety of European nations have been offering moola for their recent immigrants to go home, or in some cases to help them pay the costs to return home. Sweden is offering the fattest checks, up to 3050 Euros to head out of their country and back to their countries of origin. Spain and the UK are tied for second at 2000 Euros each, with Finland and Germany rounding out the top five. The full list is below for your perusal, especially if you’re an immigrant yourself and examining where you can get the best deal.  However, not all European countries were offering such monetary assistance. The Czech Republic, for instance, offers no financial incentives. 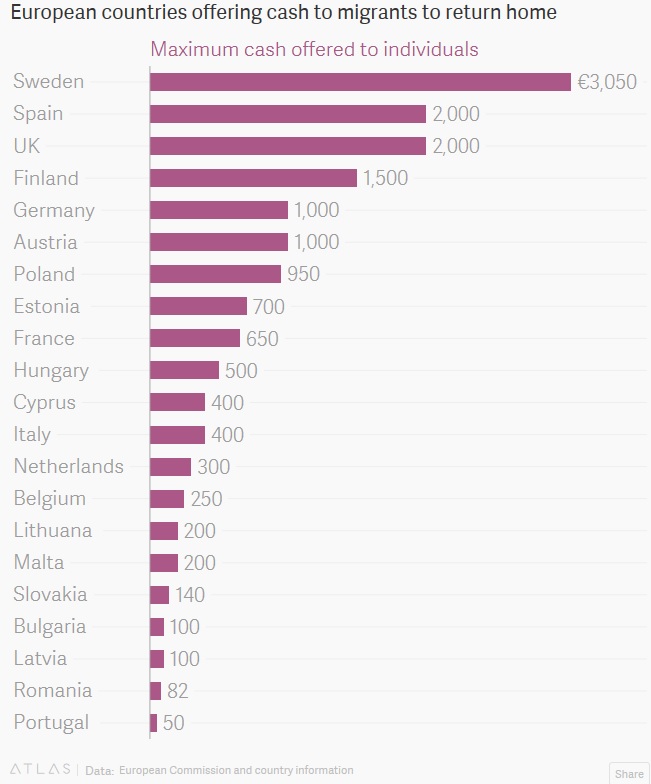 How is your day going so far? Well, we hope. If you are living in sub-Saharan Africa, Latin America or the United States, “you are more likely than people in other regions of the world to say you’re having a particularly good day,” according to a new survey conducted by Pew Global. Last year, Pew asked 42,000 people in 38 countries around the world, “How would you describe your day today – has it been a typical day, a particularly good day or a particularly bad day?” Nigerians were most likely to respond positively with 73 percent saying it was a good day. Colombians, Ghanaians and Brazilians were also particularly cheerful. Americans and Canadians are more likely to be having a good day than Europeans. Australians rate pretty low on good day responses, perhaps because they’re too busy saying “g’day.” 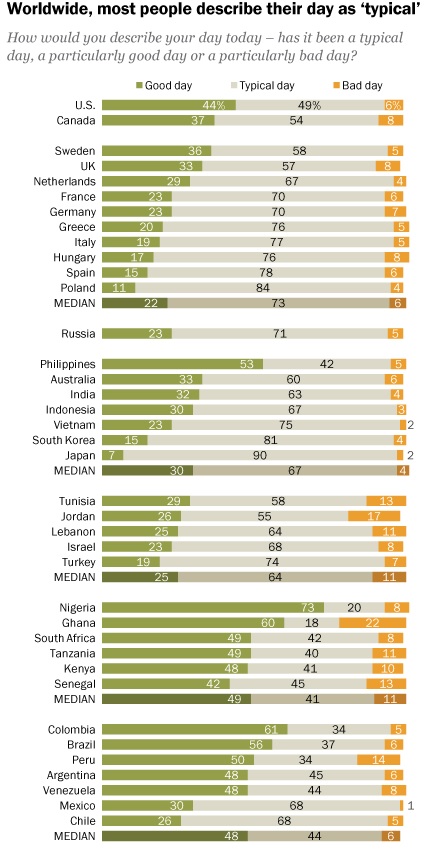