You may think you did not receive* your regular dose of INTN last week because we had our third knee surgery in three months. But surely you know we are made of sterner stuff than that. No, what prevented delivery of edifying, informative and important international news and data was the continuing technical problems we were having with our previous email delivery service. Yes, this week we have dipped our toes into the clean waters of a new company, Mailchimp, which you have probably heard advertise on what seems like every podcast ever. So far so good. We have taken the opportunity of this change to institute the slightest of redesigns. More changes may be coming. If you have any suggestions for additional redesign, or for that matter, content, or anything else, feel free to let us know. So, even as we eye fonts, colors and backgrounds, we chart the HALs of China, proclaim “let the women work” and revisit authoritarian views of democracy. It’s this week’s International Need to Know, the Southern District of New York of international information, raiding wherever and whomever we must to bring you our strange, fun and ever changing world.

Charting the HALs of China

As China continues to emerge on the world stage, and the U.S. vacillates between acting the star and stalking off stage to harangue the woman selling popcorn, there is increasingly an urge in some quarters to pit the two countries in a competition in every single sphere (we will discuss in future issues the trade and investment sphere). Perhaps no more than in progress in artificial intelligence. There is a fear among many that whoever achieves true AI first will rule the world. We expect it won’t work out that way, that science will progress differently than as depicted in a two-hour super hero movie, that multiple countries researching AI is a good thing, not a bad one. But nonetheless, we are gratified to present, via the former Mexico Ambassador to China, a comparison of the two countries AI progress in the table below. The only place China leads the U.S. currently is in collected data, which thanks to government efforts, companies such as Tencent, and a huge population, is enormous. BTW, Ambassador Guojardo’s twitter feed is full of informative and surprising information, presumably curated by the Ambassador himself and not by some AI bot. A second BTW, charting AI progress is particularly apt this week on the 50th anniversary of Stanley Kubrick’s remarkable 2001, A Space Odyssey. It is not our favorite movie of all time (though it ranks in our top twelve), but it’s probably one of the most important, prescient and impactful. 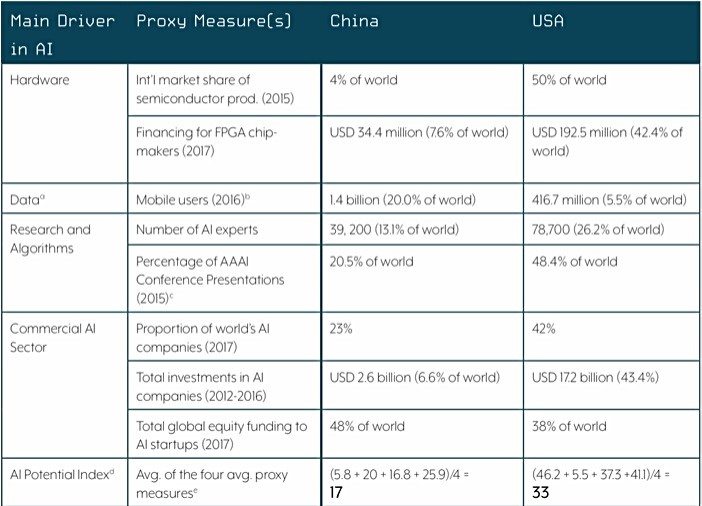