Years ago we were traveling overseas, Asia perhaps, though we don’t remember exactly where. We were looking at some postcards, when such communication beasts still existed. We saw one with a naked large man sitting on an enormous turtle. We bought it with the idea of mailing it to two friends who worked in the White House for the First Lady, a sort of experiment on whether a postcard with a naked man sitting on a turtle would make it through the White House gates. It did. Our two friends, we were told later, were standing in their office, trying to decipher my handwriting on the postcard (I have the world’s worst handwriting–not third or fourth worst, but the actual worst in the world), and chuckling at my postcard when the First Lady walked in and asked what they were reading. They showed her, and she laughed. And if memory serves, commented on my horrible handwriting. We cannot claim many things in this world, but we can say that Barbara Bush laughed at our postcard. RIP Mrs. Bush while we show how globalization is more than trade, lament that everyone in Venezuela is poor and chart the rise of EVs. It’s this week’s International Need to Know, denying that we are Michael Cohen’s fourth client even as we undress all the secrets of our world.

Globalization is More than Trade

We noted two years ago that international trade no longer grows as fast as GDP around the world. That does not necessarily mean that globalization is slowing down. Case in point is that housing prices in cities around the world are increasingly synchronized, at least in the largest, most prominent ones. As the IMF puts it, “for home prices in London, check the Tokyo listings.” The IMF recently presented data that shows “In recent decades, house prices around the world have shown a growing tendency to move in the same direction at the same time.” The IMF’s explanation for this new phenomenon (one we’ve noticed anecdotally in our own town with more and more international buyers of houses here in Seattle) includes institutional investors active in major cities, wealthy individuals buying  houses around the world and coordinated economic growth. The IMF concludes, “All of this suggests that house prices are starting to behave more like the prices of financial assets, such as stocks and bonds, which are influenced by investors elsewhere in the world. In countries that are more open to global capital flows, prices of both homes and equities tend to be more synchronized with global markets.” This is not necessarily a bad thing, though one wonders if it is making life more difficult for those struggling to buy their first house. At any rate, globalization continues to envelop many things, including housing. 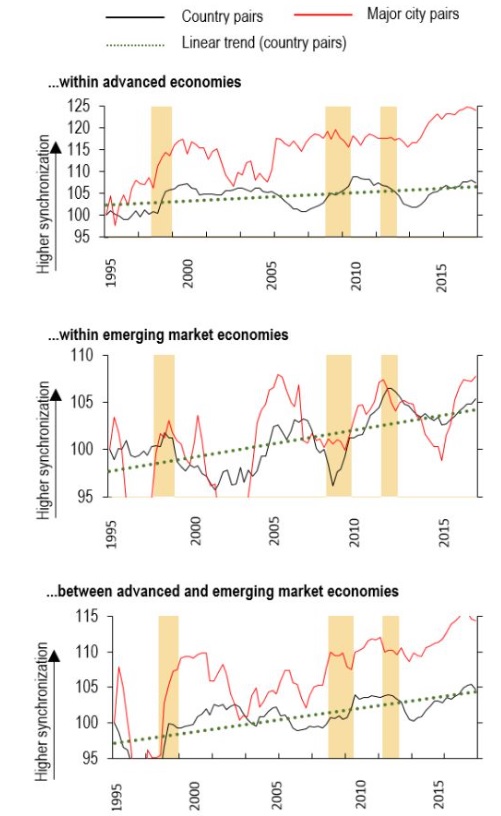 Everyone in Venezuela is Poor

It is easy to forget Venezuela in the midst of all the other tumult convulsing our world. But it’s worth reminding ourselves from time to time just how bad things have become there. Since 2014, a consortium of Venezuelan universities have conducted an annual survey of conditions on the ground in the country. This year’s, which came out a couple months ago, found that 9 out of 10 Venezuelans live in poverty. Nearly 60 percent live in extreme poverty.  In addition, the survey asked more than 6000 Venezuelans, “do you consider your family’s income enough to buy food to consume inside and outside the home?” The shocking answer is that 89.4 percent answered this question no. Buttressing this data is the fact that 64 percent of respondents reported losing an average of 22 pounds in the last year. And no, Venezuelan economic policies are not the answer to America’s obesity problem. Instead, Venezuela continues to offer stark warning lessons for other countries on how not to run a country.

More cars are sold in China than in the U.S. nowadays, a consequence of China’s larger population and continued economic growth. So it shouldn’t be surprising that the country is also driving the sale of electric vehicles, especially since the government is pushing for EVs to alleviate the air pollution problem. Colin Mckerracher of Bloomberg quantified the EV market in a recent tweet storm (if only certain presidents used Twitter so productively).  The estimate is that 1.6 million EVs will be sold in 2018, and in China full-on electric car sales are pulling ahead of hybrids. McKerracher notes that “There are now 14 countries where EVs were above 1% of total vehicle sales. Still small, but most countries cross over 2% around a year after crossing 1%.” There are increasingly a diversity of EV cars to choose from as the second chart shows. This will likely also help increase sales of EVs, as people have more choice of what type of EV to buy. We expect the percentage of EVs on the road to increase exponentially as the technology matures. 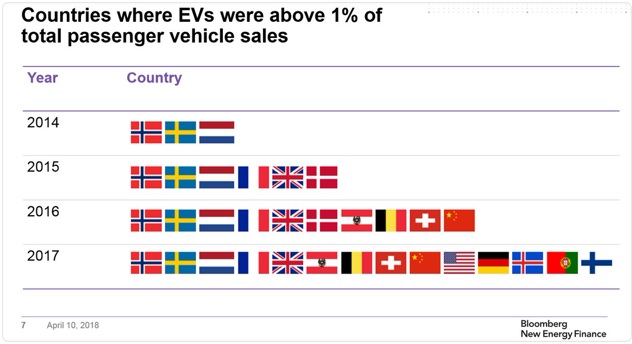 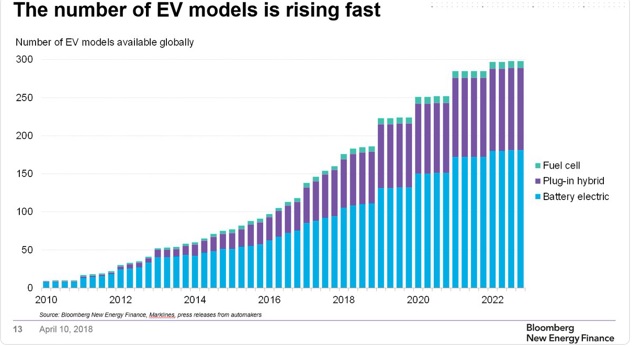