Memory is a funny thing. It is remarkably unreliable. We have a memory that we once met one of the Russian interpreters for Mikhail Gorbachev but for the life of us we don’t remember the circumstances. We think it may have been on one of our business trips to Russia many years ago. We are fairly certain the interpreter worked the Reykjavik Summit for Gorbachev when he and Reagan agreed to radically reduce nuclear armaments, but we have no memory of any stories the interpreter told us of Reykjavik, or anything else for that matter. This seems odd and makes us question whether we really did meet this person. There have been many studies that show eyewitnesses are notoriously unreliable. But so often we take eyewitness testimony as gospel. If I ever testify in a trial, don’t believe me, or at least verify what I say. It’s like the lyric from the song, Mr. E’s Beautiful Blues: “Don’t believe anyone and most of all don’t believe me.” What you can believe, however, is how coal has been hit in the Solar Plexus in India, AI medical progress in China and the surprising news about which countries are most inclusive. It’s this week’s International Need to Know, hoping to someday meet and talk with one of the two interpreters who worked the Helsinki summit.

Since practically the inception of INTN, we have pointed out the Moore’s Law-like increase of solar power generation. New data from India shows this trend continuing. You’ll notice in the chart below that solar generation nearly doubled from 2016 to 2018 (there was a blip reversal from 2014 to 2015).  You’ll also note that the generation of new coal plants are falling off a cliff. That’s because, as James Wimberely points out, “new solar can beat existing coal on price by 20%.” Even more important for the future, gains in storage efficiency and price continue to make remarkable progress: “With the rate of decline in battery prices, they will be competing directly with peakers [INTN: power plants for peak demand times] in a few years and beating them consistently by the mid-2020s. The energy revolution is in full swing even if not everyone is recognizing it. 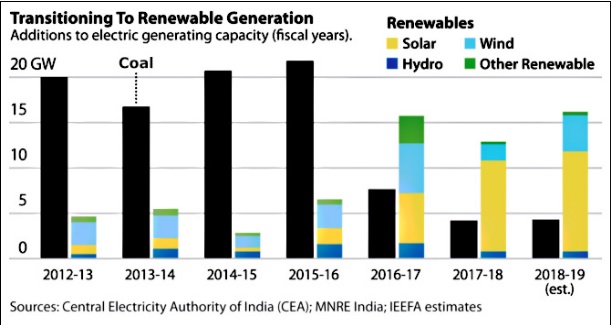 There is much fear mongering about China. China’s closed markets are a concern, as are its continued and deepening censorship. But fears of China’s rapidly developing AI capability are misplaced. The world’s economy is a bakery not the standard metaphorical pie. When China, or any other country, develops new technology it will benefit the world, not just themselves. We are not competing over finite slices of pie–the more bakers the more treats. Case in point is the joint ventureof a Singaporean tech company, Hanalytics, and China’s prestigious Tiantan Hospital that has developed a medical AI dubbed Biomind. “After months of deep learning, the machine was ready for a competition against 25 experienced doctors at Beijing’s China National Convention Center testing their ability to analyze images of the brain.” Spoiler alert, Biomind won. Quite easily. Biomind and the doctors competed both on detecting brain tumors in brain images and on images related to strokes. “When the results came in, Biomind beat the doctors squarely in both rounds. In round one, it correctly answered 87% of the questions, versus 66% for the doctors. In round two, it won by 83% to 63%.” The machines will only get better, more adaptable and able to do more medical procedures. Humans? We’ll still be running the medical equivalent of four minute miles. This will be a challenge for human employment but that would be the case whether AI is developed in China, the U.S. or Burkina Faso. 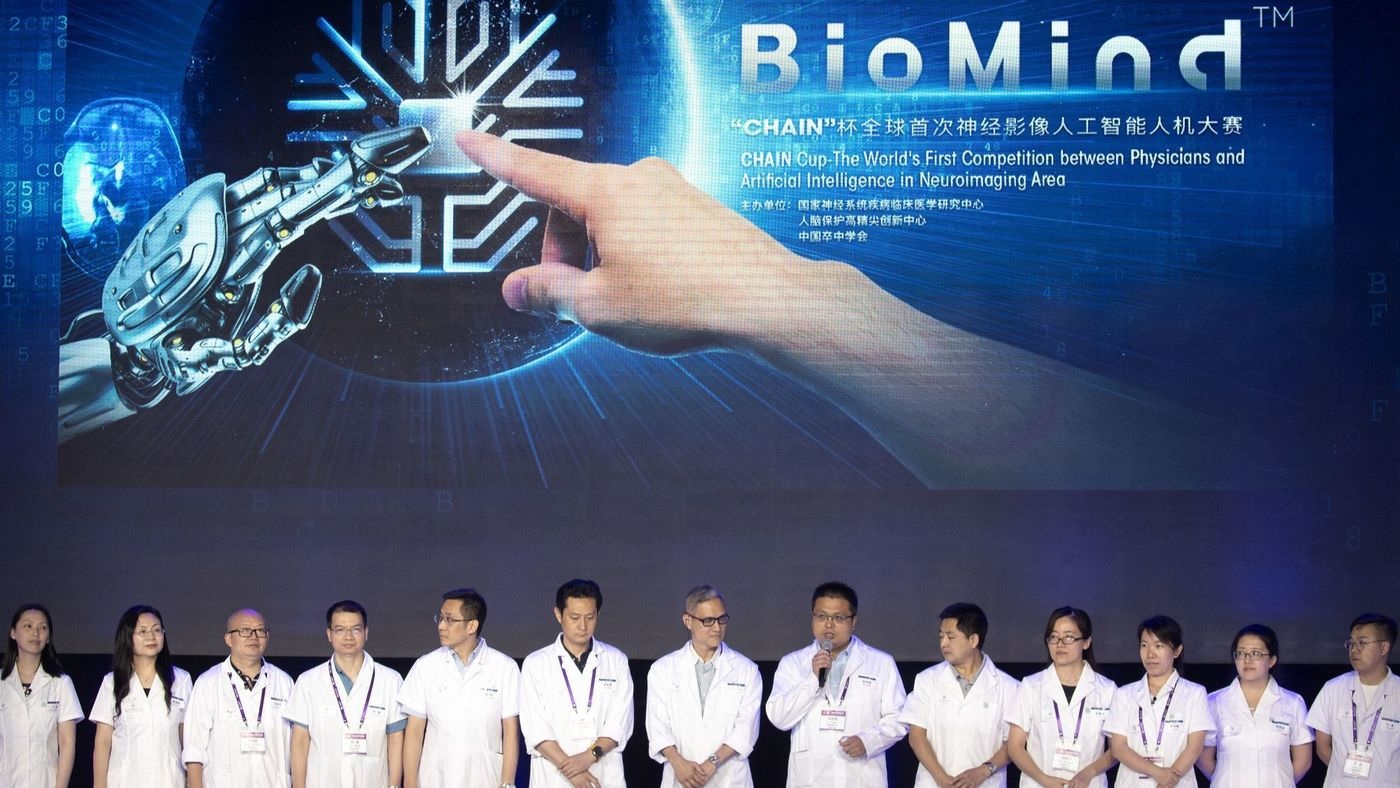 Who is Most Inclusive?

Immigration and border disputes around the world are illustrative of our seemingly divisive age. But even in today’s climate, some countries are more inclusive than others. It won’t surprise you that according to an annual IPSOS Global Advisor survey, Canada is the most inclusive country in the world. But you may be surprised, given recent developments, to see the United States ranked second. In fact, on the question on how accepting people are for naturalized citizens, the U.S. tops the rankings. The IPSOS index scores countries on inclusiveness “reflecting social acceptance of diversity as it applies to religion, immigration, sexual orientation and gender identity, political views, and criminal background.” They surveyed 20,000 people in 27 countries. Of these 27, and we’re not sure how they picked these three cubed number of countries, Saudi Arabia came in last, just behind Malaysia and Serbia. 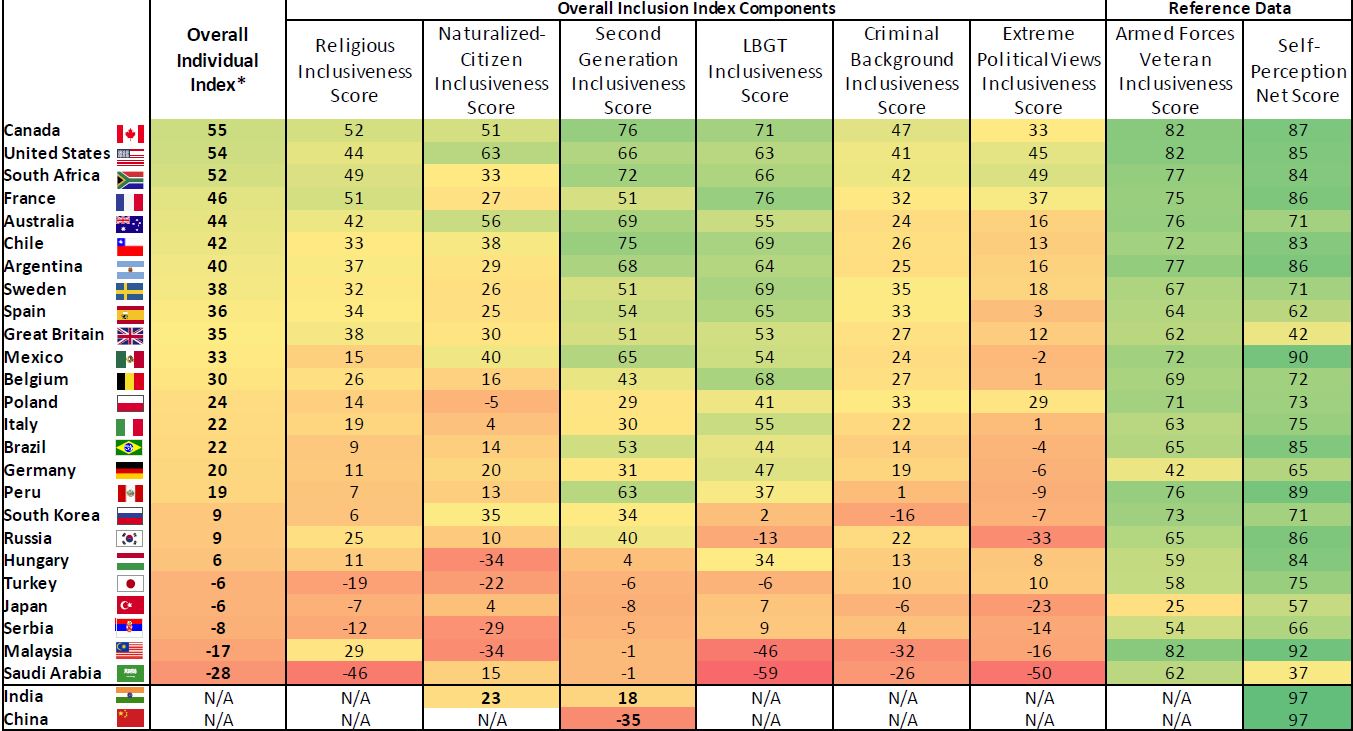 Mexico, Lead and Violence, Boxing Office China, Where is the Corruption The Life of Xi, World’s Most Underrated Country & Who Wants Self-Driving...
Scroll to top