We traveled on business to Eastern Washington state earlier this week. Because the area is sparsely populated, when we finished our dinner meeting we drove outside the small town to gaze at the star-lit sky, something usually obscured in city-lit Seattle. But nature, ever mysterious, hid the stars with a layer of clouds. It was a windy night and we patiently waited for the sky to reveal itself. Of course, nature is full of revelations, three of which we discovered over the last week when we learned spiders can fly, ants pass the mirror test and Panamanian monkeys can use tools. Wait, spiders can fly?!!! Yes, arachnophobes out there, spiders use the positively charged atmosphere and their negatively charged webs to fling themselves into the air, often traveling miles at a time. Are you frightened? Not nearly enough. And, yes, ants are one of only nine known animal species that recognize themselves in a mirror. And Panamanian monkeys have recently been discovered to use stones to smash nut shells. No word on whether an obelisk has been discovered in that part of Panama. So while humans distract themselves with short-term, inane distractions, political, cultural and otherwise, remember there’s a whole universe out there waiting to be understood better. And in that manner, as we await a break in the clouds, we present the real reason for Mexico’s elevated violence, insights from China’s box office, and where in the world there’s the most corruption.  It’s this week’s International Need to Know, closing our agape mouth whenever we are outside now that we know spiders can fly.

Andres Manuel Lopez Obrador won a relatively easy election for president in Mexico a few weeks ago. Mexicans want change, including and especially because of the crime and violence in the country. In fact, in declaring victory election night, AMLO (as he is known, which is a strange acronym for a politician to adopt–“Am low”—granted that’s in English, but still), said, “We are absolutely certain that this evil [corruption] is the principle cause of social inequality and of economic inequality,” he said. “Because of corruption, violence has erupted in our country.” We take no position on whether AMLO (it is easier to type than his full name!) will be a good or bad president, but in regards to crime we again remind ourselves of the role lead plays in the rise and fall of crime. Our go-to person on this is Kevin Drum who recently wrote, “Mexico didn’t start to phase out leaded gasoline until 1990, and average blood lead levels were at or above 15 μg/dl until then, especially in rural areas… Mexico…had a generation of kids born as late as 2000 with BLLs this high. The fact that violence is endemic 18 years later is no big surprise. In another decade, things should be a lot better.” We predict a decade from now, when violent crime is way down in Mexico, there will be many claiming credit, including possibly AMLO, but not enough attention will be paid to the elimination of lead from the environment as the cause. 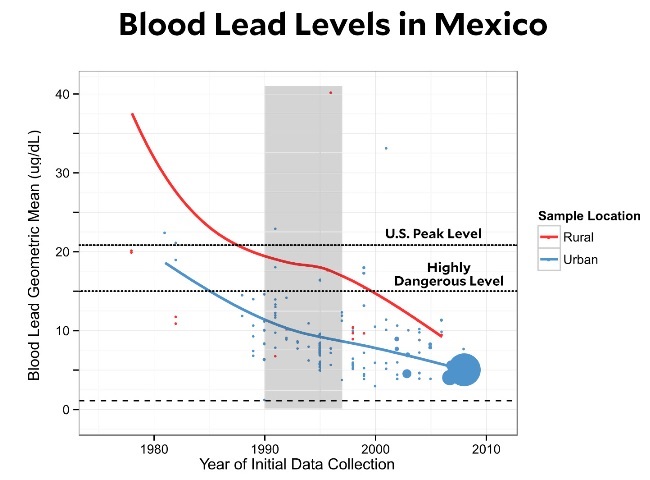 The cultural trends in movies used to be a good barometer for a country. That’s changed a bit with the explosion of other media, but two recent developments in China’s cinema are still worth taking note of and perhaps illustrative of its challenges as it continues to step up to the top rung of influential countries. Last week, Chinese authorities called for the capping of movie stars’ salaries: “The salaries of on-screen performers should be capped at 40% of the total production costs, according to a joint notice from five government agencies. Leading actors should receive no more than 70% of total wages for the cast, according to the announcement, published in Xinhua.” The unintended consequences of this directive will be fascinating to watch play out: Scene 1: a fancy house with an actor lying by the pool. She gets off the phone with her agent who has negotiated a contract that works around the pay restrictions. And, cut. Scene 2: Male actor in the executive lounge at the airport preparing to fly outside of China for a role that pays more than the restriction allows. And cut. This new directive takes place at the same time that one of the most popular movies in China is a black comedy based on a true story of a leukemia patient smuggling cancer drugs from India into China. Such imported drugs were previously taxed at draconian levels. We expect most people, including officials, will miss the connection between these two China movie articles. Incentives/disincentives often are ignored in policy makers efforts to shape the world to their desires.

Accelerating into the Future, No Man is an Island and Our Favorite Story Solar in India, Doctors and Truck Drivers and Who is Most Inclusive
Scroll to top