Even as the baseball season has ended and leaves us, as Bart Giamatti wrote, to face the fall alone, a video reminds us of standing outside Safeco Field on a warm summer eve, in a long security line as a recorded voice scolded us regarding the myriad of stadium prohibitions–what we cannot bring in with us, what we can’t say, what we can’t do. Rather than a feeling of welcoming to America’s pastime, instead the aura outside the ballpark is one of entering a federal penitentiary. Ahh, but in China, as you see in the video on Twitter (which we can’t figure out how to embed in this post but urge you to click on the link) when you board a train you are warned “your behavior will be recorded in an individual credit system” and are told how you can avoid a “negative record of personal credit.” And we wonder, as did the person who filmed the video, if this is our dystopian future. We are against this future, at least for the common people, but could see how it might be put to good use for certain public figures, even certain presidents, perhaps. But maybe that is what we are all destined to become: celebrities in a paparazzi, tabloid world, our full foibles, minor and major, tuned into and judged by the whole wide world, or at least by a governing minority. As we duck away from photographers hiding in the hedges, we dive deep into Chinese dog obedience rules and their relation to China’s economy and politics, provide an update on the world’s most underrated country and explain how Central America is changing. It’s this week’s International Need to Know, the Jaime Lee Curtis of international news and data–exposing the demons and welcoming the heroes.

So about China’s social credit system, where they monitor and grade people’s behavior, ala a certain Black Mirror episode. It has come to our attention that in Jinan, China instituted a dog-owner rating system, monitoring and grading dog owners on walking their dogs without a leash, not cleaning up after them and keeping them from barking. The government claims marked improvement in dog owners behavior since implementing the system (as with economic data, one raises a skeptical eye or perhaps stops wagging the tail). Speaking of Chinese economic data, George Magnus claims further evidence of an economic slowdown by noting that urban employment growth is slowing (see graph below). Urban jobs are mainly service jobs and those, Magnus says, are not as plentiful as before. And yet China is presumably employing more censors. Perhaps they would like to install some in Brazil where a populist (the world overflows with them) has been elected president, one with a distinctly anti-China perspective. “The Chinese are not buying in Brazil. They are buying Brazil,” the new President of Brazil Jair Bolsonaro has warned repeatedly. Which is all to say that China may find dog owners easier to regulate than other countries and their own economy. 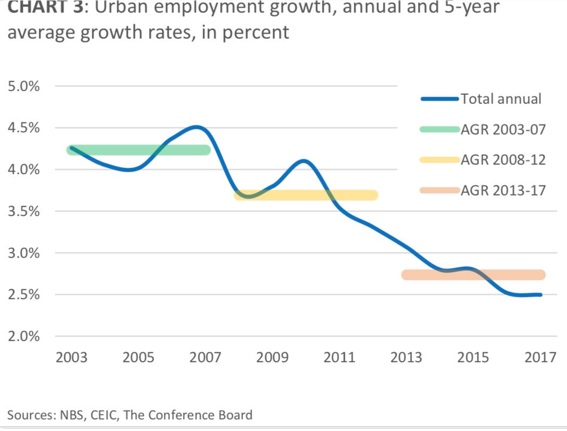 Back in July, we reported on the undernoted success of Ethiopia—it has been the fastest growing economy in Africa the last ten years among other positive developments—and today we provide an update that reflects both the country’s positives and continuing challenges. A few weeks ago the reform minded Prime Minister* Abiy Ahmed reshuffled his cabinet and appointed a Minister of Peace charged with tackling (what’s a more peaceful verb we could use?) the continued ethnic violence in the country. According to Reuters Africa, “About 2.2 million people out of a population of 100 million have been displaced since clashes broke out last year, many of them between rival ethnic groups.” In addition to striving for ethnic reconciliation, the Prime Minister is gung-ho on gender equality–after the cabinet reset, now half of the ministers are women. And this week the parliament appointed Ethiopia’s first woman president, Sahle-Work Zewde.  Ethiopia has many challenges to face but given its political and economic trajectory we continue to search for an Ethiopian ETF.

*Unlike Saudi Arabia’s ostensibly reform-minded MBS, Ethiopia’s Prime Minister Ahmed has not had any journalists murdered. In fact, since taking office he has freed journalists, bloggers and political prisoners arrested by prior administrations.

The world is ever changing as we were reminded recently when we traveled to Walla Walla, once a sleepy farming community that is now a hung-over wine oasis with 200 wineries dotting the area. The old cliché is generals are always fighting the last war, which Noah Smith quantifies smartly in terms of immigration and allows us to once again point out there are fewer Mexicans living in America than five years ago. This, as Smith points out, is because Mexico has become richer and is having fewer babies. So fewer Mexicans feel the need to leave their country seeking economic opportunity and more are returning home to take care of aging parents. The same pattern, Smith shows, is emerging in Central American countries—El Salvador, Honduras and Guatemala. In each of these countries, as in Mexico a generation earlier, fertility rates are falling rapidly. At the same time, GDP is rising rapidly and is crossing the $8000 per capita mark, a point at which populations’ emigration levels usually start decreasing. Like most parts of the world, Central America is not static, it is ever changing—and so too will the U.S. immigration debate ten years from now. 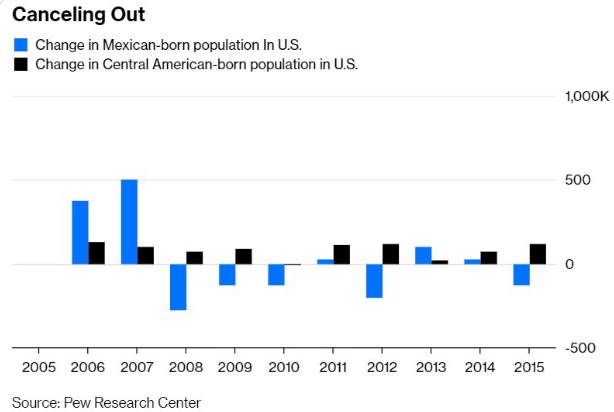 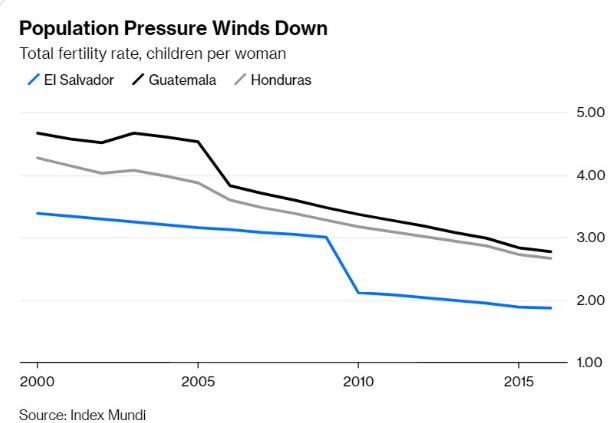 Asia’s Most Trade Dependent Country, Who is Most Popular and Where the... Change of the Top Companies, Change in European Cultural Values, Change among...
Scroll to top