As the media beats the dead horse race of the American mid-term elections, we were reminded of what elections are supposed to be about while standing in line to talk to a health insurance consultant as part of our continuing struggle to restore our left knee to full functionality. A woman who had just finished talking to the benefits consultant walked past us with the look of one trapped in a DMV office for six hours, muttering, “It’s too *&%$ing hard.*” Only a few hours earlier we were helping an international visitor in need of medical help. We brought her to a health care facility who discovered that her insurance, purchased here in America to take care of her during her year-long work visit, did not provide coverage for the medical condition she had. We would not have been surprised if she too felt compelled to utter the same epithet that the other woman did, but she merely muttered, “This would never happen in my country.” The American health care system combines the worst aspects of capitalism and socialism, a Fitzgeraldian irony polishing the American dysfunctional policy shoe, the ultimate dab of the Nurse Ratched policymakers. So we limp into this week discussing change—how much there has been in the world’s top companies, the lack of it in certain European cultural views and how much immigrants to Sweden experience. It’s this week’s International Need to Know, if not trying to cure the world, placing an informational stethoscope to its beating heart.

*INTN is family-oriented. To see the unedited quote you have to subscribe to premium service.

A Change is Gonna Come…and Has

We have expressed concern in this space about the incentives and policies that favor large companies over small. In America, everything from land use to the way environmental protection is regulated to patent law gives big business an advantage. However, when we look at the global list of the largest companies in the world as measured by revenue, there has been significant change since 2008. Visual Capitalist graphs this list and finds,“43 of the 100 companies on top of today’s list were not there ten years ago.” Among the biggest changes are the increase in Chinese companies. In 2008 there were only three Chinese companies on the top 100 list, today there are 21. However, all three Chinese companies in the top ten are state owned enterprises such as China National Petroleum. Will they be there in 2028? And despite many people expressing concern over the power that technology companies have over all of us, “only a handful of tech companies have cracked the top 100.” Scan the whole list to confirm or challenge your biases, or perhaps both. 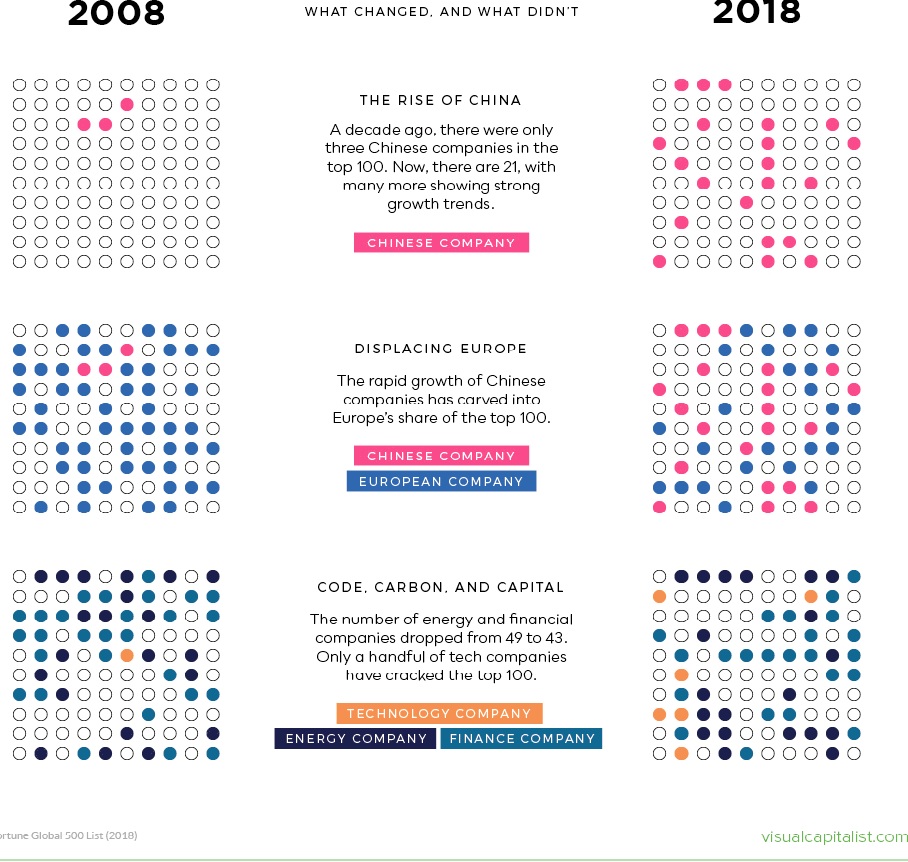 Companies change more quickly then culture. This is evidenced in a Pew Global survey of European attitudes on issues such as gay marriage, acceptance of Jews and Muslims, and interest in religion. For example, according to Pew, “Majorities in all of the surveyed Western European countries favor same-sex marriage, while majorities in almost all of the Central and Eastern European countries oppose it.” Just over 73 percent of French people support gay marriage, but a gay couple may want to hold off on buying a cake in Hungary where only 27 percent support gay marriage. Central and Eastern Europeans are less willing than Western Europeans to accept Muslims and Jews into their family or as neighbors (never mind a gay Muslim or Jewish person). Perhaps Muslims and Jews in the Middle East have more in common than they realize. It may not be a coincidence that Eastern Europeans are far more religious than Western Europeans, “majorities say that being Christian – whether Catholic, Orthodox or Lutheran – is an important element of being “truly Lithuanian,” “truly Polish,” etc.” Like the United States, the EU’s constituent parts are very different. 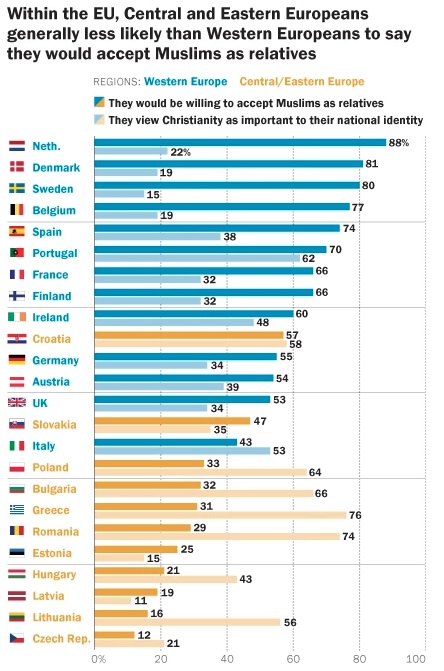 But Change Has Come to Sweden

At first blush, Sweden may seem a homogeneous country that keeps on chugging economically and socially in a calm, never changing way. This is not true. Sweden has changed its economic policies and politics often over the years and over the last few decades has become a large recipient of immigrants. In fact, as a new paper reports, “As of 2016, about 17% of the Swedish population was foreign-born, compared to less than 7% in 1970. By comparison, the share of foreign-born in the United States was at about 13% in 2013.” So how are these immigrants doing economically? Immigrants to Sweden do relatively well when normalizing for starting income. But the paper’s author also reports, ”that immigrant children born into poor families are slightly more likely than similar natives to both reach the top of the income distribution and to stay at the bottom.” They are also considerably more likely to obtain a college degree. Immigrant children coming from “refugee-sending” countries such as Iran, Syria and Bosnia have higher incomes and inter generational mobility than other immigrants in Sweden. Why this is, is a mystery. Or, as the author says, “Further research is needed.” That is something that never changes. 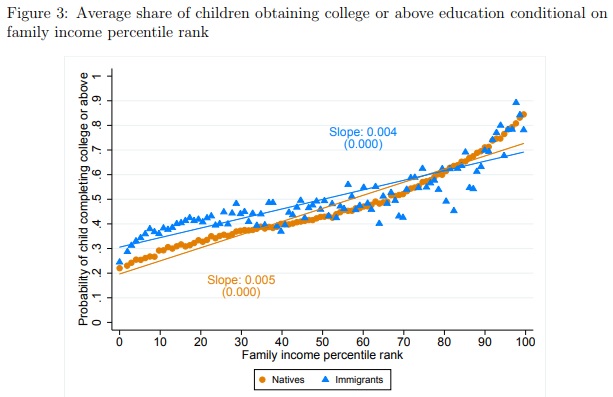