Last weekend we attended a benefit concert for Seattle Children’s Hospital at which three very diverse bands played. The Head and the Heart, a local Seattle band, were the headliners–a folkish trio, full of earnest melodies and lyrics. The second band of the night was New Orleans’ Preservation Hall Jazz band, who blew the house down with the rollicking, grooving northern Caribbean sounds that infuse the crescent city. The trombone player astonished with his sound, exuberance and the fact that he is somehow overweight despite his being in constant motion throughout the show (we imagine he must lie down on a comfortable couch the other 22.5 hours of the day). The opener was Kyle Craft, a young sapling singer-songwriter out of Portland, Oregon who somehow synthesizes glam and southern rock. So the three bands were diverse in types of music, age, race and in many other ways. The audience? Not as much. We feel there is a larger point to be made here about the current state of America, its political and other divides, but while we reach for it, we examine the glam of rich Indians, earnestly apologize for placing Singapore above Rwanda and riff on the jazz of Chinese-English misinterpretations. It’s this week’s International Need to Know, crafting and preserving important international matters while using both our head and heart.

The Increasing Number of Rich Indians

As the world watches China and the U.S. stomp around each other in a drunken global scavenger hunt, India continues to make stealthy progress.Take rich people for instance. India is growing them much faster than the rest of the Asia Pacific. Quartz India reports that, “In 2017, the number of high net worth individuals (HNWIs) in India grew 20% year-on-year, higher than in any other country, to 278,000.” The average growth rate of HNWIs (defined as people who have at least $1 million in investment worthy assets) in other Asia Pacific countries is in the 10 percent range. The increasing number of wealthy Indians is driven by a fast growing economy–India’s GDP more than doubled in the last decade. Coupled with strong GDP growth, however, India also is experiencing growing inequality—it is the 12th most unequal country in the world when measuring its gini coefficient (a crude measure of inequality). Of course, when you compare the overall number of HNWIs rather than the increase of them, India lags far behind Japan and China (see second chart below). Nonetheless, India is growing fast. Don’t tell Trump or Xi. 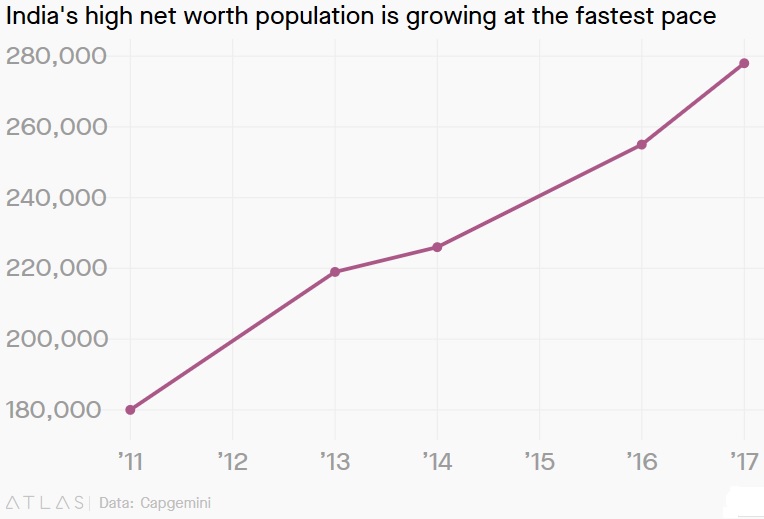 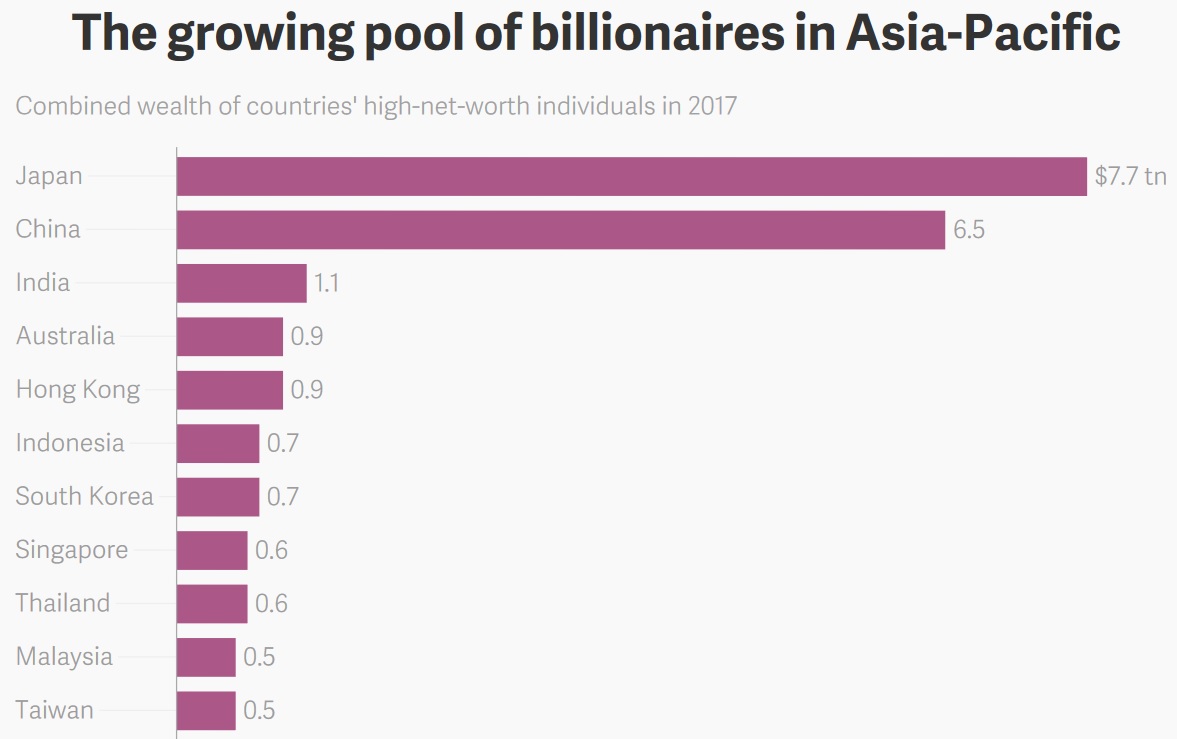 So last week we were touting Singapore as ahead of the curve in preparing for drone deliveries. It took less than a week for us to sit corrected at our keyboard because it turns out Rwanda of all places is ahead in the drone delivery deployment game. This is due to the Silicon Valley based company Zipline partnering with the Rwandan government on delivering medical supplies. Says Zipline in an article on techmoran.com, “We now deliver over 35% of Rwanda’s national blood supply outside the capital city of Kigali, and we are saving lives everyday.” Zipline’s drones have a 160 km range and can carry 1.5 kilos (3.3 pounds for you non-metric heathens) of cargo. According to the article, “Health workers place delivery orders by text message and receive their package within 30 minutes on average.” Zipline so far has contracts in Rwanda and Tanzania and is about to enter the Nigerian market. Africa was an early adopter of cellular technology because of its lack of landline infrastructure, leapfrogging over developed countries in this technology. Perhaps the same will hold true for drone technology. Sorry Singapore. 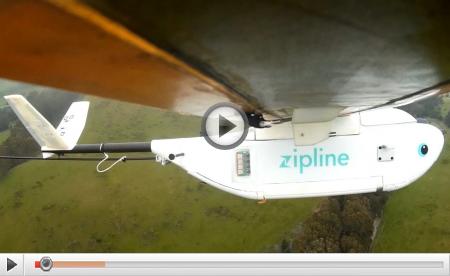 I Refuse to Translate That

During the dinner in Buenos Aires last weekend with the Trump and Xi camps, many people noted the only two women in the room were the two interpreters. Some wags also noted the two most important people in the room were women. Indeed, we have been in meetings where interpreters selectively translated the participants’ words, perhaps for good reason. So, maybe you were thinking translating apps could alleviate that problem. Apparently not if you are using the Chinese translating app, iFlytek. According to cnet.com, a software engineer tweeted that the app “censors politically-sensitive phrases.” Says cnet.com, “when she tried to translate certain phrases such as “Taiwan independence,” “Tienanmen square” and “Tienanmen square massacre” from English to Chinese, the system failed to churn out results for sensitive terms or names.” Cnet tested this and did not find the software as censorious as the software engineer did, but noted it would stifle certain sensitive terms. Interestingly, the app would translate Winnie the Pooh from English to Chinese. Maybe China really is opening up due to pressure by Trump. Or maybe Winnie the Pooh is more powerful than we realize. 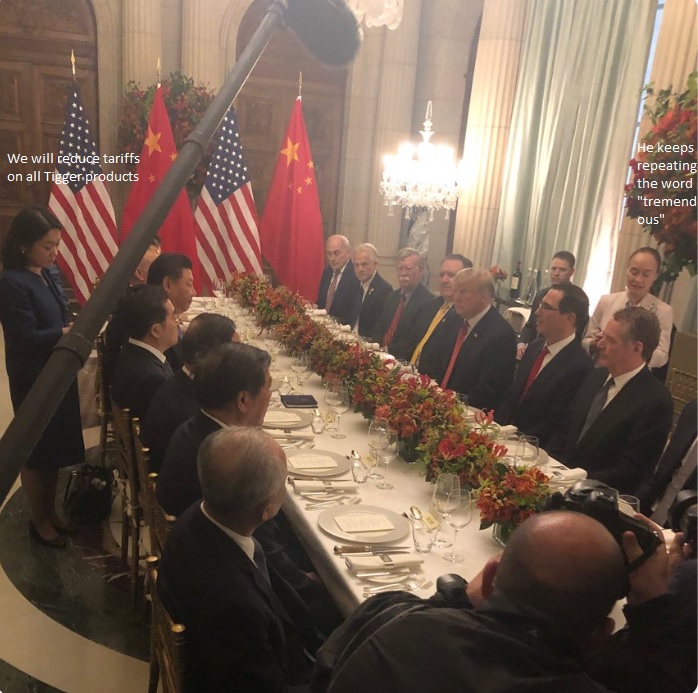 Wrong Mental Image of World, Drone on about Singapore, and Who is Digitally... Arrested Development, Self-Driving Cars Are Here, and Tehran Is Sinking Scroll to top