As we entered 2019, we read about police called to a house where neighbors heard a baby screaming and a man yelling “Why Don’t You Die?” only for the police to find the arachnophobic man trying to kill a spider. And so we recalled our time battling a praying mantis. We had arrived back in Washington, D.C., where we then lived, after midnight, and let ourselves into the second floor apartment of the townhouse. We went to our bedroom to get some shut eye. But before we turned off the light we saw an extremely large praying mantis on the window sill making eyes at us. We slashed down at the large insect with a broom but only managed to knock it under the radiator. This would not stand. We needed proof of the beast’s death. So on our hands and knees we peered under the radiator but saw nothing. We looked from above down into the radiator. Still nothing. We tried hitting the radiator with our broom, hoping to flush it out. We strode the bedroom, broom in hand, searching for the treacherous mantodea. Until the phone rang. It was the tenant in the downstairs apartment, a formidable RICO lawyer for the Department of Justice, who fought organized crime. She wondered why we were making so much noise at one in the morning. We sensed this resilient esquire may not understand our epic battle with the praying mantis so we merely apologized and promised to keep quiet. We hung up, stared at the radiator, and slipped into our bed with one eye on a good night’s sleep and the other on the lookout. 2019 is sure to be full of many miscommunications but today we communicate clearly about China’s economy, big news in India and how we might utilize air pollution. It’s this week’s International Need to Know, welcoming a new year of international data, information and trends. 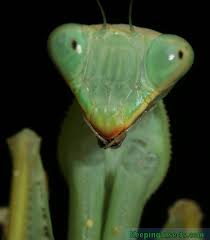 What is Going on with China’s Economy?

It is one of the four most important questions of 2019 (welcome new year, may your time on this planet be fruitful, fun and wise). Even as the Chinese economy continues to officially grow at 6.5 percent there is speculation that it is actually doing much worse. A variety of China watchers and economists opened up the hood of the apparently reliable China Volvo, examined its carburetor of underlying data and began to worry the engine block may be cracked. The China bear Christopher Balding points out in Bloomberg that consumption tax revenue has declined each of the last two months, 62 percent and 71 percent year over year. He also notes possible trouble coming down the pike, “With new loans outpacing new deposits by 13 percent in 2018, how the government recapitalizes a strained banking sector will be a major theme in the coming year.” Meanwhile, manufacturing is weakening with the manufacturing purchasing manager’s index (PMI), a gauge of factory work, dropping below 50, a sign of contraction. However, the non-manufacturing PMI rose to 53.8 so maybe this is all part of the long talked about transition from a manufacturing to service economy. Ah, but there are allegedly 69 million empty apartments in China. So, what’s happening in China? We don’t know but perhaps 2019 will reveal more than her retired cousin 2018. 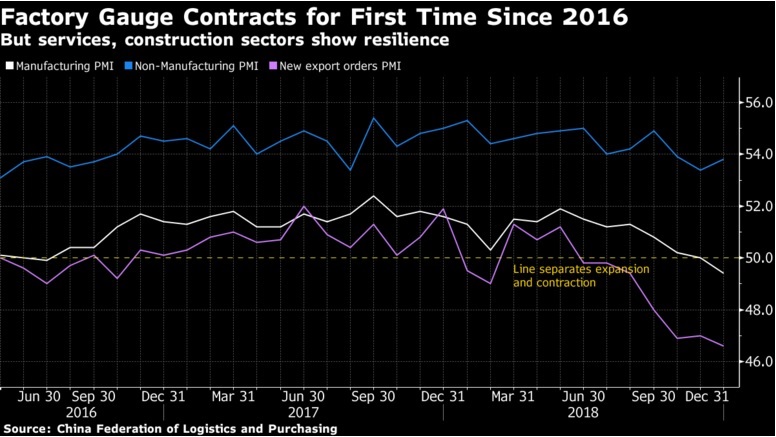 Speaking of China, although the trade war between China and the U.S. is not having large aggregate effects on the countries’ economies, we are seeing supply chains change which portend long-term effects to the world’s economy. One apparent such change are the reports that Foxconn, the large Taiwanese electronics manufacturing firm with huge assets in China, will start assembling iPhones for Apple in India later this year. [Ed note: this was written before Apple announced “subdued sales”–our correspondent may have more to say about that next week]. Apparently the new plant, which will be located in Tamil Nadu, will concentrate on high-end iPhone models. Whether these will be additional phones or Foxconn is moving some assembly from China is not clear. But if true, it’s another tangible sign of the world’s supply chain evolving in response to new geopolitical (and economic) realities.

Progress on the emission of climate changing pollutants has stagnated over the last year. And given the protestors in France, Americans voting down carbon taxes and other such recently expressed sentiments around the world, there does not seem to be much appetite for curbing the emissions. But perhaps if we frame the problem as air pollution there will be more progress. After all, air pollution is a visible and huge problem around the world. The World Health Organization reports, “nine out of ten people worldwide breathe polluted air.” Where is air pollution the worst? Yes, China has bad air pollution but it’s even worse in India, Pakistan and Egypt as you see in the map below. This air pollution has visible effects and, unlike climate change, impels people to complain and protest. Maybe the world uses this problem as the trojan horse to solve climate change emissions. We will all breathe easier if so. 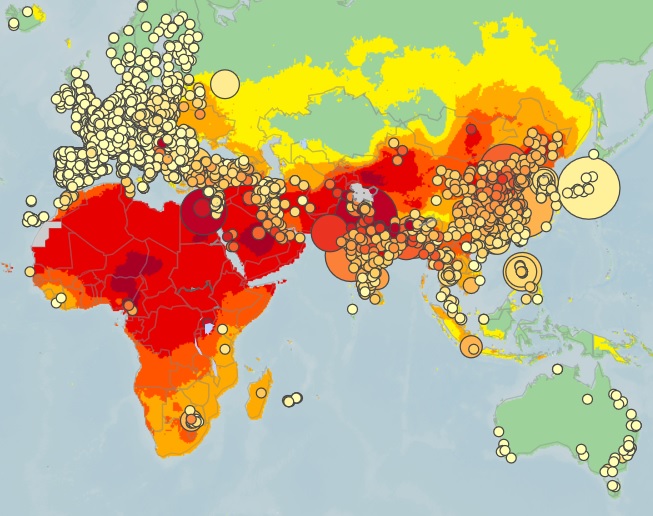 Our Cultural Distances, Is it Safe, and Gender Inequity Tony Soprano Mystery of China, Christopher Moltisanti Sadness of Europe and...
Scroll to top