Listening to the news of the G7 meetings as we drove to the gym earlier this week we were reminded of just how complicated communication is and how it can lead to international misunderstandings, botched negotiations and even wars. As we drove, an older man, cigarette dangling from his lip, turned left out of the cross street cutting us off. Fine, fine. We put on our brakes and slowed down. He drove very slowly in front of us and the woman behind us honked her horn angrily. The man gestured furiously at us, thinking we were the horn honker. We shortsightedly made a motion to indicate we did not honk our horn, it was the person behind us. But it is difficult to communicate this with hand gestures and the man in front grew more angry and flipped us off with great fury and righteousness. This caused us to laugh, which made the man even more angry and he rolled his window down yelling and screaming at us, which made us want to laugh even more but we decided somber discretion was the better part of humorous valor. We looked in our rear view mirror and saw the woman behind us seething even more deeply as we all drove ever so slowly. The man in front finally turned left again and we carried on our merry way. While you determine which one of us was Trump, which one Macron and which one Merkel, Putin or Rouhani, we lift our arms in hope at the worrisome and confusing Amazon fires, give a tentative thumbs up to social media and thumb our nose at Asian debt. It’s this week‘s International Need to Know, looking for love and international news and data in all the right places.

Ethiopian Ents Strike Back Against the Amazon

The fires in the Amazon are distressing not only for environmental reasons but also because we’ve seen so much contradictory data about the extent of the fires and just how big a risk they are to the Amazon. So rather than weigh in with more data, we will do three things: 1) point you to an expert on the Amazon who admits even experts “don’t know how much of the Amazon forest is burning” but does describe what is verifiable and known and offers reasonable prescriptions of what needs to be done to protect the Amazon; 2) point to a report in Nature that found between 1982 and 2016, global tree canopy cover increased by 2.24 million square kilometers; and 3) remind you that a month ago Ethiopia planted 350 million(!) trees and aims to plant 4 billion over the next year to substantially restore forested land. Currently only 4 percent of Ethiopia is forested compared to 30 percent 100 years ago.  We point all of this out not to make you less concerned about the Amazon but instead to give hope and a path forward. You’re welcome. 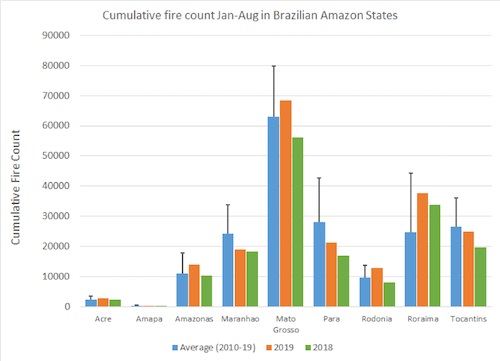 Maybe Social Media Is Not So Bad?

When we first joined Facebook lo those many years ago, we very much enjoyed connecting with friends, seeing their cat videos, learning about their vacations and how their children are perfect in every way. We enjoyed getting the lowdown on Seattle Mariners trades on Twitter a few years later. Needless to say, social media has gone downhill and indeed these platforms are often thought of scathingly nowadays. And yet, here’s a new report from Pew Global showing that there are still salutary effects of social media use. “A Pew Research Center survey of adults in 11 nations across four global regions finds that, in many key respects, smartphone users – and especially those who use social media – are more regularly exposed to people who have different backgrounds and more connected with friends they don’t see in person.” One example the article gives is Mexican smartphone users more often interact with people from different political parties than people without smartphones and social media usage. Of course, maybe the way these Mexican smartphone users interact with people in different parties is to message them an angry emoji. Nonetheless, at least smartphone social media users are getting outside their bubbles.

McKinsey has a new report worrying about “Signs of Stress in the Asian Financial System.” The report notes increased corporate debt in the region, as the chart below illustrates with the mega-countries of China and India leading the way. McKinsey’s research finds that corporations in Asia are using a large share of their earnings to repay debt (Isn’t that good and portends a better future even if it makes for a problematic present?). The report also states that “households in Australia and South Korea have accumulated unsustainably high levels of debt.” In which industry sectors is the debt most concentrated? McKinsey’s research shows “that energy, industrial, and utility companies accounted for a significant share of stressed corporations in Australia, Mainland China, Hong Kong SAR, and India.” With a slowing global economy, this debt situation presumably worsens. Just how big a risk this all is we do not know but are sure we’ll find out whether we want to or not. 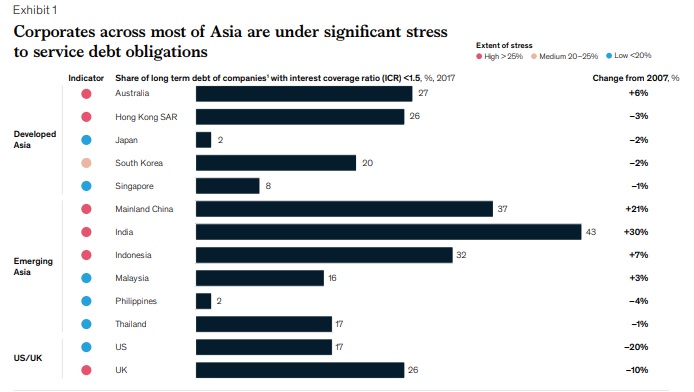