Damn the Three Gorges Dam?, Vietnam and a Closed World, and Bordering on Catastrophe

Regular readers of INTN know we like data and numbers. We try to use them to further understanding and as evidence for an argument. We try to use them logically. We don’t always succeed. We see others failing too. For example, the Capital Hill Organized Protest (CHOP) demands the City of Seattle cut the police budget by 50 percent. The Mayor of Seattle says she is reducing the police budget by 5 percent. This is a bit like when our cat Willow occasionally after her dinner flies into the family room at full speed leaping onto the back of the couch while making a sound like a penguin and then dashes back out again. We try to give meaning to Willow’s actions but more than likely it’s random cat-like behavior as depicted in the end credits of the movie Inside Out. The numbers 50 percent and 5 percent make no sense as tactics to enact reforms that will lower police violence. The logical approach is to state what specific steps are needed to reform police and then add up the costs and savings of implementing those policies. What are the costs and savings, for example, of transferring traffic safety responsibilities to a new parking enforcement-like organization, establishing civilian oversight structures, and re-sizing the number of police for an era of less crime (yes, violent crime is down 30 percent from 20 years ago and 50 percent from thirty years ago)? Once we have the costs and savings of implementing these policies we will decrease/increase the current police budget by X percent. This approach is less entertaining than Willow’s after dinner performance but will have actual impact on reforming the institution of policing in the city. While CHOP and the mayor crunch their numbers, we provide 53 percent assurance on the safety of the Three Gorges Dam, vouch for 67 percent of Vietnam’s successful containment of Covid-19 and provide 37 percent better understanding of the China and India border dispute. It’s this week’s International Need to Know, occupying T-Mobile Park and not leaving until the Seattle Mariners have better pitching, hitting and fielding. 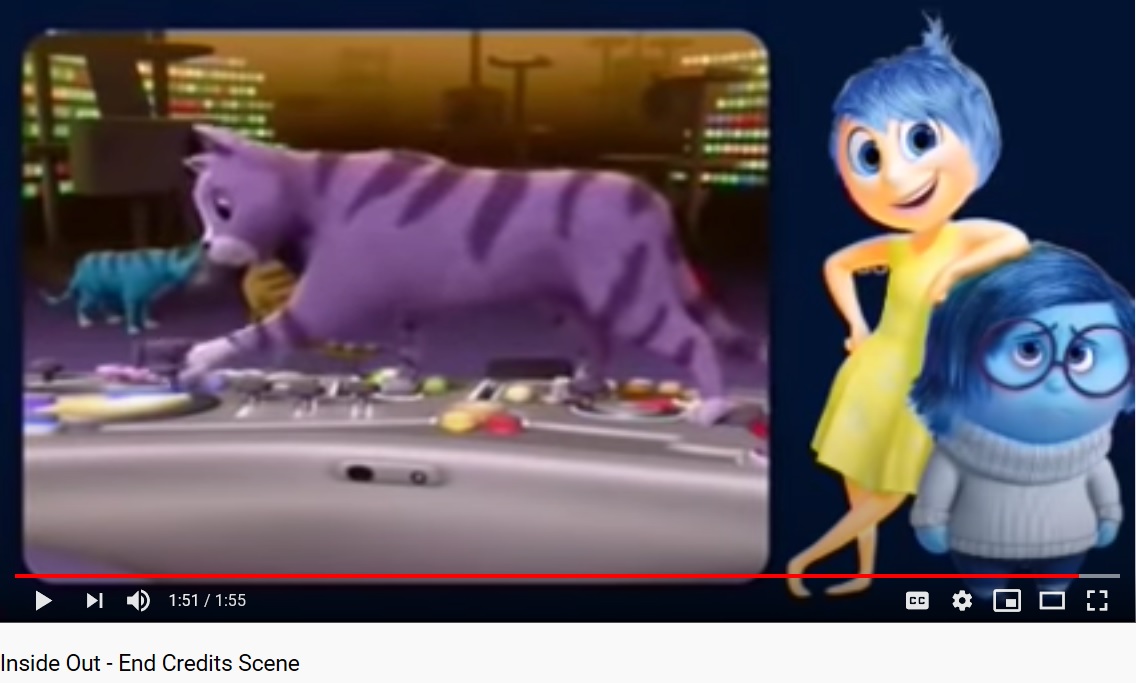 Next week we’ll be on vacation. Strolling the boulevards beside the Seine? Marching up to Machu Pichu? Touring the spice markets of Istanbul? No, in the age of the Covid-19 pandemic, vacation means we’ll spend the week cleaning out our basement, not traveling to some exotic locale. Which means our basement must be especially messy and we may find some exotic detritus when cleaning it up. Which means we won’t be tackling exotic international information and data. INTN will return the week after on July 9th.
Without further ado, here’s what you need to know.

The Three Gorges Dam on the Yangtze River in China has been hailed as both an engineering marvel and as an environmental disaster. We don’t know if either argument holds water but a new troubling question has arisen: Is the dam structurally vulnerable? Chinese hydrologist Wang Weiluo is claiming the dam is at risk of collapse which could put millions of people in harm’s way. That area of China has been experiencing heavy rains since the beginning of June. Already there have been mudslides affecting thousands of homes and millions of people in the Three Gorges Dam region. According to Taiwan News, “Wang pointed out that the dam’s design, construction and quality inspection were all carried out by the same group of people and that the project was finished too quickly.” Chinese authorities are asserting the dam is perfectly safe. But on Tuesday, a reporter for France 24 traveled to “interview Fan Xiao, a respected Chinese geologist and a long-standing critic of the Three Gorges Dam.” However, upon arriving, Fan told the reporter that China’s national security police instructed him not to talk with foreign journalists. Will Wang Weiluo be the next Li Wenliang? We are not a hydrologist or a geologist or an “ist” of any kind, and in no position to comment on the validity of Wang’s claims but we will say it would be very 2020 to have a major dam collapse. Covid-19 has so far not been China’s Chernobyl as some predicted but perhaps a hydro-electrical power plant could be. 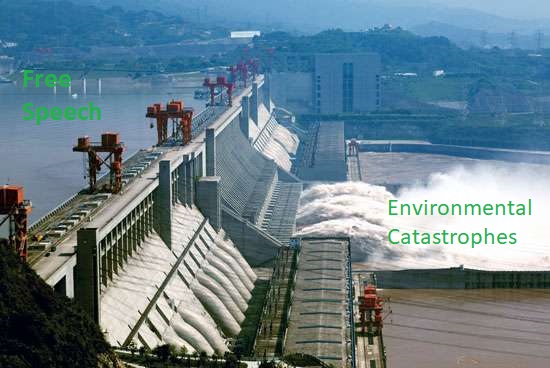 Vietnam and A Closed World

Earlier this week we met with someone who hopes to soon return to Vietnam. They live and work there but have been back in the United States for the last few months because they have a newborn baby and wanted to be near family and more developed health care facilities during the pandemic. He is in close contact with colleagues and friends in Vietnam and described the government’s robust contact tracing program which along with masks has successfully squashed Covid-19. His colleagues are back in their offices and holding in-person meetings. Even some events are being held. Life is back to normal and society re-opened. But not to the world, he points out. Vietnam is understandably scared of people outside of Vietnam bringing in a second wave and destroying their virus containment success. Its border remains closed. When the person I talked with returns to Vietnam, he and his family will have to quarantine in a designated hotel for 14 days and will be tested three or four times. Vietnam does not have the health care capacity to deal with Covid-19 but did have the state capacity to contain its spread. But their economy, although doing better than most, won’t recover until the rest of the world contains Covid-19. The U.S. should be embarrassed that its state capacity is less than Vietnam’s, and Americans less savvy at wearing masks than Vietnamese. America lost the war in more ways than one. 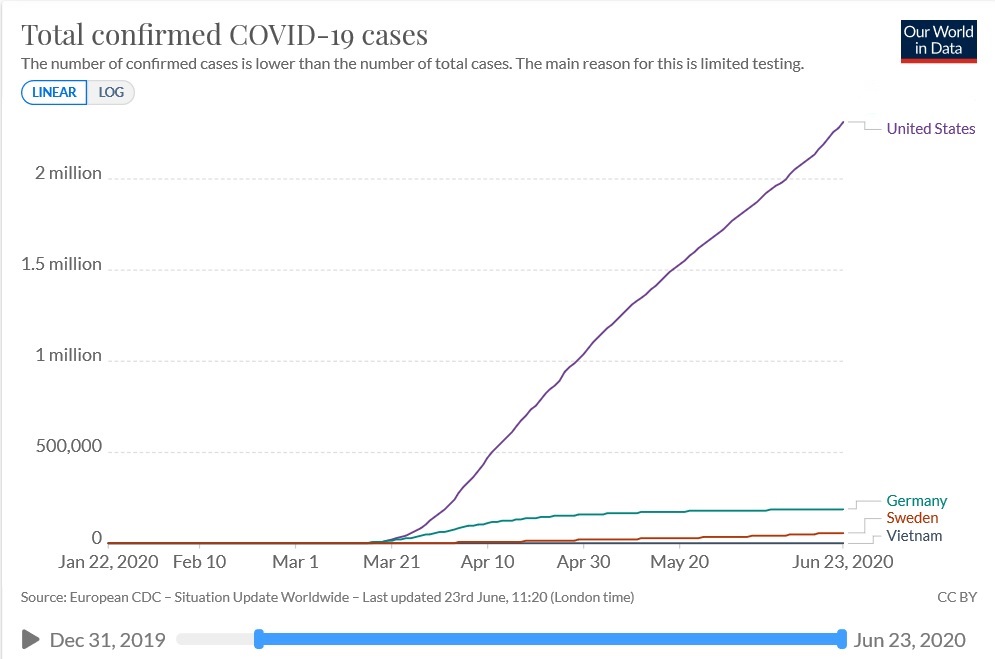 What is the real story on the India – China border? In answer to this question we write the three most underused words in the English language, “I don’t know.” A week ago India’s government claimed Chinese troops came across the border and killed more than 20 Indian troops. This week Prime Minister Modi downplayed the whole incident. The border confrontation received loads of attention in India’s free press but China’s state controlled media barely mentions it. What does it all mean? Again, we don’t know, but let’s add a little data for context. Since 1990, China’s military spending far outpaces its Asia neighbors, according to data from the SIPRI Military Expenditure Database (see first chart below). Then let’s look at GDP per capita. China is well above India but still well below South Korea and Japan. What happens in the second chart 10 years from now will be more important than the first. But, the ramifications of the first chart and the border dispute could effect what happens in the second chart. Which way will the charts go? See our first answer.* 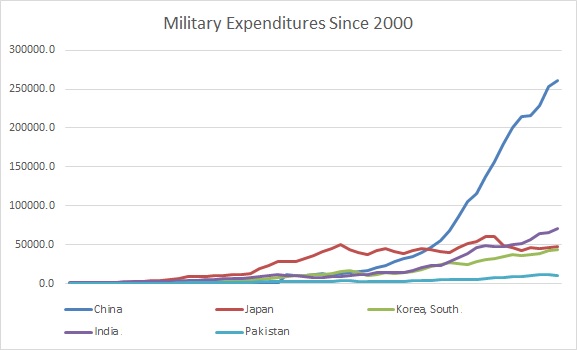 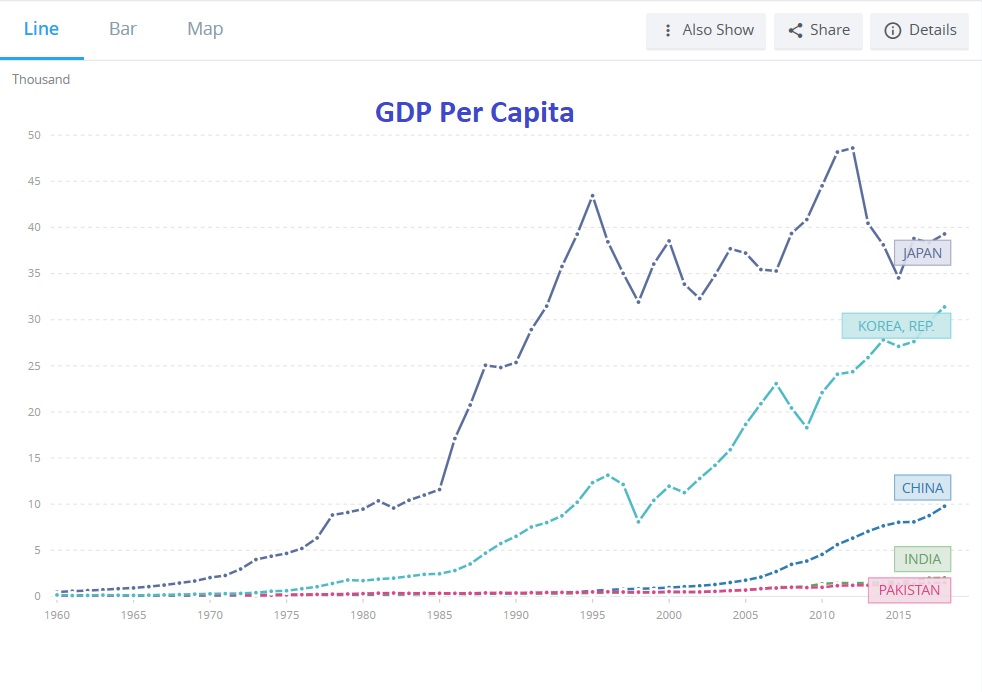 *Though we do know, and argue in our book, that China will no longer grow at high GDP growth rates. What India’s economy will do over the next ten years we have no idea. It has the potential for high growth given its youngish population and room for educational improvements but it needs better economic and social policies.

The Incarcerated, China’s Government is Weak, & Covid-19 Super-S... Untangling China and India, What The Hell is Happening With China, and Japan...
Scroll to top