Many years ago, when I first moved into my own apartment sans roommates, I suddenly realized the dishes left in the sink, the garbage not taken out and the room left unvacuumed were not just my roommates’ fault. After the U.S. presidential election next week, even if Trump is defeated that does not mean we have fixed everything. Many (most) problems predate Trump. Here in Seattle, for example, before Trump we had a terrible homelessness problem, crumbling, expensive infrastructure, high housing costs, racial disparities and many more challenges. Of course, under Trump none of these challenges were addressed and in some cases were made worse. But it’s not like they were being addressed effectively before he was president. Regular readers of INTN know we are no fan of Trump and hope he is voted out next week. But we are also no fan of pretending all of America’s problems start and end with Trump and that the Democratic party has all the answers (Editor: What are you a fan of? INTN: Er, uh, the Seattle Mariners. Editor: That explains a lot). So next Wednesday, when the election is over, and now that our hobby house project is complete (see photos below), is really when it’s time to roll up our sleeves and get to work. And we work today on who has power in Asia, a possible India-Taiwan free trade agreement, and Chileans calling for a new constitution. It’s this week’s International Need to Know, the best candidate for important international information and data. 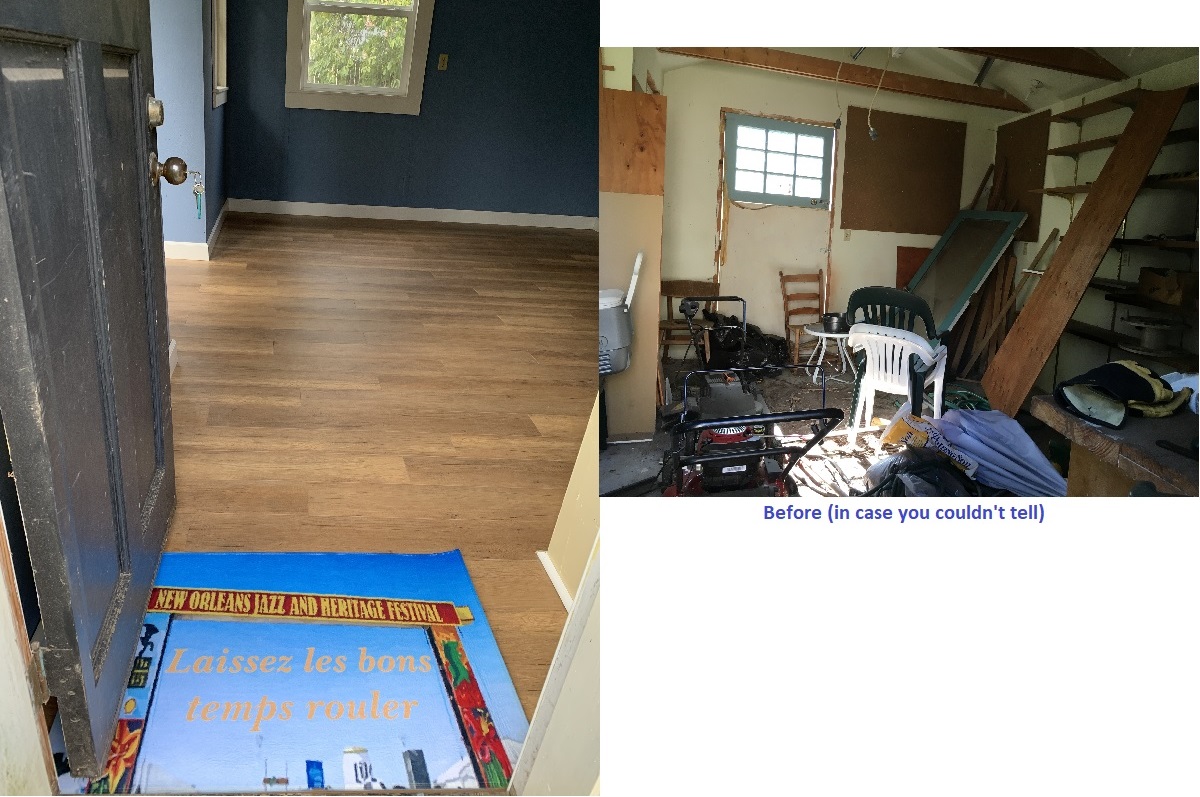 As we near the end of the first fifth of the Asian Century (will the 22nd be the African Century? The Mars? The Virtual Reality?), it’s a good time to take stock of the rapidly changing, ever more important, most populous part of the world. The Australian think tank The Lowy Institute tries to do just that with the release of their Asia Power Index 2020. This index gauges relative influence and power of Asian countries by scoring countries across eight measures, including economic capability, military capability, cultural influence and resilience. They define Asia relatively broadly to include the United States (Seattle, where we live, is definitely part of the Asia Pacific region), Russia and Pakistan. Who is the most powerful Asian nation in the index? The United States, followed closely by China. The U.S. is number one but “registered the largest fall in relative power of any Indo–Pacific country in 2020.” Japan is a distant third in the index but as we’ve chronicled over the last year, it is increasingly active in Asia, forming new alliances with Vietnam and India, for example. Speaking of Vietnam, along with Australia and Taiwan, it was one of only three countries to gain relative power in 2020.

Speaking of power in Asia, Xi Jinping’s overreaching, expansionist, ham-handed authoritarianism continues to rebound against China’s narrow-minded interests. India is looking at the possibility of negotiating a trade agreement with Taiwan. Since China considers Taiwan a part of China and attempts to force the rest of the world to do the same, this will likely not go over well in China. But given China has angered India with it border dispute and Taiwan has a democratically elected government, a distinctive culture that cherishes multitudes of freedom, and a government that has contained Covid-19 even better than China—in other words, Taiwan is indeed a country and a very successful one at that—perhaps it should not be surprising China has driven India and Taiwan into each others arms. India is grasping for trade and investment and Taiwan for legitimacy. Before the Covid-19 pandemic, trade between India and Taiwan grew 18 percent. As we have said before, no matter who is elected U.S. president next Tuesday, they will navigate the enormously large U.S. ship of state (that is in need of much retrofitting) in very changed waters from four years ago. 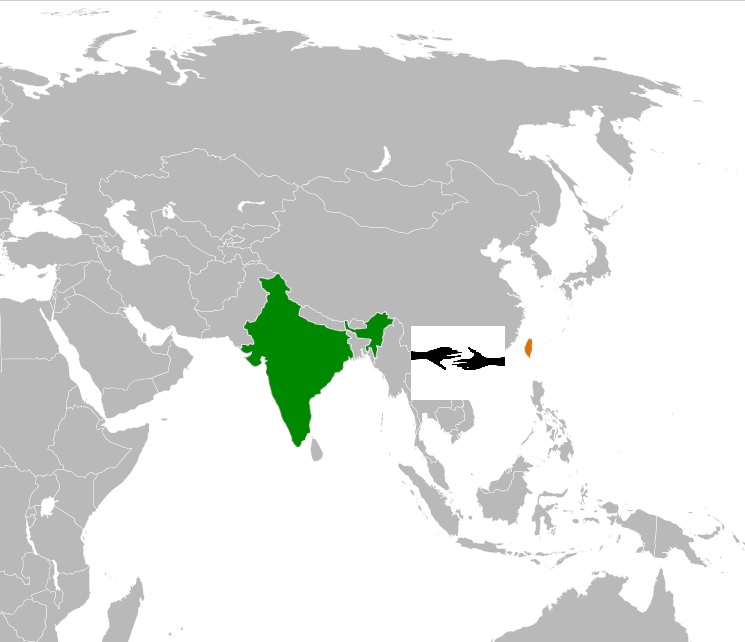 A number of years ago when organizing a delegation to Chile, we were walking to a meeting and turned into a road where large student protests were taking place. It was the end of the week and the government, apparently tiring of the protests, were shooting a water cannon at the protestors. We quickly found a different route to our meeting but also found a time to meet with the leaders of these protests later that week. We were reminded of this when we read the news that Chileans overwhelmingly voted to write a new constitution to replace the one approved during a 1980 plebiscite. We wish them luck in this process but are curious if it will lead to better results for Chile. The articles discussing this week’s vote all point to Chile’s inequality. During the massive protests last year over—check’s notes, a four cent fare increase for metro rail—inequality was given as the reason for the protests. And Chile’s Gini coefficient–a measurement of inequality where 0 is perfect equality and 10 complete inequality–is higher than most wealthy nations. But as you see in the first chart below, it has been steadily falling and lower than most other South American countries. And, the second chart shows Chile’s relative economic success compared to its South American peers (all the countries ahead of it in the second graph are in the Caribbean such as the U.S. Virgin Islands, Bahamas, and Aruba). Many of these articles citing Chile’s inequality blame it on its “capitalist” ways. And it is true the 1980 constitution provides for a large private sector role in education, pensions and health care. But, we hope in writing a new constitution, that Chile does not discard what has made it relatively successful even as it works to make needed improvements. 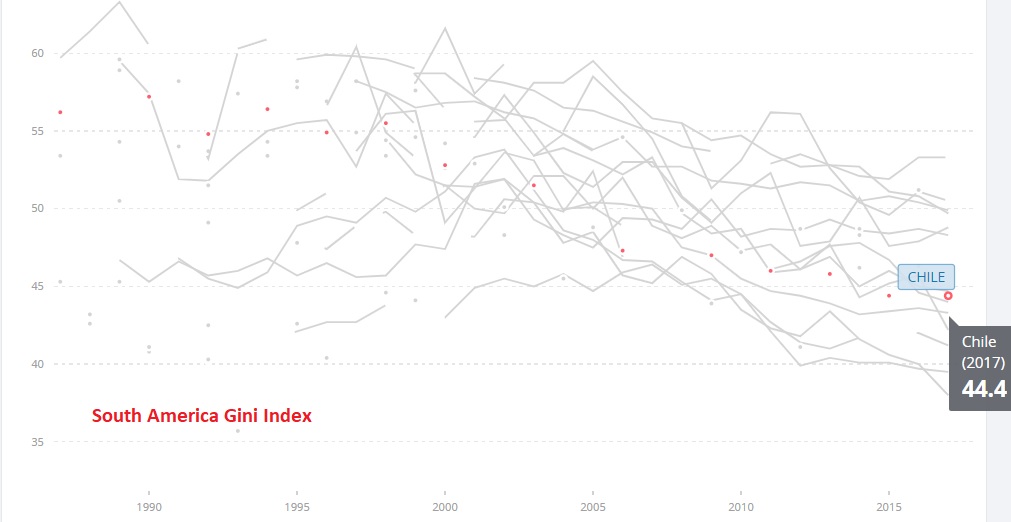