More Fog of Corona, Who Won the U.S.-China Trade War and Wealthy Families

There are many reactions to this week’s ongoing American election. Our first instinct Tuesday night was to develop a hard drug habit. But then we decided to take up either sky diving or fire walking as a hobby. Next we got on the phone with a travel agent to inquire about vacations to either North Korea or the Azerbaijan-Armenia border. But then our cat, Putter, crawled onto our lap, curled up and purred contentedly. It was a feline signal that the world had not, in fact, come to an end. Or, that we should start smoking cat nip. It’s difficult to decipher messages from cats.

As you might guess from the preceding, we were initially concerned about the American election. But, here in Seattle many a person has told us in recent years they want to recall Kshama Sawant, a radical member of the City Council, who, like Trump, is prone to authoritarian language. We always counsel the problem isn’t Sawant, it’s the voters who elected her. And so is the case on a national level. Far too many people bought what Trump was selling, or perhaps, have such a distaste for the Democrats’ soap, that they are willing to settle for the harsh lye of a Trumpian controlled party. So, no, the problem is not Trump, or at least not entirely. The problem is us. Americans no longer look forward, but instead backwards. We have become less ambitious, too willing to settle. Rather than tackle big challenges, we just shrug our collective shoulders. We accept the pandemic as is rather than trying to quash it. We navigate around crumbling infrastructure rather than figuring out why it’s so expensive in our country to build. We don’t worry about high housing costs and merely enjoy our well-valued neighborhoods rather than helping others gain the American dream. We don’t address any long-standing challenge or crisis, we merely limp along into the descending night. Perhaps America’s time has come and gone and it’s time for others to lead.

Or, perhaps, as we wrote last week, the real work has just begun–not to defeat candidates but to change minds. And perhaps your mind will be changed by more on the fog of corona, the real winner of the U.S-China trade war, and which countries have wealthy families. It’s this week’s International Need to Know, like Evan White and JP Crawford, the gold glove of international information and data.

The Continued Fog of Corona

Perhaps the wisest thing anyone can write is “I do not know.” Way back in March, near the beginning of the pandemic, we wrote, “In fact, we are willing to wager that much of what we think we know will turn out to be wrong in the light of longitudinal studies and time.“ It was essentially an assertion that we don’t know and understand the pandemic. We thought of this when looking at the latest infection rates. As we write, Europe and the United States are again gripped by rising infections of Covid-19 and some governments are again instituting strict lockdowns. As you see in the first chart below, Europe and the United States are by far the worst two regions in the world for infections. Following studies and data, we have long argued that testing, tracing and centrally isolating, along with mask wearing, are key to containing the virus. The United States has not done this. Some countries in Europe have, such as Germany, but none have used smart high tech techniques as South Korea and Taiwan have. So, yes, Europe and the U.S. need to get their acts together and implement such policies. But then, how do we explain Africa and South America where rates of infection remain far below the U.S. and Europe? They have not instituted robust testing and tracing, certainly not using high tech apps. Even certain parts of Asia are difficult to explain. Is it the weather? More social distancing? Some other factor? All we are left with are three words: We don’t know. 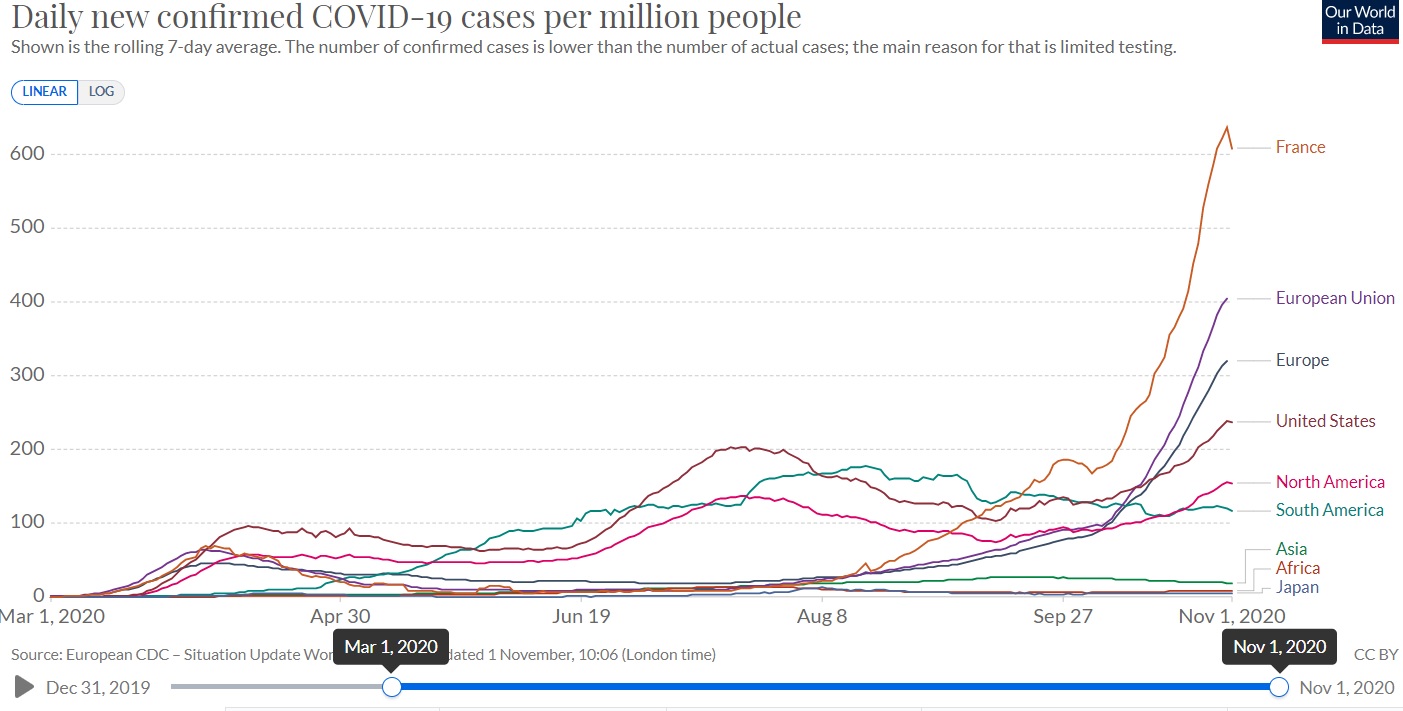 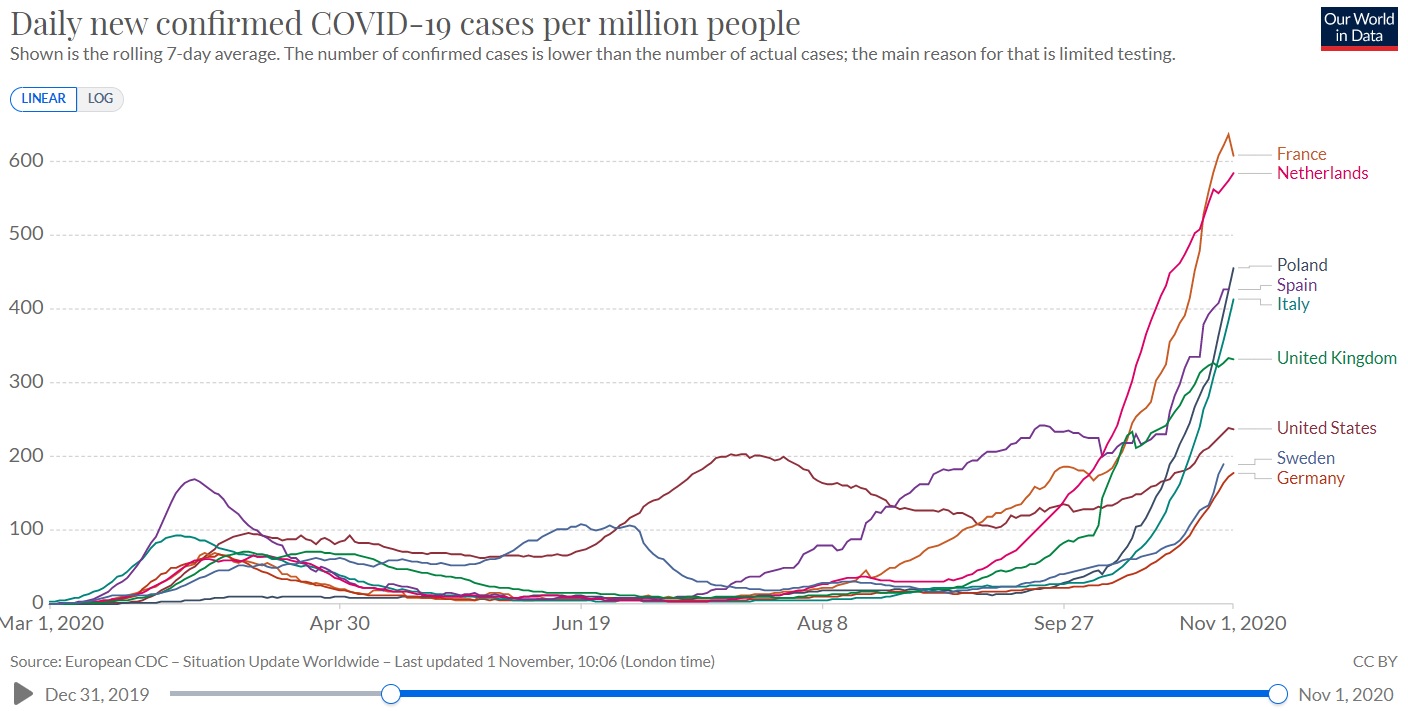 Pandemic permitting, we have plans to travel to Vietnam later next year. We are eager to again see up-close what we have called one of the five most important countries in the world. If Vietnam continues to develop economically, the big, unanswered question is whether it will slowly liberalize politically as did past Asian Tigers, or instead follow the template China now offers the world—remain authoritarian. Even with the pandemic, there are signs of Vietnam’s continued economic development. As a wag tweeted (do birds wag their tales?), the winner of the U.S. – China trade war is Vietnam. As you see in the chart below, since 2016, U.S. imports from Vietnam increased sizably even as they waned from China. And, for further evidence of the relative strengths of the Vietnamese and Chinese economies, Radio Free Asia reports “on a growing number of migrants crossing the border illegally from neighboring China, in an apparent reversal of previous trends…migrants had lost jobs in factories in the southern Chinese province of Guangdong, and had been hoping to find work in Vietnam.” As China’s economy remains soft (don’t believe the headline numbers) and as it enters what we assert in our upcoming book will be a new era of slow GDP growth, Chinese workers seeking employment turn to Vietnam. Of course, Vietnam is far smaller than China and won’t replace its neighbor in importance. But don’t underrate the consequence of Vietnam’s future on the world either. 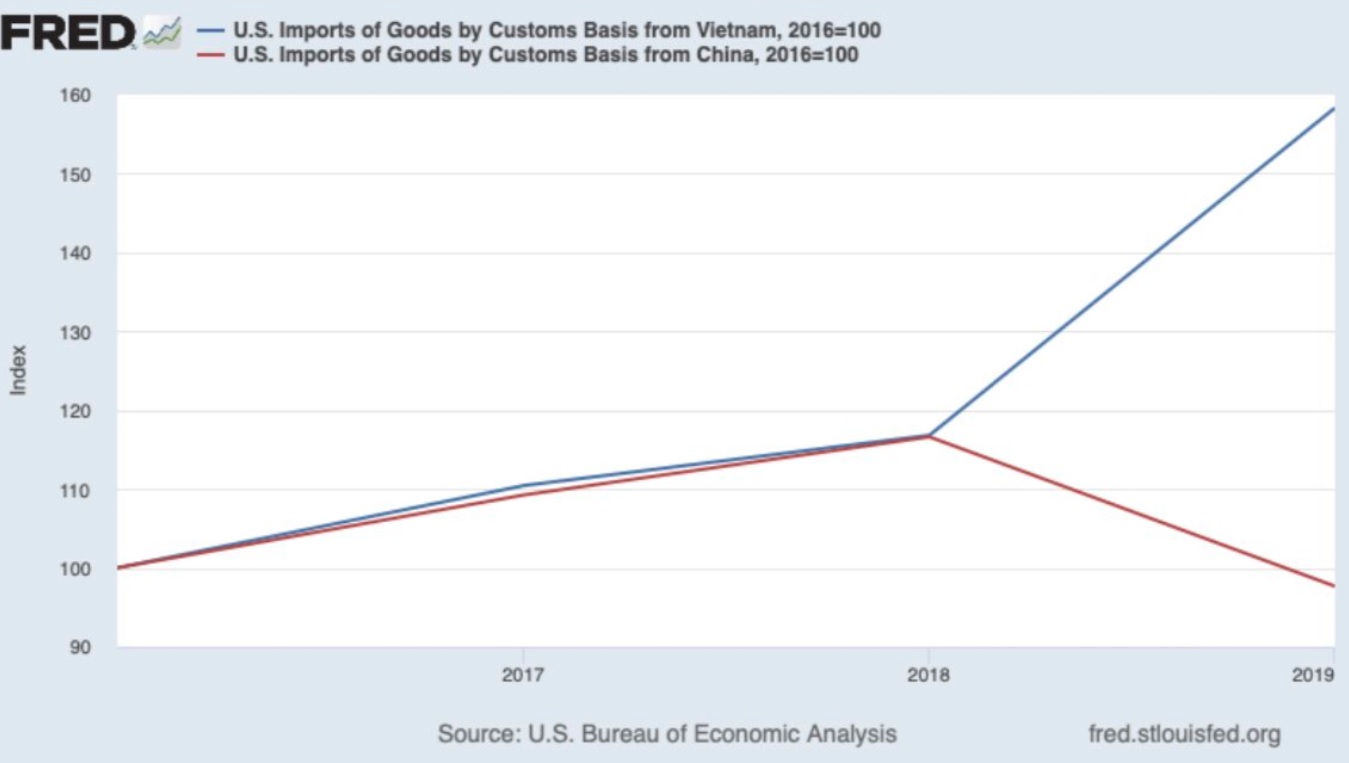 Where The Wealthy Families Roam

If Tolstoy had been a finance guy on Wall Street would he have written, all happy families are alike, they’re all incredibly wealthy? We don’t know but via Visual Capitalist, we recently examined the 25 most wealthy families in the world and discover that although more than a third are American the rest are in Europe and Asia (and one happy Canadian family). Both France and Germany each have three of the 25 wealthiest families and then it’s a bunch of one-offs in countries such as India, Saudi Arabia, Belgium and South Korea. The list does not include first generational wealth, by the way, or wealth “controlled by a single heir” thus excluding the likes of Bill Gates, Jeff Bezos and a number of Chinese multi-billionaires. Consumer services was the number one sector in which these families made their wealth followed by industrials. For those looking for sugar mamas or papas, we’re not sure which dating site the sons and daughters of these families use.