What SE Asia Thinks, Where Murder Rates are Decreasing and Save the Two Michaels in China

Hola. Nosotros estamos aprendiendo español. We’re doing so in the Gentleman’s Cove in our backyard you may remember we finished last fall. Each late afternoon or early evening while on our stationary bike we dutifully use the app Duolingo and practice. Last weekend we had to Spanish Stroll through nearly a foot of snow to get to the Cove. But we persevered. Neither rain, nor snow nor sleet keeps us from our appointed rounds, which also included our first oral presentation of our forthcoming book, Challenging China. University Sunrise Rotary deigned to have us speak (thanks to the masterful Tom Ranken for the invite) and they even provided $100 in our honor to a foodbank. If we do enough of these speeches, perhaps we can solve world hunger. Alimenta al mundo as Tito el Bambino might have sung in the Spanish version of the lame Christmas song originated by Band Aid.

At any rate, the presentation went well, and there were lots of good questions from the audience. Perhaps someday we will speak in espanol to a rotary club in Mexico, Chile, Argentina or Ecuador. In the meantime, we hablamoso about what Southeast Asia thinks, where murder rates did not rise, and ask China to free the two Michaels. It’s this week’s International Need to Know, as delicious as the King Cake our spouse made for Mardi Gras but slightly more educational.

If we were ranking regions of the world, and as you know, we often do, Southeast Asia would definitely rank near the top for most consequential for our near and mid-term future (Editor: Just how many categories do you have? INTN: A lot!). So we read with interest The State of Southeast Asia 2021 Survey Report produced by the ASEAN Studies Centre and the Yusof Ishak Institute. This is the third year they have conducted a survey of the 10 ASEAN member states on everything from “issues of concern” to “who they trust.” No surprise in this era of Covid-19 that the pandemic was listed as the top challenge by the respondents (76%), followed by unemployment (60.3%) and income disparity (40.7%). That so many populations around the world are concerned about income disparity makes us think a big change is coming to politics and economies (whether it will be helpful change is a different question). By far, China is listed as the most influential economic power in the region with three-quarters of respondents saying that it is the most influential. However, China is also the least trusted country by the respondents in the survey with 63 percent having no confidence in China. Japan is the most trusted country, followed by the E.U. and the United States. The whole survey is worth your perusal. Building alliances, trust, economic ties, and civil society connections in Asia in the coming years should be one of the most important foreign policy endeavors of the United States. Understanding their needs, concerns and wishes is a good place to start. 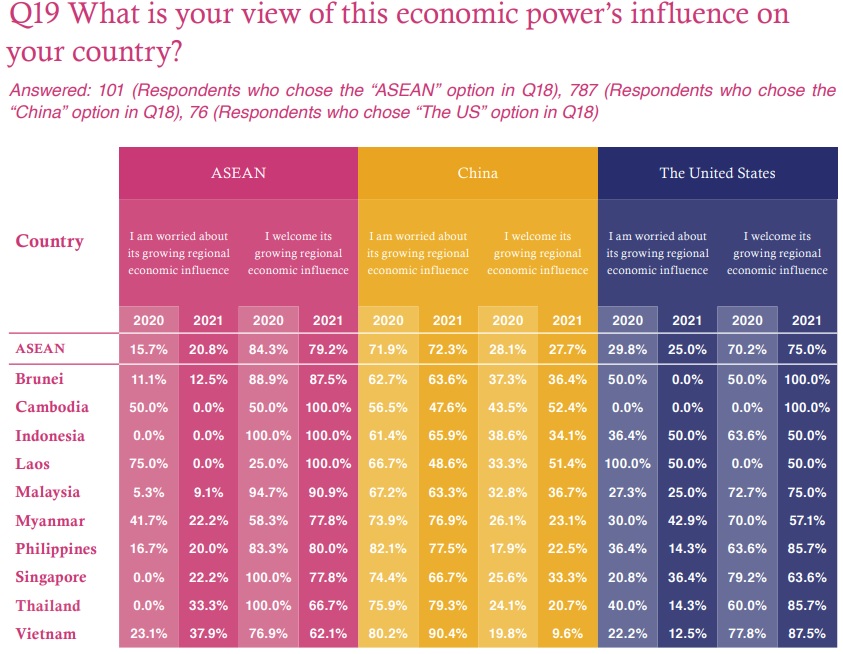 Seattle, our home, and where we’ve been stuck for 12 months, saw the largest increase in murder rates of any major city in the United States in 2020 (although overall it has fewer murders than most cities). Murder rates increased in many of the major cities of the United States in the last year for reasons that aren’t well understood. Is the increase pandemic related? We wondered about this as we scanned the latest report from InSight Crime which tracks violent crime rates in Latin America. In a majority of Latin American countries, murder rates were down in 2020. In fact, in nine countries, murder rates were down substantially. In six countries, murder rates were up—Brazil, Panama, Uruguay, Ecuador, Chile and Nicaragua. Interestingly, four of these countries are amongst the highest for Covid-19 cases per 100 people. Only Ecuador and Nicaragua had relatively few cases compared to other Latin American countries and had large increases in murders. Both of these countries had much political turmoil in the last year which may explain the increase. Of course, the U.S. had higher rates of Covid-19 than any of these countries AND much political turmoil. Perhaps that helps explain the increased rates of murder in America. Or, perhaps not. Crime data is very difficult to parse for causation. I’d murder for a good explanation. 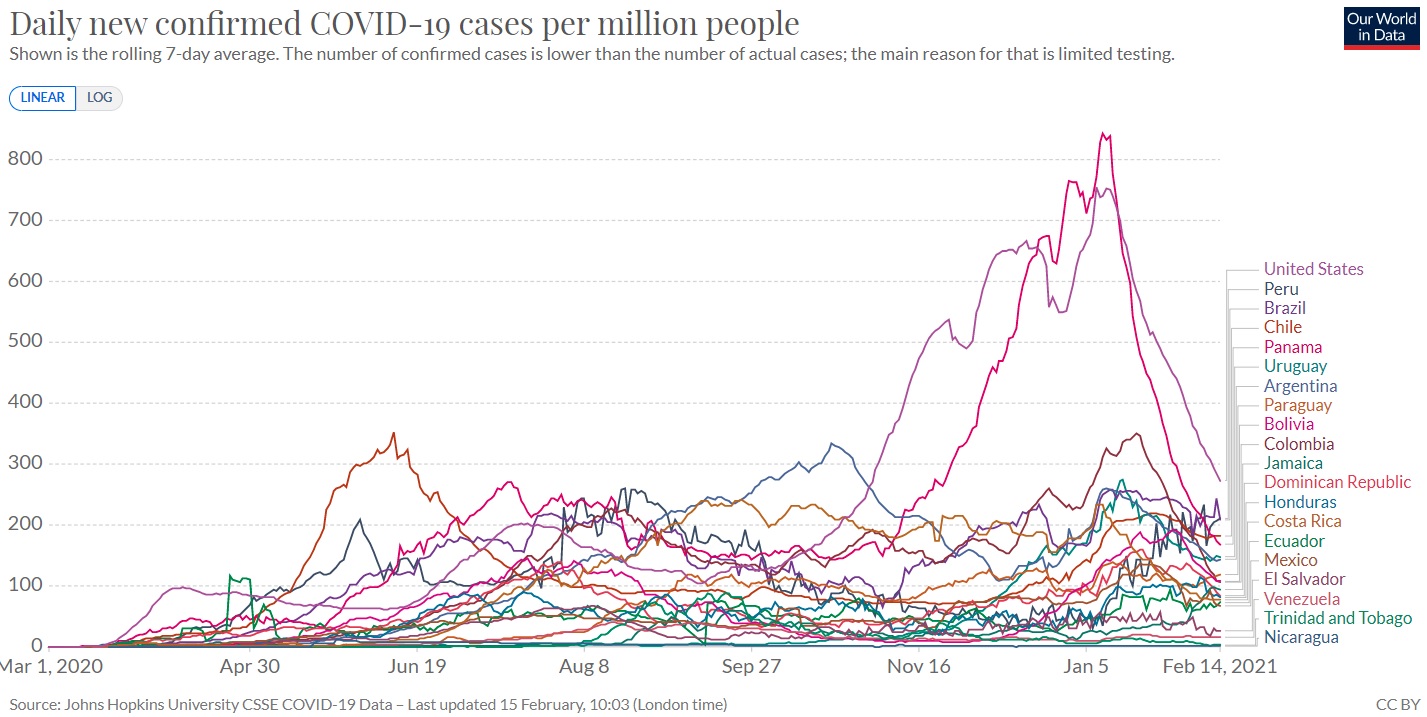 Today is the 801st day that two Canadian Michaels—Michael Kovrig and Michael Spavor—have been in prison in China for political purposes. This was done in apparent retaliation for Canada arresting Huawei CFO Meng Wanzhou using rule of law and due process. Kovrig and Spavor have experienced none of that and for large chunks of the 801 days were held incommunicado. As we write in Challenging China  “Meng is enjoying all the rights and regulations of the rule of law society that is Canada. Spavor and Kovrig are suffering under the usual cruel artifices of an authoritarian regime.” Now, under the leadership of Canada, The Star reports that “57 other countries offered vocal support Monday for a new international declaration denouncing state-sponsored arbitrary detention of foreign nationals for political purposes.” Countries on every continent have expressed support for the declaration, though, of course, China has expressed “its strong dissatisfaction and firm opposition.” These kinds of actions that create alliances to push back against China are among those we call for in our book. We are glad to see progress being made on them and hope more is to come. Read the book and you’ll see a myriad of smart strategies to deal with China in the Xi Jinping era. 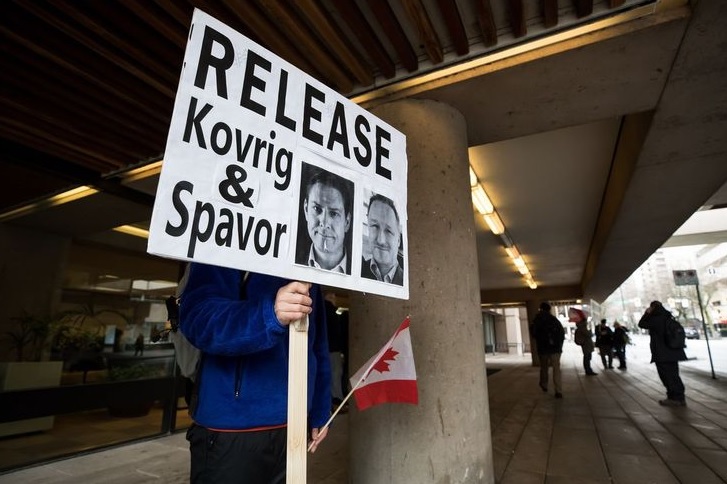 Shutting Down the Internet, We’re All In This Together, and China detaining... The Big Picture, Evil Scientist Law and China Bans Bandcamp
Scroll to top