Two weeks ago we told the story of our confrontation with Lou Dobbs. This week, in honor of the Seattle Mainers baseball team continuing its decades-long streak of embarrassing itself on and off the field, we remember the time we angered then Seattle Mariners president Chuck Armstrong. We had been invited, as a season ticket holder, to a small gathering of other such fans with Chuck and CEO Howard Lincoln. The dozen or so of us were told we could ask anything we wanted. This was before advanced statistics were used ubiquitously in baseball, before the movie Moneyball had come out. We had been following sabermetrics since the late 1980s and owned all of Bill James early books.

So, after Armstrong made his pitch about how great the Mariners would be that year, I asked him, citing a sabermetric data point, if they really would be so successful. This did not go over very well. I don’t remember how exactly he answered my question but I remember later in the session in answering someone else’s question, he waived dismissively towards me and said something along the lines of, “If you believe that guy.” He said “that guy” like I was some creepy baseball executive sexually harassing women.* The Mariners indeed sucked that season, one of an ongoing streak of twenty seasons when they did not make the playoffs. Many years later, it was revealed that three women employees had filed a lawsuit against the Mariners alleging Armstrong, among other executives, had sexually harassed them (*Perhaps he should have been angry at himself rather than me).

We don’t take great pleasure in relating this story but feel compelled to given the Mariners front office’s continued dysfunction with their current president resigning under fire this week. After all, many years before angering him, we had met Armstrong when we worked for U.S. Representative John Miller. After the meeting, Armstrong gave us a very cool-looking Seattle Mariners watch which we wore…until it broke maybe a year and a half later. Perhaps that watch is a metaphor for my favorite baseball team, a franchise I’m worried I’ll never see go to the World Series. While we await our next confrontation with an old man too confident in their priors (Editor: wait, aren’t you getting old? INTN: Yep, there’s a good chance we will unfairly yell epithets at one of our young readers any minute now). we draw the big picture, remind ourselves of the law of evil scientists, and sing a sad song about Bandcamp in China. It’s this week’s International Need to Know, swinging for the fences of international information and data.

Every once in a while it’s worth stepping back and taking a look at the big picture—the epic movie that is our crazy, mixed-up, rotating orb of a world. The Lord of the Rings; The Good, the Bad and the Ugly, or, some might feel today, The Titanic that is our globe. In the table below we list the top twenty countries as a percentage of world GDP, followed by total population and finally GDP per capita. The U.S. has the largest GDP in the world and China the second-largest. Because America’s economy is so large and China’s so populous, they also rank number one and two for percentage of world GDP. If we were wagering which country would fall out of the top twenty for percent of world GDP in the next ten years, our money would be on Saudi Arabia. Oil’s importance will continue to decline. How many of you were surprised that Ireland ranks fourth for GDP per capita? If we had additional money to play with after our Saudi Arabia wager, we’d bet that the U.S. will remain high in the GDP per capita category. Or, at least it will if the U.S. continues to attract talented people from around the world, including from the most populous countries. Note that only three countries are in the top 20 of all three categories (Japan and the UK both barely miss making the top 20 of total population and GDP per capita). Will the U.S., Germany and France make the cut ten years from now? Almost certainly the U.S. will*, but unless Germany and France attract more immigrants, and they successfully embrace them, those two European stalwarts will likely fall from the ranks of the most populous. The big picture, like critical interpretations of classic films, changes over time. 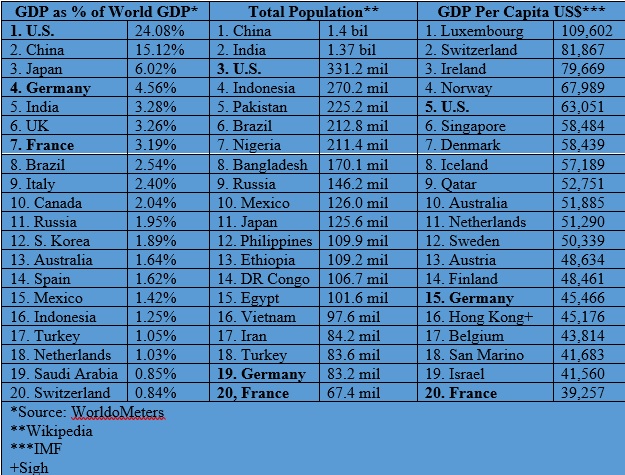 *Unless America breaks apart , something to worry about with such a large faction of Americans apparently no longer believing in democracy.

Back when the world was young–had little gray hair, no blemishes, was frisky and frolicky– in early 2017, we expressed concern about drones in this space. We noted their increased use in Afghanistan but warned the U.S. should remember it no longer had a monopoly on drone technology, “Five years ago, 11 countries were deploying drones. Today, at least 57 countries have and use drone technology.” Of course, as we predicted then, drones are even more ubiquitous today and now drones are playing key roles in battles around the world, as an article in Defense News documents. Drones were used in last fall’s Azerbaijan-Armenia war—in fact, may have been the deciding factor in the war. They were also used in Libya, “Turkey’s Bayraktar TB2 armed drone grabbed the headlines during the Libya conflict last year, which saw Turkey deploy the platform to defend the U.N.-backed Tripoli government against strongman Khalifa Hifter, who relied on Russian Pantsir systems.” In 2017, we worried that America was setting bad precedents with how it was using drones so that there would be no limits when other forces soon had them. Or as Defense News puts it, “It also means more sophisticated weapons in the hands of smaller, nonstate groups like the Houthis in Yemen using cruise and ballistic missiles and drones. It is potentially very nasty.” We quote, as we did in 2017, Moore’s Law of Mad Scientists: “The minimum IQ required to destroy the world drops by one point every 18 months.” Enjoy your afternoon! 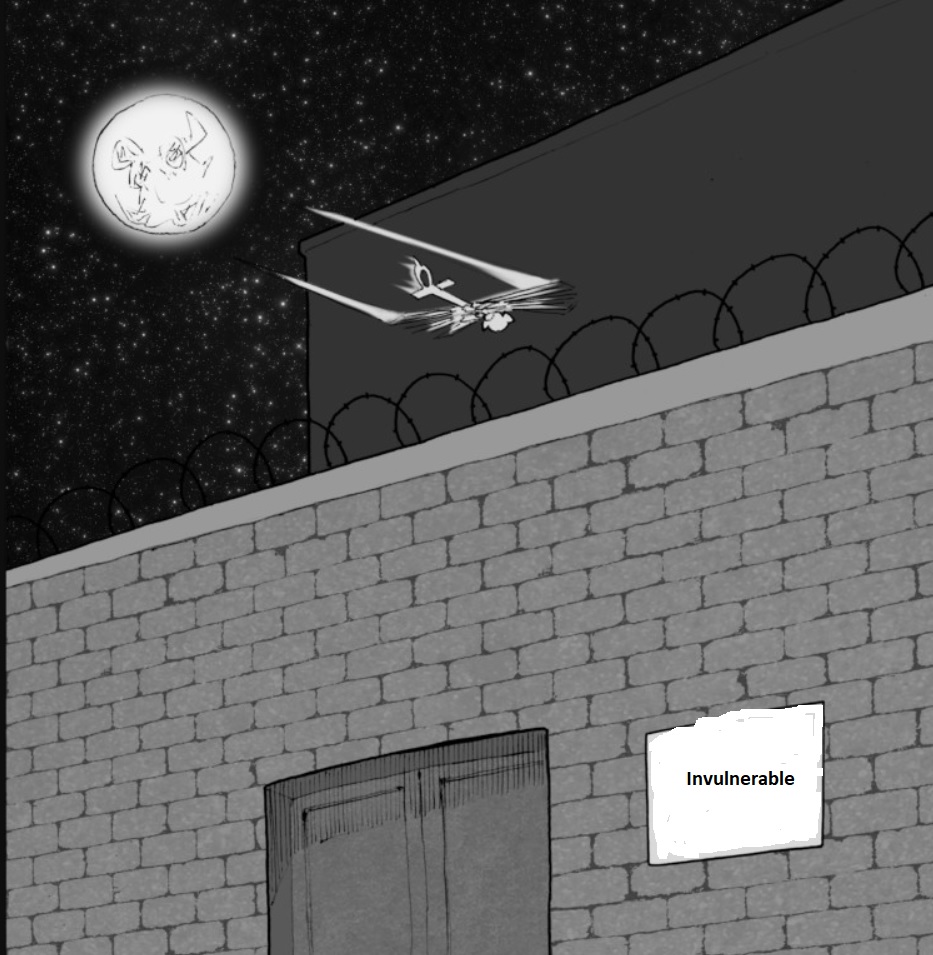 In the furor (well, minor kerfuffle is more accurate since very little was written about it) over China banning the newish social media platform, Clubhouse, you probably missed the news that China also banned the Internet music platform, Bandcamp. Apparently, many independent Chinese musicians were using Bandcamp to disseminate their music throughout the world. Soundcloud has been banned in China for years so Bandcamp was the go-to platform. This is a good reminder that China began decoupling from the United States and other parts of the world long before U.S. policy makers under Trump proposed doing so. It’s obvious why China’s government bars Facebook, Twitter, the New York Times, and many other informational sites (the CCP is scared of its own citizens) but why little old Bandcamp? What could the equivalent of Chinese Ramones, NWA or Metallica sing and rap about that would be so threatening? After all, as the linked Vice article points out, “…to legally release an album in mainland China, all lyrics must be submitted beforehand to a Department of Culture bureau for official approval.” One analyst believes the reason for the ban is protectionism, to build up Chinese indigenous platforms. In fact, big Chinese companies such as Tencent provide music streaming services. It’s an interesting world where left-wing Americans, right-wing Americans and the Chinese Communist Party are all aligned against companies such as Facebook and Google.

What SE Asia Thinks, Where Murder Rates are Decreasing and Save the Two Michaels... Covid-19 Harms Developing Countries Economies, Another Medical Breakthrough...
Scroll to top