These dissidents were inspired by the words, the concepts, found in the document written by Thomas Jefferson with help from his editing committee. They weren’t the only ones. Since the document was posted on the 1776 equivalents of social media, no combination of words has done more for freedom around the globe than those. And yet here in America, there is more consternation about them, and less celebration than ever. From NPR to elsewhere, there is skepticism and cynicism about the founding document of America. The Declaration of Independence was written by hypocrites and men with many flaws. But as we wrote in our book, Challenging China, “Thomas Jefferson was right in his assertion, even as he was wrong in his personal life, that certain truths are self-evident, that all people are endowed with certain inalienable rights, that among these are life, liberty, and the pursuit of happiness.”

The story of America, in many ways, is about trying to fulfill those words, often failing, sometimes improving and almost always arguing and fighting about them. This year’s fashionable besmirchment is a function of our focusing on a history of personalities, driven by the tyranny of narrative, at the expense of a history of ideas. But fret not, we fight for your right to understand how bad air pollution is for the world, the significance of where the richest millennials are from and whether China’s economy will grow larger than America’s. It’s this week’s International Need to Know, like Jon Batiste, I don’t know why but when I write about international information and data I feel like freedom.

Last issue we pointed out that many of China’s efforts to build coal plants in developing countries are being cancelled like a celebrity’s twenty-year-old unfashionable tweet. And we noted this is a good thing not just because of climate change worries but because air pollution has bad health effects. How bad? Examine the chart below from Our World in Data listing the top number of deaths by risk factor. Outdoor air pollution is sixth just behind obesity and just above high sodium diets (put down the pretzels). Our World in Data reports that, “Outdoor air pollution is a risk factor for several of the world’s leading causes of death, including stroke, heart disease, lung cancer, and respiratory diseases, such as asthma.” Around 3.4 million people died “prematurely due to air pollution,” which is more than eight times the number of people who died from homicide. Bad air is more dangerous than that man with a gun (though step away from the man like you do the pretzels). Among the countries where we see the highest number of premature deaths due to air pollution are Egypt, Turkey, China and India. Remember that air pollution does not just cause death but also adversely affects cognitive ability. We wonder if concentrating on this kind of data and stories will be more effective to address climate change than talking about climate change to get people to stop polluting the air. Either way, transforming energy to clean sources will have many beneficial results. 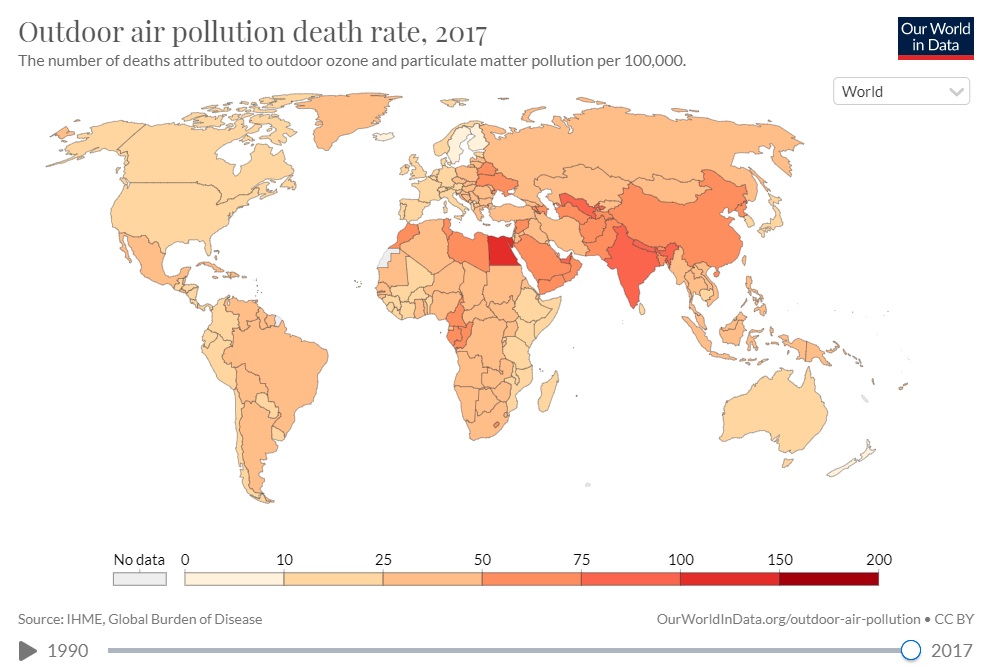 We were in the midst of re-reading the Lord of the Rings books for the first time in many decades when we saw that the first Peter Jackson movie came out 20 years ago. This is all to say to our millennial readers, you are getting old. Welcome to the club. Visual Capitalist has a list of the richest millennials in the world, who range in age from 25 to 40. Four of the top ten are from the United States and four are from China. The other two are from Brazil and Russia. They are nearly all from the tech sector and self-made not inherited, the one exception is Lukas Walton of Walmart fame. Depending on what cup of economic coffee you are drinking you may find this list a bitter sip of inequality or a smooth roasting scent of economic dynamism. We brew, you decide. But perhaps more interesting to consider is from which countries will Generation Z’s billionaires be minted twenty years from now? Will the U.S. and China still dominate? If not, why not? Show your work.

When will China become larger economically than the U.S. (in terms of nominal GDP)? One of the central assertions of our book, Challenging China, is that China’s era of high economic growth is over due to aging demographics and slowing productivity. China’s GDP growth rates in the future will be closer to the U.S. and EU growth rates than to its past 30 years of growth. That means China will not surpass nominal U.S. GDP for quite some time. Now two writers at Bloomberg assert there is a real possibility China never catches the U.S. economically. As in our book, they point to demographics and productivity challenges. They note that China’s working age population will decrease nearly 30 percent over the next thirty years.* They also point to China’s increasing debt (its credit to GDP ratio increased from 140% to 290%) and its increasing separation from the world economy. Bloomberg than creates five scenarios for Chinese and American economic growth rates based on various rates of productivity and political factors. Our best guess is the two biggest determinants for comparative GDP growth in China and the U.S. are immigration levels allowed in America and economic openness in China. Practically speaking, due to its larger population, China’s economy should become larger than America’s but it will be tough to do with a shrinking population and shrinking freedom. 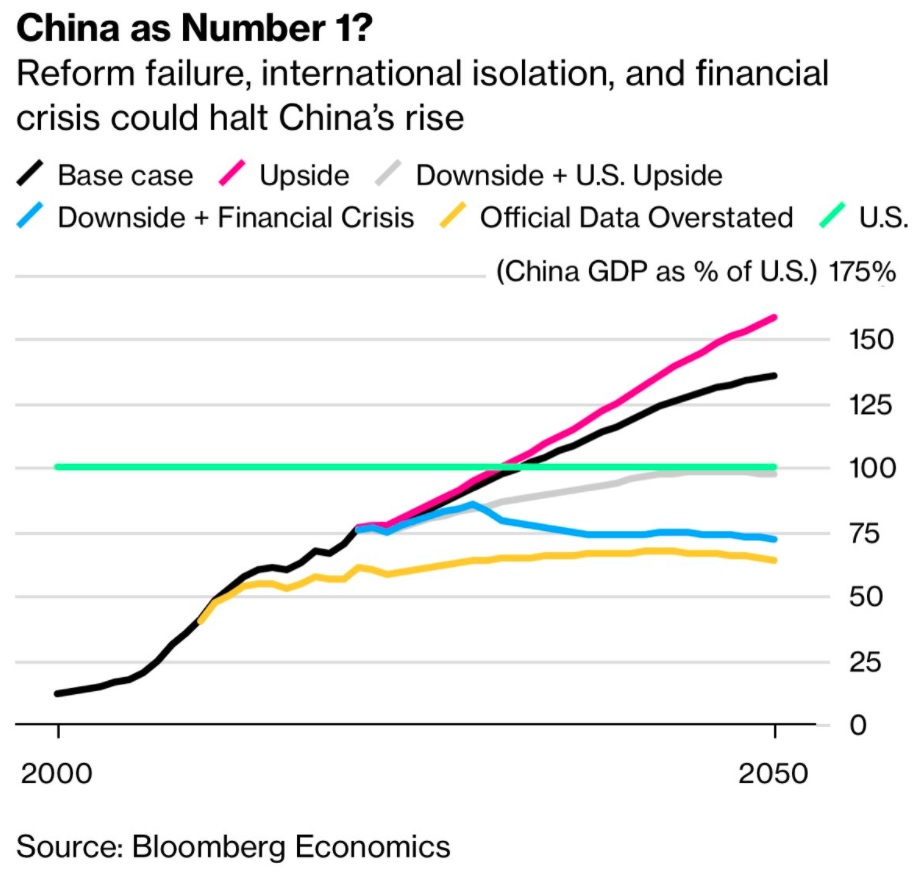 Where the Wars are, Where Vaccine Hesitancy is, and Cancelling of China Coal... Pandemic is Still Happening, Rich Countries Failing us in the Pandemic, and...
Scroll to top