Pandemic is Still Happening, Rich Countries Failing us in the Pandemic, and What Happens to Semiconductors if China Invades Taiwan

A friend recently texted us that he was driving by the old B&O Espresso located on Capitol Hill in Seattle and missed getting dessert there. We do, too, since that was where we went on our first date with our now wife. But, alas, it closed many years ago, as have just about every restaurant, bar, theater and other establishments we went to in our early dates. The world changes. We’ve been thinking about change lately, partly because it is a theme in the new book we are writing, partly because, well, we’ve been seeing lots of change. Yes, even in a year when we were mostly at home surrounded by the same four walls, spouse and cats, there has been a dizzying amount of change.

But even beyond that, we think about how much the city we live in, Seattle, has changed since we moved here in the early 1990s, how much New Orleans has changed since our first visit there in 1992, how much all of the countries we have traveled to—China, Vietnam, Israel, Botswana, Peru, just to name a few—have changed. Some of this is driven by technological advances, some by politics, some by economics, some by religious trends, some by other factors. Some of the change was for the bad, in our estimation, but much of it was for the good. Change is unsettling for many, including on occasion, us, but think how boring life would be without it. What a stagnant drab world if Seattle was mostly as it was in 1994, or if the same was true of any of those other places. China still mostly impoverished, Vietnam’s economy still centrally commanded, Israel not a tech hub, and on and on. Yes, I would have vetoed certain other changes that occurred in all those places but our world does not evolve to ever growing good.

Even New Orleans, one of whose charms is a certain timelessness, must continue to evolve or else become a museum piece like Venice has become. For example, brass bands over the years incorporated hip hop and bounce onto its call and response sanctified church roots. It’s fantastic. As long as Café Du Monde’s beignets remain, the world can and should continue to change. Even in these changing times, we note the pandemic has not gone away, how rich countries continue to fail us in it, and how China’s invading Taiwan would change the semiconductor industry. It’s this week’s International Need to Know, wishing we were the Shohei Ohtani of international information and data.

Here in more than 70% vaccinated, fully-open Seattle, it almost would be easy to think the pandemic is over. But in places where they refuse to be vaccinated (c’mon Mississippi) or in vast parts of the world where they don’t have access to the vaccine, the pandemic still rages with continued economic and variant consequences for Seattle.* Below you see the top 20 countries for new deaths per million (seven-day rolling average). In the far right column you see the percentage of the population vaccinated. South America has an abundance of countries on the high death rate list, perhaps not just because of low vaccination levels but also because it is winter and there might be some seasonality function to Covid-19. Africa continues to do relatively well for reasons not entirely understood but probably young demographics has something to do with it. And then note Chile, number ten on the deaths list, but also with one of the highest percentage of its population vaccinated. Chile has been heavily relying on China’s Sinovac vaccine which is far less effective than the mRNA vaccines, Johnson and Johnson and AstraZeneca. But don’t blame Chile, blame the stingy rich countries of the world which brings us to our next story: 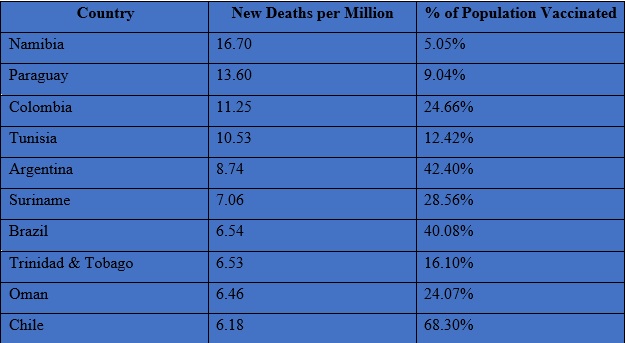 Rich Countries Continue to Fail Us in the Pandemic

America’s unwillingness to amp up efforts to vaccinate the rest of the world continues to be a moral catastrophe and the greatest foreign policy disaster of the Biden administration. After doing nothing at all, in recent months America has made great promises of delivering vaccines to the rest of the world but has barely followed through. Yes, there are many parts of America beyond Mississippi that are not vaccinated but we could still pull out all the stops to produce more vaccinations. In addition, there is more and more evidence that fractioning doses works well which would greatly increase supply for the rest of the world. But, America continues not to care about the rest of the world even though it cares about America (perhaps angrily) and the virus doesn’t care what we think, it just circulates like a teenager amped up on hormones at a kegger. Courtesy of The Telegraph, we learn that although the U.S. has promised nearly 300 million doses to Covax, the multilateral effort to vaccinate the world, it has only delivered on 25 million, about the same as China has. China is selling, not donating, lots of vaccines—less effective ones—to much of the globe. China has exported 422 million to countries around the world. Russia has exported lots of shots too. As a health expert in the article says, “They may be doing it for all the wrong reasons but at least they are doing something.”

For months, China has been talking an angry game about Taiwan and often invading its airspace with fighter jets. Two weeks ago in celebrating the CCP’s 100th anniversary, Xi Jinping, while threatening to bash in heads like a hooligan at a soccer match, also asserted in regards to Taiwan, “No one should underestimate the resolve, the will and ability of the Chinese people to defend their national sovereignty and territorial integrity.” There have been numerous articles about how easy or difficult it would be for China to invade Taiwan but last week technology writer John Stokes wrote about what would happen to Taiwan’s semiconductor industry in such an invasion. His conclusion is that if China invaded Taiwan, TSMC (one of the two most important semiconductor manufacturing and design companies in the world along with Samsung) would not be able to continue operating. That’s because among other reasons, “The equipment and tooling for making leading-edge chip fabrication plants comes from the US and Europe” who would likely no longer supply TSMC after an invasion by China. In addition, the U.S. and Europe provide a variety of critical materials to TSMC that would be immediately cut-off. TSMC’s fabrication factories would likely be damaged, perhaps sabotaged, in any invasion. And key talent for TSMC might flee. Invasion would likely cause a severe crisis in the world economy. As Stokes puts it, “So if the PRC invades Taiwan and seizes TSMC, it will be something like a decapitation strike on the global semiconductor market — a big chunk of the world’s most advanced, powerful chips made on the world’s most advanced manufacturing process will instantly stop being available during whatever invasion and transition period. This alone will upend markets and global supply chains while it plays out.” Good luck getting a new iPhone, car and thousands of other products. There’s a reason the U.S.—and China for that matter—are working to create independence in the semiconductor world. Would this dissuade China from invading Taiwan until they’ve achieved semiconductor independence (likely years from now, the U.S. might be able to achieve such in two to three years)? It certainly has to play into their calculations. At any rate, read the entire Stokes article which is full of interesting, disturbing and helpful details. Oh, and by the way, this week came news that TSMC could be temporarily halted because of Covid infections at one of its facilities